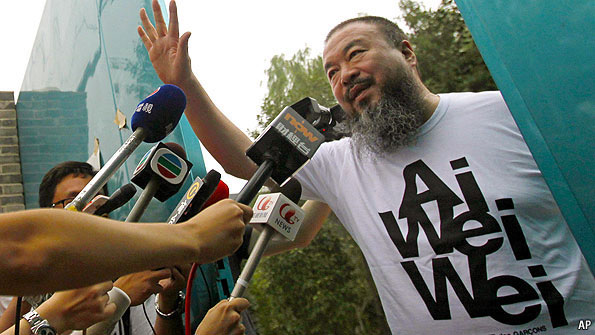 AI WEI,   a prominent Chinese artist and critic of the government, has begun to probe the limits of the strict conditions that set by the authorities upon his release from custody seven weeks ago. First it was a toe dipped back into online social-networking, a medium he had used often to air his grievances before he was seized by security forces in April, held incommunicado in a padded cell for 81 days and intimidated into silence. It began with a Google+ account he opened in late July, on which he declared himself, in a sarcastic reference to police allegations, “a suspected pornography enthusiast and tax evader”. Then on August 7th he returned to Twitter, to which he had posted tens of thousands of messages before he was taken. This week he has twittered furiously about the authorities’ treatment of other Chinese activists.

Two days later Global Times, an English-language Beijing newspaper, broke ranks with other state-controlled media, which have kept their distance from Mr Ai in recent weeks. In what it called the artist’s first interview since his release the newspaper quoted him as saying, “I will never stop fighting injustice.” But it said the interview was given on condition that questions not be raised about his detention. When the police released Mr Ai, they ordered him not to discuss in public what had happened, to refrain from using social media and to stay in Beijing. These restrictions, they said, would apply for one year. They also told him to keep his mobile phone switched on at all times, to help them keep track of his movements.

A source familiar with Mr Ai’s circumstances, however, has provided us with details of his sudden transformation—from one of China’s most high-profile activists into detainee number 1135—after he was whisked away from Beijing airport on April 3rd with a hood over his head by men refusing to identify themselves. The official media said that Mr Ai was suspected of tax evasion and described his detention as a form of house arrest. But his interrogators at the two secret locations where he was held, about an hour to 90 minutes’ drive out of the city, focused more on politics than on taxes and the other issues (such as his spreading “pornography” by posting artistic nude photographs of himself online) that the Chinese media dwelled on. His questioners said that his various alleged crimes, including that of “subverting state power”, could result in several years’ imprisonment. This account contradicts that of Chinese officials, who have accused the Western media and governments of “politicizing” an ordinary tax case.

The description given by the source suggests that the authorities were at pains to ensure that their high-profile detainee (who is the son of one of the Communist Party’s most revered poets, the late Ai Qing) came to no physical harm. The source says Mr Ai was not treated violently and was given far better attention for his type-2 diabetes and high blood pressure than he normally got as a free man. His often ill-controlled blood-sugar levels “became healthy and stable”, says the source. Possibly to prevent him doing any harm to himself, two uniformed guards were posted in his cell around the clock, with a rotation every six hours. The source says that Mr Ai was spared punishments that guards told him were often meted out to prisoners, such as being required to make his bed to an absurd degree of perfection. Others, he was informed, were treated 100 times more severely.

During two to four hours of questioning each day, he was asked many questions about his contacts with foreigners, his activism and his postings online. The interrogators, says the source, were clearly disturbed by some of Mr Ai’s art and its mocking of the Communist Party. One work they mentioned was a photograph of a middle finger being held up in front of Mao Zedong’s portrait at the entrance to the Forbidden City. Mr Ai, says the source, told them that the Forbidden City represented China’s pre-Communist “feudal” culture so they should not mind. He also told them he had done a similar work in front of the White House in Washington, DC. The interrogators said that was a matter for the American police to deal with.

Four of Mr Ai’s associates who were detained at the same time appear to have suffered worse. Mr Ai only learned about their treatment after his release (he was not allowed to leave his cell except for trips to a lavatory, which he had to request, like everything else, by first saluting his guards). Two of them were kept handcuffed for many days. One suffered a heart attack.

The source says Mr Ai had been fully expecting to spend at least the next five years in prison and was shocked by his release. This has also puzzled many observers. It is possible that China was getting worried about the international outcry over Mr Ai’s case. But foreign criticism of China’s human-rights record, especially in recent months, during which Chinese leaders have been especially anxious to crush dissent in order to prevent an Arab-Spring-style uprising, has rarely proven so rapidly effective. It is also possible that Chinese leaders were divided over how to treat Mr Ai given the party’s reverence of his father. In another unexpected development, the authorities in the south-western province of Sichuan released an activist, Ran Yunfei, who had been detained in February and accused of subversion, a crime that often incurs a lengthy jail term. Mr Ai, in his recent Twitter postings, had been calling for Mr Ran to be set free.

It is unclear how the authorities will respond to Mr Ai’s return to online campaigning. The source said Mr Ai was expecting the police, who frequently visit him at his studio in north-eastern Beijing, to raise objections to his twittering. But he said Mr Ai felt he had no choice given the way colleagues had suffered because of their links with him. It remains unclear whether the authorities will allow him to take up a teaching post in Berlin which he recently accepted. He is followed everywhere, the source says, with agents even hiding behind trees when he takes his son to the park. The police have made it clear, however, that he should focus more on his art.