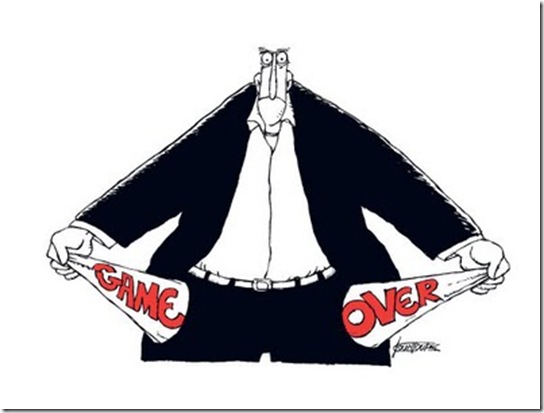 Goldman Sachs, the nation’s fifth-largest bank by assets, systematically misled clients, sold them financial instruments it knew to be junk, bet against them and profited off of their losses, according to a Senate report released this week.

The report, the product of a two-year investigation, paints the firm as Exhibit A of Wall Street’s evolution from a place that raises and deploys capital to worthy businesses into a vulturous creature that preys on unwitting investors.

Goldman’s conduct in the two years leading up to the near-implosion of the financial system show a firm dedicated to “sticking it to their own clients,” said Senator Carl Levin, a Michigan Democrat who chairs the panel that produced the report. “Goldman gained at the expense of their clients, and used abusive practices to do it.”

In 2006 and 2007, Goldman recorded more than $21 billion in profit thanks to a strategy that ensured earnings as the housing bubble inflated and then popped. It also dodged a loss in 2008 — one of the few firms to do so — during a year that saw the demise of three of its direct competitors.

The “abusive” tactics the firm employed helped gain those winnings, according to the report by the Senate Permanent Subcommittee on Investigations. While Goldman was betting — or “shorting,” in Wall Street parlance — that securities would collapse, clients were on the losing end.

“Of course we didn’t dodge the mortgage mess,” Goldman chairman and chief executive Lloyd C. Blankfein explained to a colleague in a Nov. 18, 2007 email documented in the report. “We lost money, then made more than we lost because of shorts.”

Four complex financial instruments with names like Timberwolf and Abacus show how the firm profited while others lost, according to the Senate report.

Timberwolf was a $1 billion collateralized debt obligation squared, meaning it was a financial instrument comprised of other CDOs that were backed by various types of securities, like mortgage bonds and insurance contracts. Goldman issued the security, formally called Timberwolf I, in March 2007. It began to lose value almost immediately upon issuance.

But Goldman was a step ahead of its clients. It immediately shorted about 36 percent of the assets underlying Timberwolf, meaning it would profit off their demise. Investors were kept in the dark about this development, according to the Senate report.

In May 2007, Goldman promised one future buyer it could earn a 60 percent return on its investment in Timberwolf, even though Goldman’s interval valuations of the security showed the CDO was continuing to fall in value, the report notes.

The prospective buyer, a hedge fund named Basis Capital, finally bought slices of Timberwolf on June 18 of that year, at prices of 84 cents and 76 cents on the dollar. Less than a month later, Goldman marked them down to 65 and 60 cents.

Even Goldman salesmen had second thoughts about the firm’s practice of marking down securities within days or weeks of a client’s purchase.

“Real bad feeling across European sales about some of the trades we did with clients,” one of the firm’s salesmen wrote in an October 2007 email to the head of Goldman’s mortgage unit, Daniel Sparks. “The damage this has done to our franchise is significant. Aggregate loss for our clients on just…5 trades alone is 1bln+ [more than $1 billion].”

A few months earlier, a senior Goldman executive warned his colleagues about selling clients securities at one price and then immediately devaluing them.

“[D]on’t think we can trade this with our clients [and] then mark them down dramatically the next day,” Harvey Schwartz wrote in a May 11 email.

On July 13, Basis told Goldman that one of its funds was in “real trouble,” according to the Senate report. Three days later, Goldman marked down those securities to 55 and 45 cents on the dollar. Within weeks, Basis Capital liquidated its hedge fund.

Goldman bought back the Timberwolf securities at prices of 30 and 25 cents on the dollar.

Last week, another bank, Wells Fargo was fined $11 million by the Securities and Exchange Commission because the firm it took over, Wachovia, did something similar when it sold a client a slice of a security at 90-95 cents on the dollar even though Wachovia internally valued it at 52.7 cents on the dollar. In announcing the settlement, the SEC’s director of enforcement, Robert Khuzami, said the lender violated “basic investor protection rules — don’t charge secret excessive markups, and don’t use stale prices when telling buyers that assets are priced at fair market value.”

In the end, though Goldman eventually lost some money on Timberwolf because it couldn’t sell all of it, its losses were offset by profits made from betting those securities would fall in value. Goldman profited “at the expense of its clients,” according to the report. Meanwhile, the buyers lost virtually everything. Basis Capital ended up declaring bankruptcy.

Another CDO, called Hudson Mezzanine 2006-1, was a $2 billion financial instrument brought to market in December 2006.

Goldman shorted all of Hudson, meaning it would profit if any of the slices lost value, according to the Senate report. Goldman “failed to disclose to potential investors that it was shorting the very securities [it] was selling to them,” the report notes.

Instead, Goldman told investors that it had “aligned incentives” with them because it invested in a portion of Hudson. The report called that “misleading” because Goldman’s $6 million bet that Hudson would rise in value was “outweighed many times over by Goldman’s $2 billion short position.”

Goldman also told investors that the assets underlying Hudson were “sourced from the Street,” as in other Wall Street firms. In reality, all of the assets were acquired from a unit inside Goldman. Two Goldman executives later told Senate investigators that the firm’s original description was accurate because Goldman was part of “the Street.”

Goldman made a $1.35 billion profit off Hudson, earnings the Senate report described as coming “at the expense of [its] clients.”

In Abacus, Goldman allegedly helped set up the mortgage-linked investment for a favored client, designing it to fail, yet sold it anyway to its other clients, reaping the favored client nearly $1 billion. Last year, the SEC charged Goldman with securities fraud. The firm later settled the accusations for $550 million.

In Anderson, the Senate report claims Goldman bet that 40 percent of the assets underlying the deal would decline in value. Investors were never told. They also weren’t told that Goldman expressed reservations about the quality of the subprime mortgages that helped make up Anderson.

Anderson investors were eventually wiped out and lost virtually their entire investments, according to the Senate investigation.

Previously, Goldman has defended its conduct and rejected accusations it did anything improper during the leadup to the financial meltdown.

“Goldman Sachs did not engage in some type of massive ‘bet’ against our clients,” the firm said in a statement last year. “[We] never created mortgage-related products that were designed to fail.”

The firm also has said that buyers of such securities were “large, sophisticated investors” that had “significant in-house research staff to analyze portfolios and structures and to suggest modifications.”

The investors “did not rely upon the issuing banks in making their investment decisions,” Goldman said in a December 2009 statement. Also, the firm maintains that “it is fully disclosed and well known to investors” that Wall Street firms that arranged CDOs initially shorted the securities and that “these positions could either have been applied as hedges against other risk positions or covered via trades with other investors.”

“Many major banks had similar businesses,” the firm noted.

The report makes note of federal securities laws that Goldman may have violated.

“Goldman…had an obligation to disclose material information that a reasonable investor would want to know,” the report notes.

Last year’s financial reform law includes a section authored by Levin that tries to clean up the markets by prohibiting firms from betting against securities they sell to their clients. Levin pointed to Goldman’s activities as a primary reason for why he wanted that in the new law.

As of 3 p.m. New York time, Goldman shares were down more than 3 percent since Levin’s report was publicly released. The Standard & Poor’s 500 Index is up about 0.6 percent.