After detecting life on Mars in 1976 and sweeping it under the rug, NASA banned life-detection experiments to hide the truth from the world

Yes, there is life on Mars, and NASA has known about it for four decades. Their own Viking lander experiment confirmed the presence of life on Mars, but instead of sharing this groundbreaking discovery with the world, NASA chose to bury the truth and hide the science for decades.

Now, the former NASA engineer who designed the experiment that confirmed the presence of life on Mars is speaking out. His name is Gilbert V. Levin, and in a new op-ed published in Scientific American, he lays out his belief that life was already confirmed on Mars in the 1970s.

“I was fortunate to have participated in that historic adventure as experimenter of the Labeled Release (LR) life detection experiment on NASA’s spectacular Viking mission to Mars in 1976,” writes Levin. “On July 30, 1976, the LR returned its initial results from Mars. Amazingly, they were positive. As the experiment progressed, a total of four positive results, supported by five varied controls, streamed down from the twin Viking spacecraft landed some 4,000 miles apart. The data curves signaled the detection of microbial respiration on the Red Planet. The curves from Mars were similar to those produced by LR tests of soils on Earth.”

As word of the discovery spread, many other scientists around the world began to rejoice. Levin even received a personal phone call from Carl Sagan, congratulating him on the discovery.

But within hours, NASA buried the results and swept it all under the rug, claiming the mass spec instrument hadn’t detected life at all.

NASA banned any experiment that could confirm life on Mars

From that day forward, NASA banned life detection experiments on Mars missions in order to continue the science fraud. “Inexplicably, over the 43 years since Viking, none of NASA’s subsequent Mars landers has carried a life detection instrument to follow up on these exciting results,” writes Levin.

Get more news like this without being censored: Get the Natural News app for your mobile devices. Enjoy uncensored news, lab test results, videos, podcasts and more. Bypass all the unfair censorship by Google, Facebook, YouTube and Twitter. Get your daily news and videos directly from the source! Download here.

In truth, NASA is a fraudulent “science” organization that has, for four decades, pushed the false narrative that there is no life on Mars. The cover-up has been well coordinated and aggressively enforced. And since it’s impossible for private citizens to visit Mars and see for themselves, it’s difficult for anyone to prove that NASA has been lying all these years.

But now new evidence is surfacing that NASA has been blatantly lying all along… not just about microbial life on Mars but even about the existence of a Martian atmosphere that could support life.

(I reported on this last year in a popular podcast that was banned by YouTube. It’s now available on Brighteon.com, where real science videos are welcomed.)

Earlier this year, the corporate media began reporting that NASA was sending a scout helicopter to Mars as part of the 2020 lander mission. This helicopter, touted by NASA administrator Bridenstine, is a dual rotor, solar-powered helicopter designed to map terrain for the lander rover. See this UPI story as an example of what’s being reported by the scientifically illiterate media:

The problem with this story? According to NASA and the entire news media, Mars has virtually no atmosphere. Obviously, rotor-powered aircraft don’t function without an atmosphere, since they can’t produce lift in a vacuum.

According to NASA, the atmosphere on Mars is only 600 Pascals at ground level. Earth’s atmosphere at sea level is 101,000 Pascals, and even with that “thickness” of air, it’s still difficult to get a mechanical craft of the ground using spinning rotors.

Yet according to NASA, we’re supposed to believe that a dual-rotor helicopter will fly in virtually no atmosphere, powered by on-board solar panels and batteries, somehow defying gravity that’s 38% of Earth’s gravity with an atmosphere that’s only 0.6% as thick.

Any aeronautical engineer will tell you that’s impossible. If rotors worked in a vacuum, then the space shuttle would have a giant propeller mounted on its nose, doing away with all the rocket thrusters. 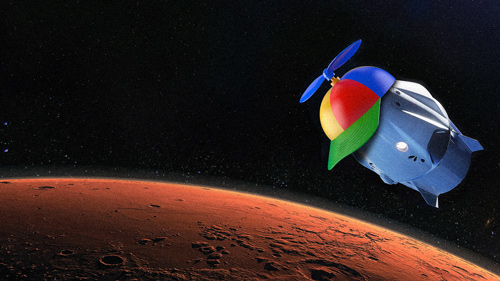 The only way a helicopter will fly on Mars is if there’s an atmosphere to create lift when the rotors spin. This isn’t rocket science. In fact, it doesn’t involve rockets at all. Propellers don’t work in a vacuum.

To try to convince us all that they have developed a helicopter that can fly in (nearly) a vacuum, NASA has released some of the most hilarious, laughable video footage we’ve ever seen.

As you can see from the following video snippet, NASA has developed a self-crashing helicopter that can only bounce and crash. The fact that NASA wants us to believe this is going to be loaded up with imaging and telemetry equipment — plus solar panels and batteries — is absurd. It’s like a bad Saturday Night Live skit. Notice, too that this “helicopter” isn’t even carrying batteries and appears to be receiving its power through a tether that’s attached to the center of the floor.

It’s almost as bad as CNN’s fake Iraq War broadcast featuring Charles Jaco, which was completely staged in a studio, where CNN pretended to be in Saudi Arabia and its journalists pretended to be under a gas attack or a SCUD missile attack… we’re not sure which since once of them put on a helmet and the other donned a gas mask. It’s some of the most hilarious “news” that has ever been broadcast.

Now, NASA seems to be in the business of faking its announcements, too. If we are to believe NASA, there’s no life on Mars and helicopters fly in vacuums. And if we are to believe CNN, then President Trump conspired with the Russians to steal the election, and… oh yeah… carbon dioxide is a “poison” for plants and will kill everything on the planet. (In reality, CO2 is the single most important nutrient for plant life across the planet.)

The bottom line? NASA is lying all the time, just like CNN and all the other fake news media. See Suppressed.news for more stories focused on real events and discoveries that have been suppressed by the establishment.

Stay informed about space and science by reading Space.news or Science.news, both truly independent media sources for real news that you won’t find covered in the lying corporate media.