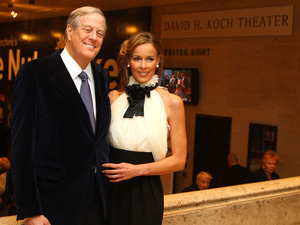 Chances are you’ve never heard of Charles and David Koch. The brothers own Koch Industries, a Kansas-based conglomerate that operates oil refineries in several states and is the company behind brands including Brawny paper towels, Dixie cups, Georgia-Pacific lumber, Lycra fibers and Stainmaster carpet. Forbes ranks Koch Industries as the second-largest privately held company in the U.S. — and the Koch brothers themselves? They’re worth billions.

And in the past 30 years, they’ve funneled more than $100 million into dozens of political organizations, many of which are trying to steer the country in a more libertarian direction. Among the organizations they’ve backed are the Cato Institute, a Washington think tank that has recently raised questions about climate change, and the Mercatus Center at George Mason University in Virginia — which one Democratic strategist called “ground zero for deregulation policy in Washington.”

The brothers also have created several neutral-sounding groups like Citizens for a Sound Economy — which staged media events to oppose President Clinton’s proposed Btu tax on energy — and Citizens for the Environment, which called many environmental problems, including acid rain, “myths.”

David Koch founded the group Americans for Prosperity Foundation, which has been linked to the Tea Party — training hundreds of activists in Texas and hosting talking points for Tea Party activists on its website.

Jane Mayer, a staff writer at The New Yorker, profiles the brothers and their political connections in the Aug. 30 issue of the magazine. Her article “Covert Operations” describes how the brothers’ political interests “dovetail with [their] corporate interests.”

In Their Own Words

On Thursday’s Fresh Air, Mayer joins Terry Gross for a conversation about the Kochs’ funding efforts, particularly what she describes as their broad and vigorous campaigns to manufacture grassroots political opinion. As she notes in the article, “the brothers have funded opposition campaigns against so many Obama administration policies — from health care reform to the economic-stimulus program — that, in political circles, their ideological network is known as the Kochtopus.” (Koch Industries has responded to Mayer’s article and other coverage with a set of “Koch Facts” published on its website.)