Losing hearts and minds they never had

By Clayton Swisher in Asia 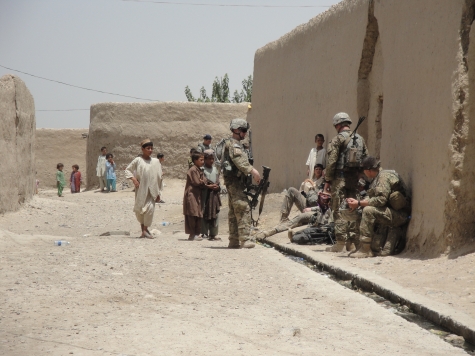 Fighting the Taliban in Arghandab – where much of its history is based – is like taking on the Italian Mafia in Sicily. As far as war goes in Afghanistan, it remains one of the toughest areas of fighting.

Last night we got a 0345 wakeup call from Spooky. For those of you who play Call of Duty-type video games, you’ll know what I’m talking about. For those who don’t, Spooky is the Vietnam-era call sign for the AC-130U Gunship, a massive airplane that blasts 105mm artillery and 40mm shells from its fuselage.

It was raining death and destruction on a position just a few kilometres from us across the Arghandab River. The Taliban have virtual free reign west of the river and have made a mockery of American forces setting up Forward Operating Bases in their midst.

There aren’t too many Spooky Gunships here in this country. They are flying collateral damage machines, used by the Air Force Special Operations to support commandos on the ground. But their employment over the skies of Arghandab signals a reality that most soldiers here understand: that conventional army tactics have failed to wrest this real estate from the Taliban.

Fighting the Taliban in Arghandab – where much of its history is based – is like taking on the Crips in LA’s Compton or the Italian Mafia in Sicily. As far as war goes in Afghanistan, the Arghandab and neighbouring Panjwaye and Zahri Districts remain the toughest areas of fighting. From Arghandab it is an easy ride to Kandahar, where insurgents stage and conduct attacks against the Afghan government and Isaf forces in the country’s second largest city.

As I fell back asleep, I couldn’t help but trust that the Taliban would have the final answer. Since we started this embed on July 14th, their attacks have been as harassing a presence as the blazing hot, 45 degree Celsius temperatures. Rocket launches during our check in at the Kandahar Airfield. Small arms fire at the Forward Operating Base once we arrived. The unmistakable sound of roadside bomb detonations – every day since we’ve been here – somewhere in the tangle of Arghandab’s lush orchards and mud villages.

The soldiers getting hit the hardest are a replacement unit near our perch at Forward Operating Base Sarkari Bagh. A few kilometres across the river, at Combat Outpost Nolen, a platoon of men from the 101st Airborne have gone to “combat ineffective” after just weeks of being here. They arrived in Arghandab in early July with 17 men. Only 9 remain.

Thus the late night calls from Spooky. Though pummelling the villages around Western Arghandab will hardly bring a solution, however good the vengeance feels.

The unit we’ve embedded with, Delta Company of the US Army’s 82nd Airborne, 2-508th Parachute Infantry Regiment, seem to get that. They’re short timers here in Arghandab.

They have just a few weeks left in their year-long deployment. They’re not thinking much about policy discussions back in Washington over whether this country should split along the predominantly Pashtun South and more ethnically-mixed North. Soldiers we’ve joined out on patrol here have told me bluntly that as soon as the Isaf packs up “this country will go straight to civil war,” which might anyhow bring that partitioned outcome, policymakers be damned.

For most US troops here, the goal is to get home alive, after so many dozens from their Regiment have been sent home crippled, or worse, from the Taliban’s lethal tactics, supported by many here in the South.

This is a snapshot of the war being fought here in Arghandab. Men lacing up their boots to fulfil their required patrols, thankful to come back alive, falling asleep to the sound of exploding ordinance. They hope it’s the Taliban blowing themselves up while seeding their bombs.

But oftentimes they learn the next day it is not. Whenever their Internet access is cut – which has been often, since summer fighting season began – they know the dead includes someone from within their unit, sprawled out in this area. It’s a paltry measure aimed at preventing fellow members of their unit from emailing home about casualties before the families of the fallen have been formally and properly notified.

Thousands of miles away, no doubt Washington politicians and America’s foreign policy elite are readying their minivans for August vacation or re-election campaigning.

The soldiers here feel out of sight-out of mind, and one has to wonder after visiting the Arghandab if they might be right.

From neighbouring barracks, the sombre metal lyrics have droned all day with Alice in Chains’ “The Rooster.” It aptly sums their sentiment, helping others either to sleep, or in this case, through one more night on patrol:

Ain’t found a way to kill me yet

Seems every path leads me to nowhere

Army green was no safe bet

The bullets scream to me from somewhere

As we finish our day and settle down once again to sleep, the sound of Spooky returns. The bass shakes the ground as its cannons belch rounds. Bright orange chaff drops, as Spooky makes its slow left banking turn repeatedly while firing on the Arghandab villages. A full moon gives away the madness of it all.

Desperation, really, for a coalition that has little chance of winning after nine years of conflict.