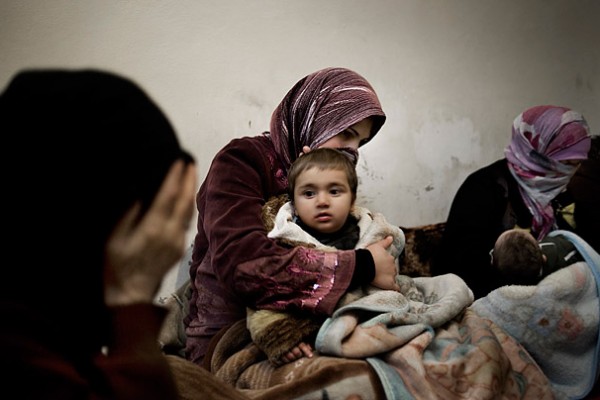 The reason that there’s no plausible end-game in Syria anytime soon — and that thousands more Syrians may be fated to die before the conflict is ended — is that the Assad regime is fighting a very different war to the one envisaged by many of its opponents. For Arab and Western powers, and many Syrians, President Bashar Assad is a doomed despot desperately holding on by force to the power he can never hope to exercise by democratic consent. But for Assad — and more importantly, for the minority Allawite community on which his regime is based — this is an existential struggle against an implacable sectarian foe. A majority of Syrians may be fighting for their rights and dignity; for the ruling minority it’s a battle to avoid the fate that befell Iraq’s Sunnis after the fall of their brutal benefactor, Saddam Hussein.

There’s no way of establishing its veracity, but one anecdote from the tormented city of Homs speaks volumes about how Syria’s power struggle is likely to play out: As regime forces continue to exact an horrific toll in their bombardment of Bab Amr and other opposition-controlled Sunni neighborhoods, residents in adjacent Allawite communities allege that the rebels are retaliating for regime attacks by firing mortars into Allawite neighborhoods. The Allawites of Homs, so the tale goes, are livid that the regime hasn’t more forcefully crushed the uprising, accusing President Assad of being too fearful of foreign intervention to smash the rebel forces with the ruthlessness his father would have mustered.

The story could be true, or it could simply be  propaganda fare aimed at whipping up Allawite fears — either way, though, it resonates with the deep fear of sectarian retribution among the minority sect that constitutes the key pillar of the regime’s support. Whatever their views of Assad, many Allawites — a community in which, by some estimates, every family has at least one member in the security forces, and which dominates the key structure of power — are willing to fight to preserve the system of minority rule over which he has presided, first and foremost out of fear of the alternative.

At least two thirds of Syria’s population are Sunni Arabs, yet the country is ruled by an authoritarian regime dominated by Allawites — a syncretic offshoot of Shi’ism that comprises some 12% of the population. But the Assad regime presents itself as the guarantor of the interests not only of Allawites, but also Syria’s Christians (10%), Kurds (10%) and smaller communities of Druze, Yazidis, Ismailis and Circassians — against the specter of a vengeful sectarian Sunni Muslim Brotherhood. No surprise, then, that the regime has, through its own violent strategy, encouraged the rebellion against Assad’s rule onto the path of sectarian civil war. Call it Assad’s Milosevic option, in which the despot narrows the political alternatives, and forces minority groups to either support his regime or stay on the sidelines for fear of the alternative.

Syria’s demographic picture would be incomplete without mentioning the presence of some 1.2 million refugees from Iraq — the equivalent some close to 5% of Syria’s population. Their presence, testimony to the sectarian chaos unleashed in Iraq by the U.S. toppling of Saddam Hussein, has reinforced the caution of many Syrians — including the more secular urban Sunni elite — over armed rebellion or seeking foreign intervention to oust Assad.

Two thirds of the Iraqi refugees in Syria are Sunni Arabs, and a further 10% are Christian. The lesson for Syria’s minorities is stark: One in seven Christians who lived in Iraq in 2003 is now a refugee in Syria; those left behind are an increasingly embattled community, while even in newly democratic Egypt, the Christian minority is feeling increasingly put-upon by the now dominant Sunni Islamists. For the Allawites, there’s a portent of their own prospects in the fate of Iraq’s Sunnis — a minority community that had been the foundation and prime beneficiary of Saddam Hussein’s authoritarian Ba’athist regime. Even in the best-case outcome, a democratic Syria would sweep Allawite elites out of their dominant position in the security forces and the state; more likely, in their minds, is the sort of violent retribution suffered by Iraq’s Sunni communities at the hands of the long-suffering Shi’ites.

Thus the loyalty of the core security forces to the project of keeping Assad in power — such defections to the rebel Free Syrian Army as are occurring are largely confined to the Sunni conscript forces on which the regime was never going to rely to protect itself from an internal rebellion, any more than Saddam Hussein was going to rely on Shi’ite conscripts rather than his Sunni-dominated Praetorian units to protect him from a popular uprising.

Neither Assad, nor many in the core community represented by his regime, would have seen much incentive to embrace the Arab League plan that removed him to make way for a democratic transition. Moreover, the Arab League response being driven by the not-exactly-Jeffersonian Sunni monarchies of the Gulf would reinforce the tendency in Damascus to read it through the lens of the Saudi-Iranian Cold War.

The Saudis had seen an (admittedly troublesome) ally in Saddam Hussein replaced by an Iran-aligned Shi’ite government in Baghdad; now they  have a chance to replace an Iran-aligned crypto-Shi’ite regime in Damascus with allies of their own. And some in Israel seem to concur, with former Mossad chief Ephraim Halevy writing that ousting Assad’s regime has become the priority task of those looking to confront Iran.

Instead of going quietly, the regime and its core constituents have opted to fight, presumably believing that even if they can’t win — the rebellion is more resilient than ever after nearly a year of brutal bludgeoning — they may at least come away with some kind of a draw, at least in the sense of being present at the table holding some decisive cards when a political solution is negotiated rather than shunted aside by a transition to democratic rule.

The Arab League peace plan that would have had Assad step aside and hand power to a national unity government pending new elections may have already been eclipsed by events on the ground, which are looking more like the early days of the wars that broke apart the old Yugoslavia than like the rebellions in Egypt, Yemen or Libya. Of course Milosevic’s brutal wars eventually prompted limited NATO intervention, but only enough to eventually force him to the table to talk peace after four years of fighting. (His day of reckoning came five years later when he was overthrown in a popular rebellion, and eventually sent for trial at The Hague.) Assad may be hoping to emulate Milosevic at least in so far as he forces himself into any peace equation.

Russia is prompting Assad to consider talking to opponents now in order to end the violence (as distinct from stepping down) but it’s unlikely that he’ll be wiling to offer much that his opponents would be willing to accept at this point. For those who have taken up arms against all odds to face the tanks of the regime, this is a desperate fight to the finish.

But despite the stalemate, there’s little prospect for foreign military intervention. Western powers that have no appetite for another entanglement in an intra-Arab civil war had been hoping that Turkey or Arab partners may take on the challenge, but even they are hesitant to be sucked directly into what could be a dangerous quagmire — although pressure could mount for more limited forms of intervention to reinforce the rebels and weaken the regime.

More likely is a ramped up effort, openly or discreetly, to arm and enable the outgunned opposition forces in order to even up the fight on the ground. Even that’s a risky prospect, however, given the fragmented nature of the opposition forces, over which there is no clear and credible chain of command. It may be preceded by efforts to organize the rebellion into some sort of cohesive shape. So, arming the rebels effectively assumes a protracted war rather than any quick fix. And as the Gulf Arab countries take a lead in arming the rebellion, Iran will do what it can, with the help of its allies in Baghdad, to shore up the regime. It may yet take a protracted morbid interregnum in which each side tests the other’s capacity to absorb pain before any political solution becomes the more desirable alternative for both.