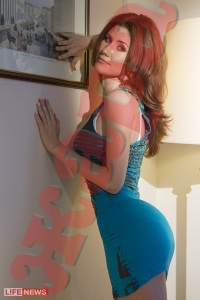 Today, I bring you, yes, Anna Chapman. In the middle of a heat wave, this hottie participated in a photoshoot with Russian tabloid Zhara (or “Heat” [Lord, the puns]), a rag on which she spent a long time deciding, fielding as she was, several offers to sell herself for her country yet again.

But, it’s been a while, appetite for her not-that-hotnoess has somewhat abated so shit’s gotta git sturred up for them ‘zines to move off the shelves, especially with inflation about to hit 8%.

So we do a little teaser.

Mizz Chapman leaks some photos of her taught yet voluptuous arse all over her Facebook page, Zhara discovers it, throws hissy fit, sues. And we say, “Anna Chapman was in a photoshoot?!?!!”

Anna Chapman was in a photoshoot wearing clothes she clearly picked out herself to match her glaring white bra. (Seriously, she couldn’t at least have gone with those gauche “invisible” straps that are, by the way, totally visible?) Also, blue shoes. Girlfriend brought a pair of pumps in a rather binding shade of blue in what was probably what-the-hell-I-deserve-it-I’m-fabulous kind of moment. She continues to look pissed.

But hell, why am I describing all this when LifeNews, of course, has a video of the ridiculous shoot. Eat your hearts out.