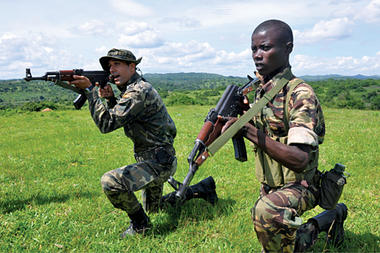 A Spanish military trainer works with a Somali Army soldier at Bihanga training camp, Uganda. Some 150 European instructors are here.

Somalia’s Western-backed transitional government controls only a few square blocks of the capital, Mogadishu. If programs like this one fail, it could pave the way for Al Qaeda-linked Islamists to take full control of this strategically located country.

Clutching an AK-47 in a field two countries away from his homeland, Aden, a former street kid, refugee, and nurse, is one of the first recruits in an ambitious program run by the European Union (EU) to help train 2,000 soldiers for the fledgling Army of Somalia’s fragile Transitional Federal Government, or TFG.

“Somali children, grandfathers, and grandmothers are dying in the streets,” says Aden. “That is why I came to be a volunteer, to change what is happening in my country.”

Involving 150 instructors from 14 EU countries at a cost of $6 million to European taxpayers, the program is the latest in a series of internationally funded training efforts around East Africa designed to bolster the beleaguered government and nudge Somalia closer to peace after almost two decades of conflict.

Money for logistical support is coming from the United States, which has reportedly already pumped millions of dollars into similar smaller training programs run by local militaries in Uganda and Djibouti over the past 18 months.

A complement to Ugandan training

Split into two six-month blocks, the program is designed to complement basic training conducted by the Ugandan Army and focuses on selecting officers to lead the government forces. Recruits are supposed to be screened by the government back in Somalia to ensure they come from a cross section of clans and will undergo lessons ranging from land-mine detection to human rights.

From logistics to language issues, the program faces a number of obstacles.

“Obviously, there is some work to be done. But we are ready for the job, and all the trainers here come from the best troops in Europe,” says training coordinator Emmanuel Hotellier, from the French Foreign Legion. “We are working hard to develop some esprit de corps and loyalty to the transitional government amongst the recruits.”

That will be a long process, however.

Described by UN experts as “a composite of independent militias loyal to senior government officials and officers who profit from the business of war,” Somalia’s security force has also been riddled with competing clan allegiances.

Earlier programs to train soldiers and policemen foundered when desertion rates went as high as 80 percent, with recruits defecting to join the Al Qaeda-linked Al Shabab militia. Other trainees have been siphoned off by senior Somali officials for their own personal protection.

(The UN this week condemned the increasing use of children in conflict, not only as soldiers but as cooks or sex slaves, and the US pointed to Somalia as one of the worst offenders in using child soldiers.)

Too poor to pay its soldiers

One of the main problems has been the failure to consistently pay soldiers their $100 monthly wages.

With almost zero income and no administrative capability, the Somali transitional government cannot pay, keep track of, or feed its troops. Much of the money available has come from the African Union, usually via other international bodies.

Being sure that today’s trainees do not become tomorrow’s terrorists is next to impossible. Loyalty comes down to cash and making sure the troops trained abroad stay together.

“For the transitional government, it will be easier to keep all the trained troops together as long as they can succeed in paying their salaries,” says mission commander Col. Ricardo Gon­zales Elul. “These are the two most important and relevant factors once the training has been completed.”

But boosting the government’s military capability alone cannot resolve the situation in Somalia in the long term, says E.J. Hogendoorn, director of the Horn of Africa project at the International Crisis Group’s office in Nairobi, Kenya.

“Training needs to be conducted with a view that the TFG can then negotiate from a position of strength and cut deals with certain clans,” Mr. Hogendoorn says. “There is no such thing as a military solution to the conflict in Somalia.”