How much authority does Pope Benedict XVI still enjoy?

The Catholic Church can never recover as long as its Holy Shepherd is seen as a black sheep in the ever-darkening sex abuse scandal.

Allegations that Pope Benedict XVI may have had detailed knowledge about instances of sexual abuse in the Catholic Church continue to mount. In 1996, the Congregation for the Doctrine of the Faith, which he then led, decided not to punish the pedophile priest Father Lawrence Murphy. With his authority eroded, why does he even remain in office?

What is left is disappearing almost daily. Each new detail about the role he played in his church’s handling of instances of sexual abuse erodes it further. But a pope doesn’t just resign. He is not the CEO of a company, not the head of a political party — he is the direct spiritual descendant of the Apostle Peter.

It is, in theory, possible according to church law. Canon 332, Paragraph Two, provides for a papal resignation, allowing the pope to step down whenever he wishes and without asking anyone for permission. But in the long history of the Catholic Church, it is extremely uncommon. Pope Celestine V was the most recent church leader to resign — 700 years ago.

And even if numerous abuse victims have long been calling for Benedict to stand down, it is simply not papal to turn one’s back on the papacy. Instead, the Vatican prefers to reject any accusations that have been made as being fully unfounded.

On Thursday, one could observe the reflex once again. In the case of the pedophile priest from the US, Father Lawrence Murphy, Vatican spokesman Federico Lomobardi insisted that before he became pope, Benedict, then known as Joseph Ratzinger, was in no way involved in a cover up. Given that “Father Murphy was elderly and in very poor health,” the Congregation for the Doctrine of the Faith, then led by Ratzinger, elected in 1996 to forego punishing him. Murphy, who had abused some 100 children, was allowed to remain a priest until his death.

It seems doubtful that this explanation will reduce the pressure on the pope. The Church’s motto has long seemed to be “the perpetrators first.” They were taken good care of — the victims, however, were left to their own devices.

You can rename Ratzinger “Benedict,”  In the face of the euphoria over the German pope that spread here after his election to the papacy in 2004, but you can’t take Ratzinger out of the pope. Since then, as pope, he has done more damage to his church than good. He has strained relations with Jews several times, he played with fire in relations between Christians and Muslims with his Regensburg address, he angered the indigenous people during his Latin America trip, he has alienated Protestants and he has shown himself to be conciliatory to Holocaust deniers.

Even loyal Catholics have been stunned by the course of action he has taken. And now, on top of all that — one area where he has been consistent over the decades has been in his negligence in dealing with pedophiles within his own institution.

In Ireland or America, bishops have had trouble stepping down — even in cases in which their cover-up had been uncloaked. And in Germany, not a single bishop has taken the fall for the serious mistakes made by the Catholic Church there.

The reaction up until now has hardly gone further than the kind of crisis management one might see at a medium-sized company: issuing an apology, setting up a round table discussion to deal with the problem, establishing a hotline — and not much more. So how are the perpetrators behind the perpetrators to be found? How are we supposed to eradicate the system of cover-ups, silence and reassigning pedophiles to other diocese in the Church? And who will force the Church to open its files to the public?

The experience of the victims in America and Ireland over the years has been bad. What happened behind the facades of the Church is still far from being an open book. The fact that several bishops in Germany helped to ensure the cartel of silence persisted is alone reason enough for them to resign. The alternative would be for them go public with their knowledge and actions, as painful and difficult as that might be. 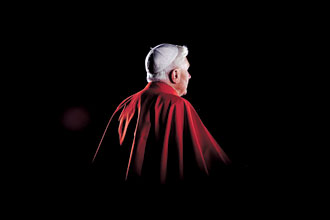 Evil has been perpetrated inside one of the highest moral authorities, one whose men have preached from the pulpit in the finest detail about what is right and what is wrong.

But the question begs asking: What moral authority remains upon which priests and bishops  can draw to continue executing their offices and provide people with answers to life’s difficult questions?