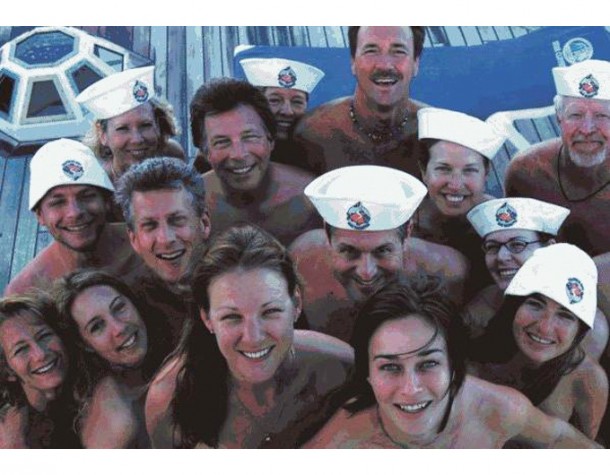 Cruise lovers come in all shapes, sizes and inclinations. Some climb aboard for the pleasure of getting decked out in their sharpest evening wear. Others like to keep it as casual as they can.

Dress codes, indeed, vary from ship to ship. UK-owned Cunard Cruises may still require tuxedos and evening gowns on its ocean liners, but most four and five-star ships now accept jackets and trousers for men, while women no longer have to wear long dresses at the gala dinners.

On some lower-priced though, vacationers will show up for dinner in shorts and tennis socks.

And then…if that dress code is not casual enough, you can book a cruise through Texas-based Bare Necessities. On their ships, you don’t have to bother with outfits at all. Come as you are – in your birthday suit.

The company hopes to fill the 14-deck, 3,000-passenger Carnival Freedom – renamed “The Big Nude Boat” – for the world’s biggest cruise in February 2013: eight days to and from Fort Lauderdale, Florida, with stopovers in Mexico, Costa Rica and Panama.

The offer is part of a new strategy by cruise lines worldwide to come up with themed events for special-interest clients of all age groups. Popular clichés about cruises as floating retirement homes or only-for-the-rich are officially a thing of the past.

Head-bangers and foodies can cruise too

What organizers are dubbing “the world’s biggest heavy metal cruise — 70000 TONS OF METAL” is another case in point: the Majesty of the Seas will be turned into the “Barge to Hell” for a five-day cruise out of Miami to the Turks and Caicos Islands in 2013.

Another tactic is to draw clients with cooking courses and ever more sophisticated specialty restaurants. Together with the editors of Bon Appétit magazine, Oceania Cruises have put together a Bon Appétit Wine & Food Festival for its two newest liners, Riviera and Marina, on 10-day cruises from Athens to Rome and Athens to Istanbul respectively.

The Swiss cruise line MSC Kreuzfahrten has found another niche. It provides and kosher meals. Another cruise line, Holland America, prides itself on having “the largest vegetarian selection at sea.”

And to counter claims that the giant ships are environmental nightmares, some companies are turning sustainability into a sales pitch. Swiss Aida is positioning its Aidamaras one of the world’s most environmentally friendly ships. According to the company, its heat recovery system uses waste heat to run the air-conditioning system and provide hot water, saving a metric ton of fuel every day.