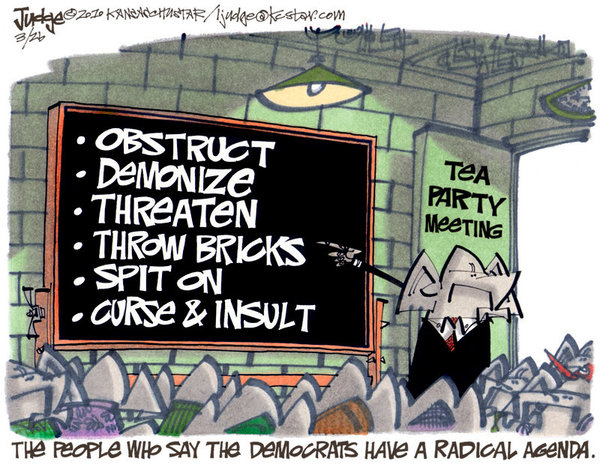 Amusing Bill Maher to Democratic Party: “Your poll numbers may have descended a bit, but so did your testicles.”

Even before the Democrats got to take a single victory lap they were already being warned not to get used to the feeling, and not to get drunk with power. I disagree. All you Democrats: do a shot, and then do another. Get drunk on this feeling of not backing down and doing what you came to Washington to do.

Democrats should not listen to the people who are now saying they shouldn’t attempt anything else big for a while because health care was such a bruising battle. Wrong — because I learned something watching the lying bullies of the Right lose this one: when they’re losing, they squeal like a pig. They kept saying things like, the bill was being “shoved down our throats” or the Democrats were “ramming it through.” The bill was so big they couldn’t take it all at once!

And I realized listening to this rhetoric that it reminded me of something: Tiger Woods’ text messages to his mistress that were made public last week, where he said, and I quote, “I want to treat you rough, throw you around, spank and slap you and make you sore. I want to hold you down and choke you while I fuck that ass that I own. Then I’m going to tell you to shut the fuck up while I slap your face and pull your hair for making noise.” Unquote.

And this, I believe, perfectly represents the attitude Democrats should now have in their dealings with the Republican Party: “Shut the fuck up while I slap your face for making noise — now pass a cap-and-trade law, you stupid bitch, and repeat after me: ‘global warming is real!'”

The Democrats need to push the rest of their agenda while their boot is on the neck of the greedy, poisonous old reptile. Who cares if a cap-and-trade bill isn’t popular, neither was health care. Your poll numbers may have descended a bit, but so did your testicles.

Democrats in America were put on earth to do one thing: drag the ignorant hillbilly half of this country into the next century, which in their case is the 19th — and by passing health care, the Democrats saved their brand. A few months ago, Sarah Palin mockingly asked them, “How’s that hopey-changey thing working out for ya?” Great, actually. Thanks for asking. And how’s that whole Hooked on Phonics thing working out for you?