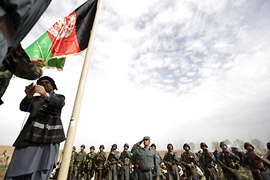 Afghan and international forces have handed over control of the southern Afghanistan town of Marjah to civilian authorities, in the wake of a huge military operation to capture the area from Taliban control.

Officials raised the Afghan flag over Marjah on Thursday, amid tight security, in a brief ceremony to mark the handover.

Following the flag-raising, a local mullah read verses from the Quran.

But just hours earlier, only a few hundred metres away, newly-planted improvised explosive devices were uncovered, including in the main market of Marjah, suggesting Taliban fighters are still active in the area.

Attending the flag-raising ceremony were Mohammad Gulab Mangal, the governor of Helmand province, and Brigadier General Larry Nicholson, who heads the US marines in southern Afghanistan.

Marjah, in Afghanistan’s Helmand province, has been at the centre of a joint offensive between Nato and Afghan troops to secure the region and force out the Taliban.

That mission, known as Operation Moshtarak, was planned as both a military assault and the establishment of Afghan government control in the area.

“The military are very clear to say that one phase doesn’t end and another one begin – they cross over,” James Bays, Al Jazeera’s correspondent, reporting from Marjah, said.

“So the offensive phase of this operation isn’t complete yet, but everyone’s very keen to say it will be an Afghan lead from now on – the Afghan’s deciding what should happen in this town.”

But the government faces an uphill battle to win over locals in Marjah. Many young men in the area admitted to Al Jazeera that they had fought for the Taliban in the past.

“The Afghan flag has been raised here a number of times in the last eight years, but so too has the Taliban flag. It’s the ordinary people they have to win over,” Bays said.

Abdul Zahir, the newly appointed district governor, arrived in the area on Tuesday and has met local elders. 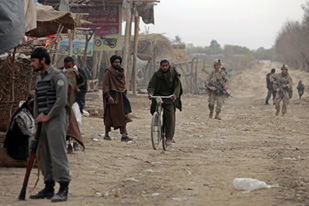 Separately, development workers have rolled out a number of so-called schools-in-a-box and begun repairs to the local irrigation system.

An elite police unit – the Afghan National Civil Order Police – has been sent to the region to provide security in Marjah, but only on a temporary basis.

The unit could also face problems as many of them are from north Afghanistan and speak Dari, rather than the local Pashtun language.

Marjah’s own police force is in training, according to the military.