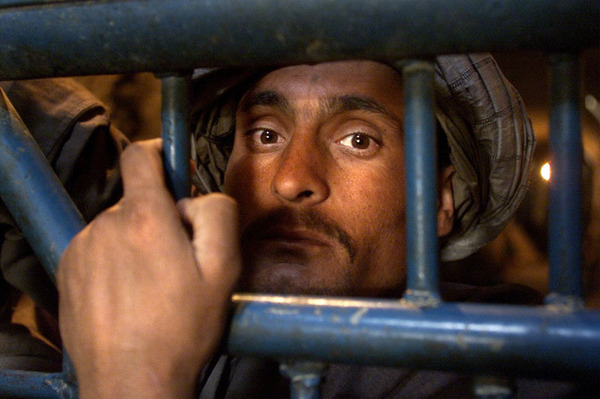 — The bearded Taliban prisoners at Bagram broke off from a spirited game of soccer in the yard to greet a McClatchy reporter, the first journalist allowed into the notorious U.S. jail in Afghanistan since detainees there were moved into a shiny new multimillion-dollar facility.

“Nice to see you guys!” one of the prisoners said with unexpected cheerfulness, in English with an American accent, rushing over and showing off some prayer beads made in the prison workshop. “These should be in retail somewhere.”

The prisoners were running around in bright orange Afghan-style baggy shirts and trousers, a slight variation on the orange jumpsuits made infamous at the Guantanamo Bay prison in Cuba. The detainees, all young men allegedly associated with the Taliban or al Qaida, wore prayer caps and the long, unkempt beards that fundamentalist Muslims favor.

“Colonel Garrity has brought us a lot of good things,” the prisoner volunteered. He spoke through a metal fence and didn’t identify himself, and reporter wasn’t allowed to ask any questions.

Col. John Garrity runs the new Bagram jail, formerly known as the Detention Facility in Parwan, and he aims to bury years of bad press. Garrity, brought in last year from Fort Bragg, N.C., to take over the jail, admitted that not all his charges feel so warmly toward him.

“I know most of them, and I know all of their stories,” Garrity said as he conducted a lengthy tour. “This is COIN” — counterinsurgency — “inside the wire, turning an insurgent into a productive citizen.”

Journalists weren’t allowed to visit the old Bagram prison, in another part of the vast air base 30 miles outside Kabul, where prisoners were kept in cages in a converted aircraft hangar and widespread abuse has been documented, including two homicides in 2002.

While the Obama administration plans to close Guantanamo, Bagram not only has been retained, it’s also been expanded in its new location, leading some critics to dub it “Guantanamo Two.”

Bagram is the test of President Barack Obama’s ambition to improve the treatment of detainees the U.S. military captures in its anti-terrorism fight. The new American approach to the Afghan conflict also rests partly on the conditions for detainees, in order to win over an outraged population that for years has dined on stories of torture and religious abuse.

Jonathan Horowitz, a consultant with the Open Society Institute, an independent group based in the U.S. that promotes democracy, said that there were “very few, if any” indications that the institutionalized physical abuse reported at Bagram from 2003 to 2005 was continuing. However, he said that many detainees at Bagram remained there because of mistaken identity or on the basis of false information provided against them.

Reports of prisoner abuse began to decline in 2006 and now are rare.

Horowitz said two big problems remained: physical abuse at the point of capture and the inability of detainees at Bagram to “meaningfully” challenge the allegations against them, despite procedural reforms that were instituted in September.

The average detainee spends 24 months at Bagram — some spend many years there — and no one sees a lawyer once during that time.

“There has to be a credible and fair process that can get these detainees out of the fog of war, to be able to make an accurate assessment of who should stay in detention and who should get to go home to their families,” said Horowitz, who’s worked extensively with former Bagram detainees.

The new $60 million facility, to which the detainees were transferred in recent weeks, is a spotless modern prison. Human rights groups, who were allowed to visit before the prisoners arrived, say the new building is a vast improvement.

Inside the cells, the guards — 1,200 American military personnel are deployed there — were using the prisoners’ recreation time to search through their few possessions — mattresses, blankets and clothing — for banned items. Their Qurans, provided for each prisoner and stacked in a corner, also would be checked, but by a Muslim employee.

At 10:30 a.m. one recent day, those prisoners who were still in their spartan cells mostly were napping or lying on their mattresses staring into space, while a few were bent over in prayer. Although officials had warned that the prisoners might spit at visitors or even throw feces, there was no hostility.

Each cell was crammed with about 20 prisoners, a rubber mat on the floor marking the spots where each would place a thin mattress. Food is passed into the cells. Piles of Afghan flatbread were stacked outside the cells, waiting for lunchtime. The Bagram authorities boasted that the average prisoner gains 36 pounds during his detention.

In one section of the jail, detainees were speaking by video link to friends or relatives — bearded, turbaned men were on the screens at the other end — an experience they appeared to relish. According to Garrity, better facilities, including space to hold classes and separate “negative detainees,” mean that Bagram can attempt to rehabilitate some detainees.

“If we treat him with dignity and respect, he’s less of a threat to you. He’s not angry at the guard force,” Garrity said. “We change Taliban, one detainee at a time.”

Under a legal revamp last September, a new detention-review procedure means that detainees are present for their hearings and get “personal representatives” or military officers to argue for them and, in theory, to call witnesses. This, however, is technically “internment,” so no charges are ever brought, nor is anyone found guilty or innocent.

The U.S. plans to hand over the new Bagram to the Afghan military next January, a demanding target that some think it will be unable or unwilling to meet. Afghan guards are due to start arriving this spring to be trained. This appears to be the reason, officially at least, for expanding the capacity so dramatically, from 600 prisoners at the old site to 1,000 currently and up to 2,300 when the new building is completed.

“This will be the enduring detention facility for the next 50, 60 years. It’s world class,” said Navy Vice Adm. Robert Harward, who’s in charge of U.S. detention programs in Afghanistan and who was visiting Bagram. “For the Afghans, this means that they will immediately be able to separate the insurgents from the criminal population.”

One obstacle is funding, though. It costs $5 million a year to maintain the new facility, plus an additional cost per detainee, Garrity said. That’s way beyond the budget of the Afghan authorities for a single jail, so it remains unclear how the new prison will be financed.