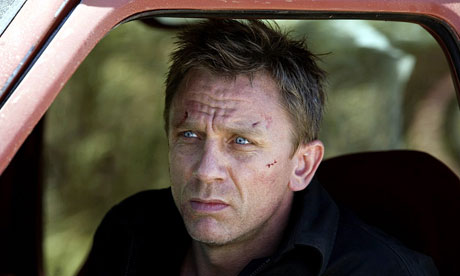 Daniel Craig as James Bond. When Ian Fleming wrote his thrillers, spies lived in an exclusive world. In the US, there’s nearly 1 million.

In the cloak and dagger world of intelligence, the assumption fed by countless spy novels and TV dramas is that top-secret security clearance is restricted to an elite few known only by codes such as M and C. Not so in today’s America.

A new survey of the intelligence network created in the wake of the 9/11 attacks estimates that some 854,000 people have been given high-level clearance, making James Bond look decidedly everyday.

In addition to the army of individuals, it has identified some 1,271 government bodies and 1,931 private contractors working on counter-terrorism.

The creation of this extraordinary spider’s-web of intrigue can be dated back to 16 September 2001, a week after the attacks, when George Bush announced from Camp David the launch of what he called a “war on terror”. The war would take a while, he warned, and the American people would have to be patient, but he was determined.

What he didn’t warn the American people was that nine years later that war would have spawned a gigantic proliferation of agencies and spending unparalleled in US history.

Not only is the system huge and massively expensive, it is also highly inefficient and unwieldy, the Post believes. The official US intelligence budget now stands at $75bn, almost three times its size at 9/11, with 263 new bodies dedicated to rooting out violent extremism.

Much of the work is overlapping. The Post cites the example of 51 federal and military units in 15 cities devoted to tracking the financing of terror networks.

Such is the mountain of paperwork generated, with 50,000 intelligence reports a year, that no one can keep a grip on it. Just a handful of top operatives, known as super users, are allowed to have an overview of all the findings – and not surprisingly they are overwhelmed. “I’m not going to live long enough to be briefed on everything,” one told the Washington Post.

Still, there are aspects of the new underground world that would please 007. The Post located one secret programme to a tall concrete building in Maryland which had false windows to disguise it. Many new buildings created to house operatives have special rooms enclosed in metal to foil snoopers.

Read in depth Blackwater :  The new world of warriors