This is an issue that will define the next several decades and haunt our children and grandchildren for decades more if we don’t pay attention.

Nearly a year ago, we reported that notorious weather modification (geoengineering) proponent, Harvard professor David Keith and his partner would perform an experiment to spray the sky with aluminum oxide and other geoengineering materials in 2018.

It was reported that this would be the first major test for geoengineering, more specifically “SRM” (Solar Radiation Management). From what I can gather this experiment is still going to go ahead, but a specific date has not been announced. Last year, they said the experiment would occur this year, so it might be happening soon.

Keith’s experiment which may happen in 2018 would be officially one of the earliest geoengineering-related experiments to be conducted outside of some controlled computer model or laboratory setting.

Although little has been said about it since its announce nearly a year ago, recently David Keith did an interview to promote Geoengineering. Geoengineering with sulfur was mentioned. Reading from the interview:

“SPIEGEL: Whoever injects sulfur into the stratosphere will put heavy risks on health and environment. This doesn’t frighten you?

Keith: No doubt there are considerable risks. Eventually the sulfur will settle down into the lower atmosphere. And then there’s the ozone loss risk.”

That’s interesting, because remember the rain tests taken in 2016 that proved Northern California rain contained 100x the legal limit of aluminum? Well more rain tests were taken in the region, and this time sulfur was found.

Both Harvard professors, David Keith and Frank Keutsch were planning on launching a high altitude balloon, fixed and tethered to a gondola equipped with sensors and propellers, from a site in Tuscon, Arizona this year.

After a few tests on initial engineering things, this “StratoCruiser” would spray probably nano-particles as geoengineering patents have suggested, of materials such as aluminum oxide, sulfur dioxide, calcium carbonate, or others into the stratosphere.

Then, the sensors would take measurement of the reflectivity of the particles being sprayed, the amount that they coalesce or disperse, and the exact way the interact with the atmosphere’s other content.

According to MIT Technology Review:

“In an earlier interview with MIT Technology Review, Keith stressed that the experiments would not be a binary test of geoengineering itself. But they should provide useful information about the proposed method that he has closely studied, known as solar radiation management.

The basic idea is that spraying certain types of particles into the stratosphere could help reflect more heat back into space. Scientists believe it could work because nature already does it. Large volcanic eruptions in the past have blasted tens of millions of tons of sulfur dioxide into the sky, which contributed to lower global temperatures in subsequent months.”

NASA however, sort of beat them to this type of “experiment.” NASA performed an experiment that really seemed to be about how to mold public perception, when a few months after the Harvard announcement, they sprayed the sky off the coast of Maryland with barium via a sounding rocket, and they colored the toxic metals with bright colors and told the public to watch for the sprayed skies as if it were some type of spectacle to behold, or natural beauty.

“During the eight-minute flight, ten canisters around the size of soft drink cans were thrown out into space from six to 12 miles away from the main payload and altitudes between 96 and 124 miles high. These canisters spewed blue-green and red smokes that formed into artificial clouds that could be seen from Earth.”

“NASA has developed a multi-canister ampoule ejection system that will allow scientists to gather information from the colorful clouds over a much larger area than previously possible, when the tracers were just deployed from the main payload. The vapor itself is formed through the interaction of barium, strontium and cupric-oxide.”

Barium and strontium: the geoengineer’s mix, along with aluminum.

Back to the first experiment that should happen this year, if you live in Tuscon, Arizona you might want to be careful going outside during this experiment. Or should you?

Because a mountain of evidence suggests that militaries and institutions around the planet already spray the stratosphere all the time with high altitude jets, making trails that expand without end and form a haze in the sky, followed by rain tests that display 100 times the legal limit of aluminum.

We in fact do know the exact institutions involved with the creation of the field of geoengineering, and the “defense” contractors involved with what appears to be continuing it today.

Corporations such as Raytheon have been cited as holding “HAARP patents” for certain types of energy that would be beamed into the stratosphere or ionosphere to interact with the sprayed metallic particles and affect weather systems.

Who works with defense contractors and the military on top secret, extremely far reaching projects? The CIA tends to of course, and perhaps that is why their director John Brennan mentioned in 2016 that the world should accept “SRM” and have the skies sprayed to combat global warming.

He wants a paradigm of open, accepted geoengineering and “solar radiation management.” He did mention in the same Council on Foreign Relations speech that some countries may be in opposition to the plan to spray the skies because they might be affected.

Perhaps he was referring to Iran. After all, in 2011 Iran’s president Mahmoud Ahmadinejad openly accused the US and its allies of using weather warfare technology over the Mediterranean to affect the rain current and cause drought in Iran.

Well, Iran is still in a drought: and I’m willing to bet the “technology” used over the Mediterranean that he was referring to is sprayed aerosols over a US allied country, used in conjunction with the HAARP-type facilities that work with the sprayed aerosols.

Perhaps that can also explain why monsoon rain and flooding has occurred inrecent years in India, and places where that rain current goes after it skips Iran. Iran gets a drought, the next countries to receive the rain get flooding. That seems to be the paradigm that high level people pushing geoengineering want.

So really, the work of David Keith is nothing more than publicity, a real facade to make it seem as if the world’s most powerful entities aren’t already spraying nearly every day in places all over the world.

Little bite sized chunks of publicity, normalizing this concept in the minds of most people, this is their way of opening the door to a very scary future where questioning the safety or ethics of geoengineering is akin to questioning something we rely upon for life.

Even worse, just imagine what would happen if the government had the public’s consent to openly spray the skies every day, to haze out the sun and perform “solar radiation management” to stop climate change. Do people even know what kind of power differential that would create between these players and the common people? The entire mainstream media is pushing for geoengineering, promoting it right now: look it up. They are blatantly promoting geoengineering because big money wants them to say that.

But can we fix the earth this way? And even if we can … should we? http://wamu.fm/2pnKku2

Is Geoengineering A Solution To Climate Change? – 1A

We got ourselves into this, and some researchers have a plan for getting ourselves out. 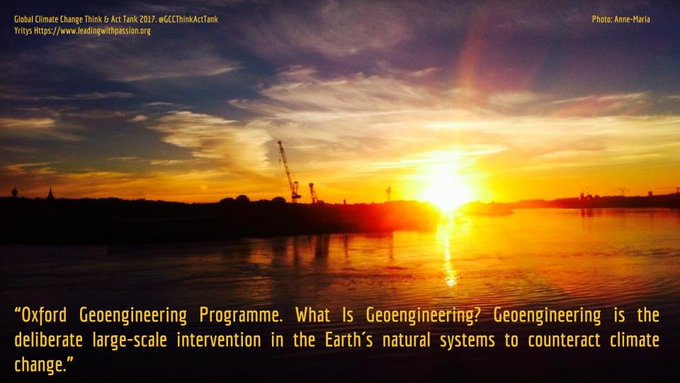 Governments, especially the US, have a long history of experimenting on their own citizens if they ever get the opportunity. Things have been sprayed on cities, bacteria has been sprayed on San Francisco, poor southern Blacks have been infected with Syphilis in experiments that lasted decades and decades. What do people think will happen if every day, something is sprayed out of airplanes on us openly and we have to trust it’s just aluminum and barium?

Remember: when you go outside and smell that powdery, static electricity type smell in the air and it follows spraying in the sky that can be clearly observed, a lot of evidence suggests you might be smelling aluminum that has been sprayed. If you ever smell aluminum in the air, or on your clothes after you come inside, think about what that might be.

The man who brought the rain samples to a lab, Patrick Roddie, gave a lot of important info in this interview that was viewed over 300,000 times. The content of this interview was even translated into Spanish and reported byRussia Today.

This is an issue that will define the next several decades and haunt our children and grandchildren for decades more if we don’t pay attention. Please share this with as many people as possible.