BLOWBACK AND BACKLASH IN PROGRESS 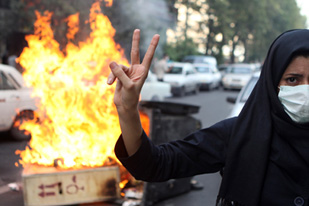 Protesters sentenced to die were arrested in connection with the unrest that erupted in the wake of the disputed presidential vote in June last year.

Allegations that the election, resulting in the re-election of Mahmoud Ahmadinejad, was rigged sparked widespread street protests and pitched Iran into one of the worst crises in the country’s history.

The executed men were identified as Arash Rahmanipour and Mohammad Reza Ali-Zamani.

Both were reported by Iranian media as belonging to the monarchist group Tondar, also known as the Kingdom Assembly of Iran.

The executions drew international condemnation and were branded by opposition leaders as an effort to scare protesters and keep them off the streets.