Thomas Singer, MD at the C G Jung Institute of Chicago, who while correctly stating that “things were falling apart” before President Trump was even elected, gives his diagnosis about America saying: “Our inner experience, as individuals or groups, on the left or the right, is that there’s something very damaged about everything that makes us American…We’re shattered”—further states that: “The soul of the nation gets forged in that collision of ideas, about race, about money and capitalism, about the individual versus the collective”—and most critically, sees Dr. Singer now wondering whether President Trump may have forced the country to confront and maybe resolve some of its deepest problems as this new age rushes in. 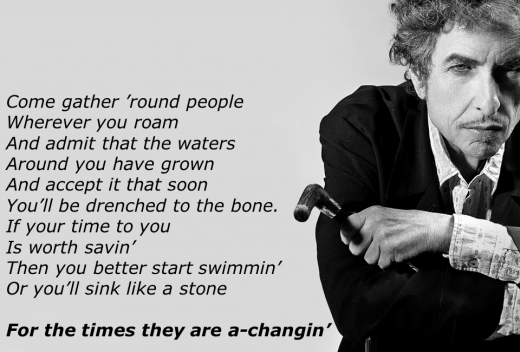 In this “collision of ideas” that is “forging the soul” for the new nation America will become in the Information Age, this report continues, President Trump has firmly sided with the middle and lower class workers whose labor skills are needed to build the infrastructure of the 21st Century—a task well suited for a businessman that built his multi-billion global fortune skillfully managing the workers that built his skyscrapers, while at the same time he battled against elite university educated politicians, journalists and bankers trying to bring him down—battles that causes President Trump to disdain these elites to this very day, and is why he views them like soon to be extinct dinosaurs, which is the same way peasants turning into industrial workers viewed the elite monarchs ruling over them during the Industrial Revolution—peasants that are now middle and lower class workers being viewed with contempt by their elite socialist rulers behaving like monarchs—all of whom should start remembering what the French Revolution was about, as it proved that angered peasants are always more powerful than monarchs—a lesson also learned by King George III during the American Revolution. 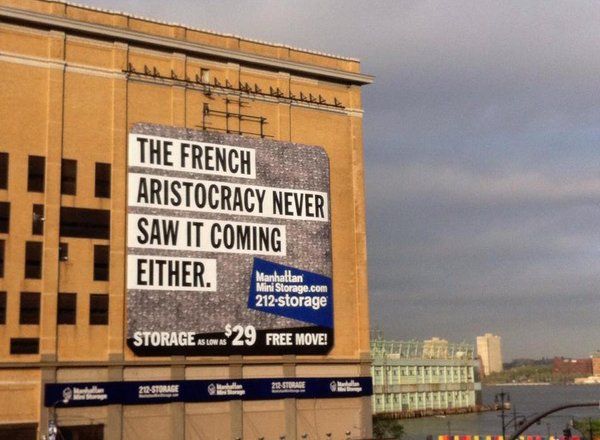 Middle and lower class moving workers in New York City charitably give a warning (above) to their elite socialist Democrat Party overlords of what is to come.

In a last-gasp bid to hold onto power, this report details, socialist Democrat Party forces along with their allied elite leftists in the media have terrorized the American people with coronavirus pandemic hysteria to such an extent it’s now being said: “We have now fallen deep into a Covidian Cult, a totalitarian psychotic narrative that has little connection to reality or to the facts”—the same totalitarian psychotic narrative now being used by the leftist media to deliberately ignore US intelligence agencies and keep falsely labeling Biden Bombshells as “Russian Misinformation”—which leaves the American people unable to know even the simplest of true facts, such as the FBI seized Hunter Biden’s laptop under a D-File “Unknown SUA”, which means “Unknown Specified Unlawful Activity”, that shows the FBI had no information at the time about what underlying criminal activity might be involved—a suppression of truth now joined by leftist social media giant Facebook preparing measures to keep the American people from knowing who wins their 3 November election—suppression of truth measures the Wall Street Journal is now warning about in their just published article “How Free Speech Dies” that notes “Hyper-intolerance is a familiar path to tyranny throughout Latin America”—wherein it shockingly documents in chilling detail how socialist forces gained the favor of media organizations, then destroyed their nation’s, after which they killed and imprisoned all of the journalists who supported them—though to best explain to the American people what is being done to them, the Christian satirical site Babylon Bee has just published the helpful “Dummies Guide To Our Stupid News Cycle”. 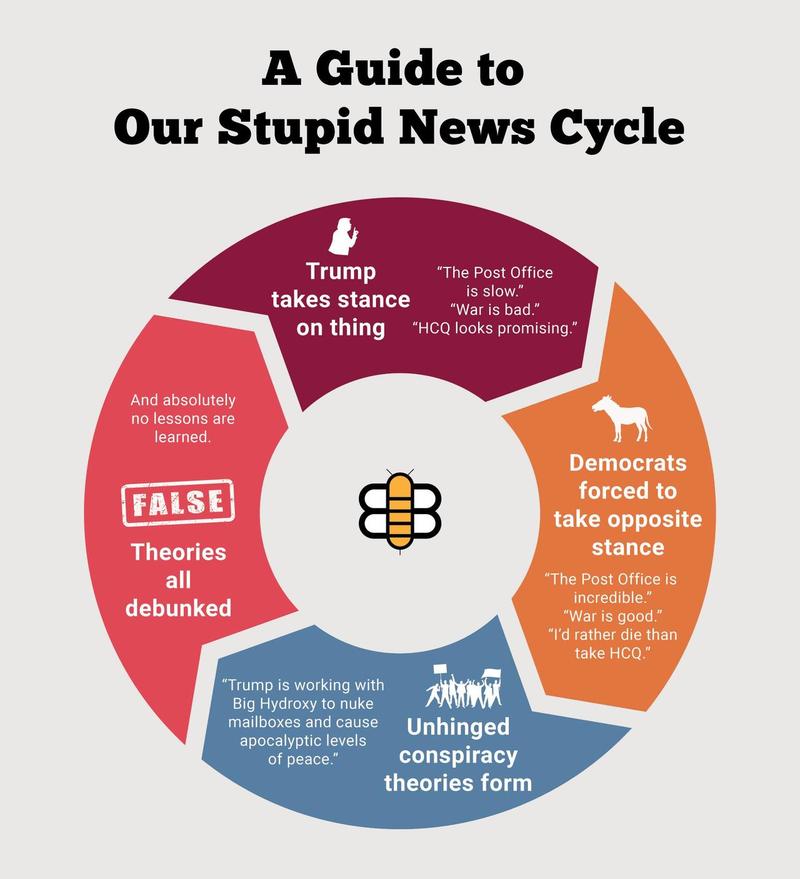 As to how truly stupid the news has become in America, this report examples, the leftist Washington Post on Saturday published their article “Biden, Trump Sharpen Messages With Campaign Stops In Battleground States”—an article that if President Trump was omitted from would have seen this articles headline being “Biden Makes Two Campaign Stops In Pennsylvania 10-Miles From His Delaware Basement Bunker”—the first of which saw Pennsylvania supporters for Trump showing up, whom Biden contemptuously called “chumps”—and at the second saw Biden exploding everyone’s mind when he said “We have put together, I think, the most extensive and inclusive voter fraud organization in the history of American politics”—campaign stops that saw only 130 cars showing up to hear Biden speak, and when Obama did a campaign stop for Biden in Florida, just a mere 228 cars with 400 people bothered to hear him—that was then joined with the release of Hunter Biden’s sex tapes, that caused a spike in Google searches for the question “Can I Change My Vote”—all of which occurred in a 24-hour period that ended yesterday when Biden announced that he wouldn’t be making any more campaign appearances before the 3 November election. 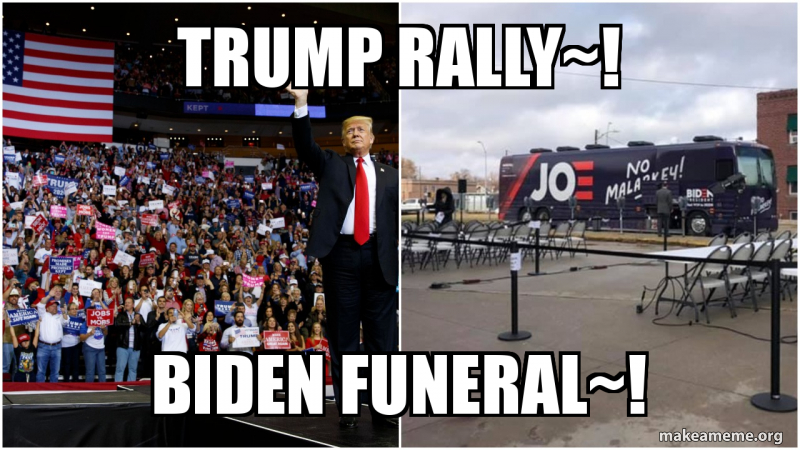 As opposed to socialist Democrat Party leader Joe Biden, this report concludes, President Trump is campaigning in multiple States everyday drawing massive crowds of tens-of-thousands of cheering supports all shouting “We Love You!” at him—one of the most remarkable of occurred a few hours ago, when President Trump made a last minute unscheduled stop at a farmers market in Levant-Maine and thousands showed up to cheer him—and even without his being there, yesterday in socialist Democrat Party controlled States saw hundreds of suburban women in Connecticut coming out to support Trump with them declaring they will be “Silent No More!”—saw over 1,000 people rallying for Trump in New Jersey—saw thousands gathering to cheer and support Trump in Beverly Hills-California—saw over 2,000 vehicles holding a massive Trump parade in Los Angeles beach towns—and beyond belief, saw Jewish peoples by the thousands having a miles long parade of vehicles supporting Trump that drove right into the heart of New York City, where of course they came under socialist terror attacks—all occurring at the same time socialist Democrat watch in terror as polls show Trump leading in critical to win battleground States—that explains why financial analysts are noticing the odds of a “Blue Wave” tumbling, and why leftist social media giant Twitter banned the account of the analytical financial firm Creditblock, who after analyzing the true data of this election, sent out the Tweet that got them banned which said “#Biden Harris 2020 Landslide more like a mudslide”—a banning not justified by the new voter registrations for Trump proving he’s vastly outdone the socialist Democrats—all of which the socialist Democrats and leftist lying media are desperately trying to counter with more “everyone is going to die” coronavirus hysteria—that President Trump’s chief of staff Mark Meadows immediately countered by saying “We will treat Covid-19 like every other respiratory virus”—and if that wasn’t enough to explode the heads of these demons, Donald Trump Jr. posting an image of himself yesterday standing next to the sign reading “Don Jr. 2024” most certainly did. 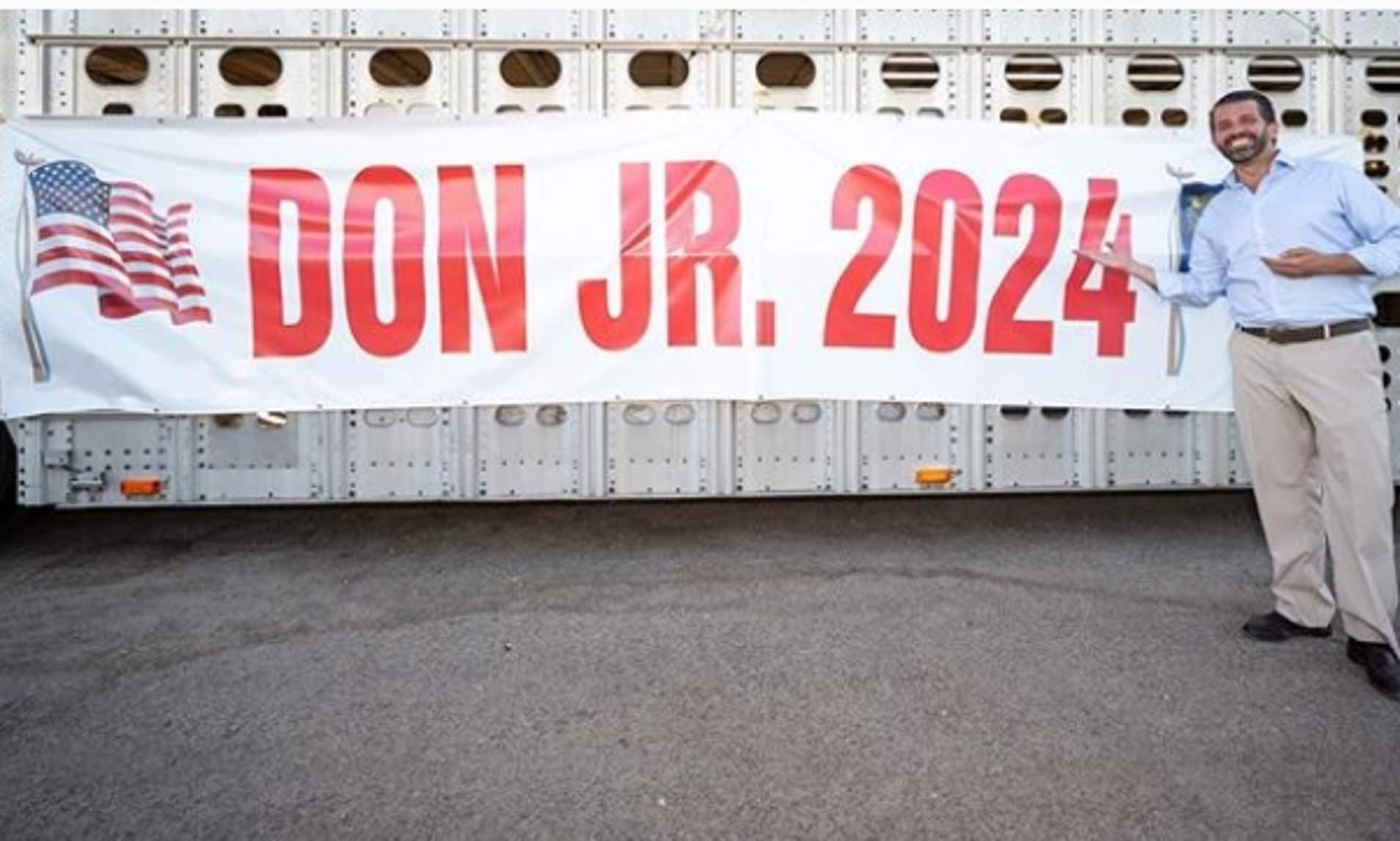 October 26, 2020 © EU and US all rights reserved. Permission to use this report in its entirety is granted under the condition it is linked to its original source at WhatDoesItMean.Com.