How to deal with a strong China? 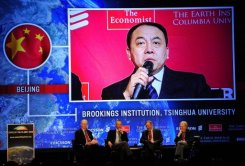 AUSTRALIA has three big advantages in dealing with an ever more powerful China. The trick for the next government, and its successors, will be to use the leverage these natural and induced advantages provide, while avoiding a significant pitfall Australia may be creating for itself.

The country’s most obvious advantage is the structure of its economic relationship with China. The US trade and financial-flow imbalance with China might not be as one-sidedly disastrous for the US as it initially appears, but making that argument requires some leaps of faith and many complicated comparisons of benefits and losses.

A second advantage might seem associated with Kevin Rudd’s rise but actually long predates him – and should outlast him too. For as long as modern China (and Japan) have been important to the Western world, Australian scholars, journalists, diplomats and businesspeople have been disproportionately influential in interpreting Asian developments. Hundreds of Australians have significantly shaped the outside world’s understanding of China. Presumably Australia’s location, its tradition of exposure to Asian cultures and resulting expertise, and its freedom from the superpower neuroses that complicate US dealings with China (among other countries), should provide an enduring edge in sophistication.

The third advantage is one that Rudd deserves direct credit for. It was not his famed emphasis on language study but one of the Chinese words he used in his big speech in Beijing soon after taking office. It would have been natural for this to be purely a feel-good celebratory event welcoming a pengyou, a known “friend of China”. But the news from the visit, inside China, where I was living, and worldwide, was Rudd’s fairly gutsy emphasis on his intention that Australia be China’s zhengyou, a “true friend” who would be loyal enough to raise unpleasant truths. That was a pithier formulation of the policy the US has been trying to express for 30 years: we should work with China wherever possible, and criticise it wherever necessary. It positions Australia well for a relationship of respect but not servility towards China.

So the next government will inherit a trade situation with China that is strong and not necessarily fated to weaken and the right attitude of friendly independence towards the mixed goods and bads of China’s modern achievement. What could go wrong?

Strange as it may sound, the most worrisome could be signs that the Australian public, and parts of the elite, are losing their minds about China. Or, to put it more politely, they are having trouble keeping China’s strengths and weaknesses in perspective and therefore may misjudge the choices available to Australia.

The leading indicator is the Lowy Institute poll of national opinion, which two months ago found 55 per cent of Australians believed China was now the world’s leading economic power, and 46 per cent believed China’s growth posed a threat. The same poll found three-quarters thought China’s rise had been good for Australia’s economy.

China is indisputably the world’s fastest-growing major economy, and already the leader in certain fields – most recently, total energy consumption, with a population four times greater than the US but an economy less than half as large. To watch the almost overnight construction of subway lines, airports, and major trunk roads suggests the Chinese system is omni-competent. But that many Australians think China is already dominant suggests a basic unfamiliarity with China’s realities and their effect on the rest of the world.

For instance, the environmental situation in China is truly disastrous. China’s central government itself says so, and officials realise that this is the next emergency for them to address. China still has twice as many peasants as Japan has people, and its per capita economic output is barely one tenth of Japan’s. Economic planners across China understand that if it is to rise above the three pillars of its recent growth – construction projects and low-wage manufacturing – it will need to foster the elements of a “knowledge economy”, from strong universities to enforceable contracts, patents and copyrights.

One indicator of the challenge: Jiao Tong University, in Shanghai, produces rankings of the top universities in the world, based on research output. Western universities, mainly US and British, dominate the rankings; but Japan usually has a half dozen in the top 100, and Australia consistently has three, Sydney, Melbourne and the ANU. No Chinese university has ever been in the top 200. Another indicator: start counting how many Chinese corporate brand names you can think of, and see how many fingers you have left over when you stop.

The US and European economies have serious problems, but together they account for somewhere between three and five times more economic activity than China. Any sensible person has to recognise China’s dynamism and bet on its continued success. But any rational person has to recognise its modest starting point and the obstacles still ahead. And as for the realms of influence beyond the economic, it is striking how far the Chinese system still has to go in developing either its “soft” or “hard” power. What was the last big struggle for world opinion the Chinese government won?

The Chinese military is growing but the gap it has to close is immense. Its most recent major combat experience was a bloody defeat by the Vietnamese 30 years ago.

What is the danger of Australians confusing China’s dynamism with its achievement of dominance? Having spent much of my journalistic life arguing Westerners should take China far more seriously than they do, and prepare to feel comfortable in a world in which China plays a big (though not yet dominant) part, I believe the next Australian government should deepen rather than reduce the country’s range of interactions with China.

But the risk of premature fear of an all-powerful Chinese giant is that Australia may underestimate its own strengths and advantages; feel threatened when, like the US and Europe, it needs instead mainly to feel challenged; and over-react diplomatically, culturally, and militarily in a way that makes it harder to achieve the goals that should be within its reach. It would also jeopardise its potential middleman role, connecting China and other Asian powers with Australia’s Western allies. Rudd may have oversold the power that came with this role, but it represents potential that Australia should not throw away.

Usually an election is a welcome opportunity for a new start and a change of course. When it comes to China, I hope the next government adjusts in detail, but mainly Australia should recognise that it is on the right path. Many other countries wish they could say as much.

James Fallows is Chair in US Media at the US Studies Centre, national correspondent for The Atlantic, and author of Postcards from Tomorrow Square.