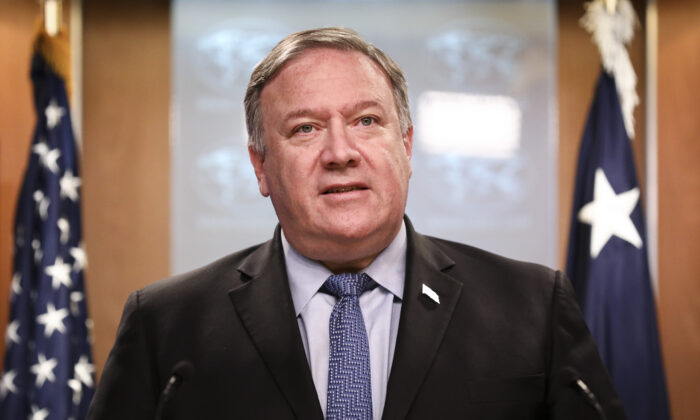 Secretary of State Mike Pompeo speaks at the Department of State in Washington on June 21, 2019. (Samira Bouaou/The Epoch Times)
US NEWS

Secretary of State Mike Pompeo ripped the Washington Post over its obituary for Abu Bakr al-Baghdadi, the ISIS terrorist leader who died during a U.S. military raid over the weekend.

The paper printed an obituary for al-Baghdadi that initially called him “terrorist-in-chief” in its headline. However, the headline was changed to call him an “austere religious scholar” instead.

After a backlash, the paper updated the headline again to call him “extremist leader of Islamic State,” but the flattering description of the terrorist still remains inside the article, along with a number of lines about his past before becoming the head of ISIS.

“I think it’s appalling and sick … that they’ve frankly not apologized for taking this man who was the head of the terrorist organization that beheaded people… who led a caliphate that threatened large pieces of the Middle East and, indeed, presented risks to the United States and America,” Pompeo said during an Oct. 28 appearance on “Fox & Friends.”

“The fact that a national newspaper would describe this person as an ‘austere scholar’ in their headline—in the immediate aftermath of the achievements of President Trump and the administration—is truly appalling,” Pompeo continued.

Media critics, lawmakers, and others coalesced around the issue on Sunday, building up a force that seemed to prompt the outlet to change the headline. Ivanka Trump, another administration official, wrote: “Unreal. al-Baghdadi described as ‘Austere religious scholar’ instead of ‘terrorist’ in Washpo Obituary headline.”

“Regarding our al-Baghdadi obituary, the headline should never have read that way and we changed it quickly,” wrote Kristine Coratti Kelly, vice president of Washington Post Live, in a statement.

Kris Coratti, a spokeswoman for the outlet, later told CNN: “Post correspondents have spent years in Iraq and Syria documenting ISIS savagery, often at great personal risk. Unfortunately, a headline written in haste to portray the origins of al-Baghdadi and ISIS didn’t communicate that brutality.”

“The headline was promptly changed,” she added.

The obituary still includes the line: “When Abu Bakr al-Baghdadi took the reins of the Islamic State of Iraq in 2010, few had heard of the organization or its new leader, then an austere religious scholar with wire-frame glasses and no known aptitude for fighting and killing.”