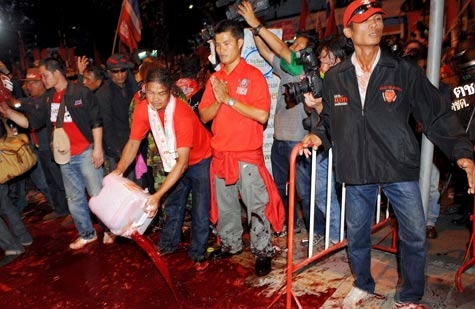 Although strongly symbolic, some people may view pouring of human blood as a self indulgent act that has little chance of forcing political change.

Despite remaining professionally impartial in the ongoing political dispute in Thailand, I can’t help but think the anti-government protestors made a mistake with their latest stunt in Bangkok.

The so-called Red Shirts spent the day taking blood from their supporters, and then poured it around the entrances to Government House.

They were attempting to put further pressure on Abhisit Vejjajiva, the prime minister, to dissolve parliament and call an election.

The reds marched from their base to Government House, and when the leaders arrived in two trucks they tried to force their way through the crowd to the blockade which had been set up by the security forces.

In doing so, they could have seriously hurt some of us caught between their trucks and the fence blocking the protestors from going any further.

People were crushed up against the fence with nowhere to go. The Red Shirts are lucky no one was hurt.

But it was the sight of the leaders of the organization pouring the human blood that could turn a lot of people away from supporting their cause.

I understand the symbolism they were trying to create, but some people may see it as a self indulgent act that had little chance of forcing political change.

It will create headlines around the world. But not necessarily headlines the Red Shirts need.