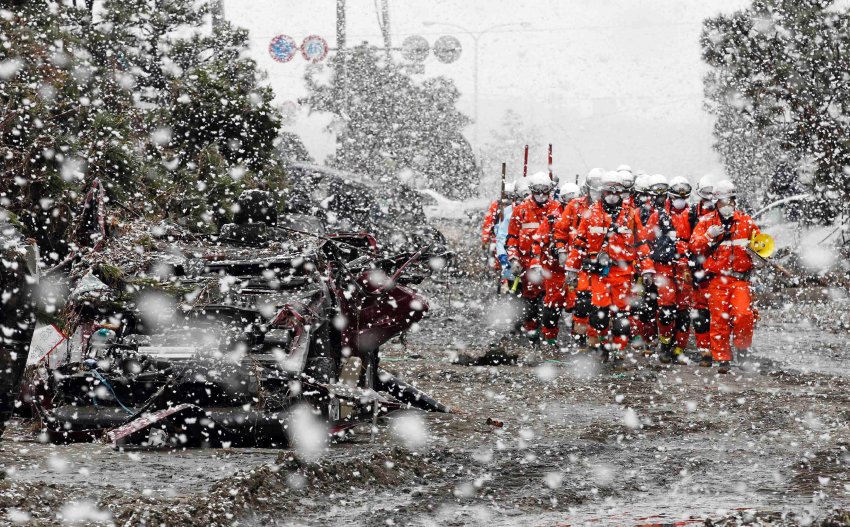 Explosions and a fire at Japan’s quake-hit nuclear plant unleashed dangerous levels of radiation Today, sparking a collapse on the stock market and panic-buying in supermarkets.

Tokyo stocks, punished in a frantic sell-off that sent indexes around the world sliding, plummeted another 14 per cent before paring some losses and ending 10.55 per cent down. European and US stocks also fell sharply.

In towns and cities, fearful citizens stripped shelves of food and water, prompting the government to warn that panic-buying could hurt its ability to provide aid to areas devastated by Friday’s massive quake and tsunami.

But scared Tokyo residents filled outbound trains and rushed to shops to stock up on face masks and emergency supplies amid heightening fears of radiation headed their way. 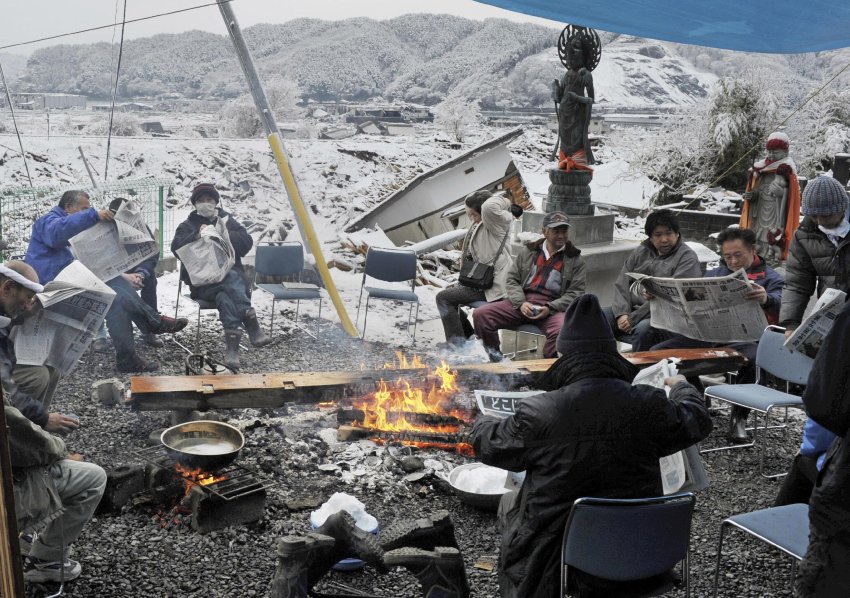 Radiation levels around the Fukushima No.1 plant on the eastern coast had “risen considerably”, Prime Minister Naoto Kan said, and his chief spokesperson announced it had reached the point where it endangered human health.

In Tokyo, 250 kilometres to the southwest, authorities also said that higher-than-normal radiation levels had been detected in the capital, the world’s biggest urban area, but not at harmful levels.

Kan warned people living up to 10 kilometres beyond a 20 kilometre exclusion zone around the nuclear plant to stay indoors.

“I would like to ask the nation, although this incident is of great concern, I ask you to react very calmly,” he said.

The fire, which was put out with the help of US troops, broke out in the plant’s No. 4 reactor, meaning that four of the facility’s six reactors were in trouble – and temperatures were reportedly rising in the other two.

The UN weather agency said that winds were currently blowing radioactive material towards the ocean, and that there were “no implications” for Japan or countries nearby. 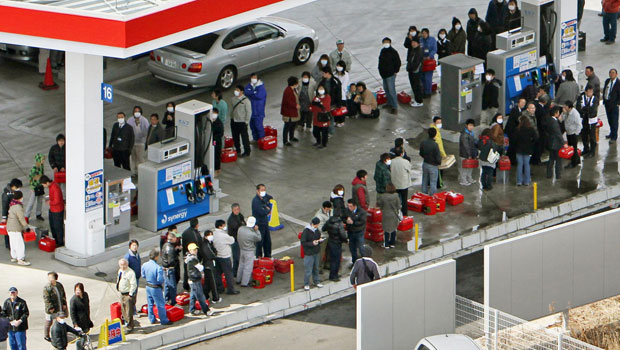 France’s Nuclear Safety Authority said the disaster now equated to a six on the seven-point international scale for nuclear accidents, ranking the crisis second only in gravity to Chernobyl.

“There is talk of an apocalypse and I think the word is particularly well chosen,” he said in remarks to the European Parliament.


Japan, however, maintained its assessment of the disaster at a four, placing it behind the Three Mile Island accident in the United States in 1979.

The disaster prompted France, Russia and Germany to order immediate reviews of their atomic energy sectors, with Berlin saying it would provisionally shut down seven nuclear reactors for three months pending a safety assessment.

On top of the atomic emergency, Japan is struggling to cope with the enormity of the damage from the record quake and the tsunami that raced across vast tracts of its northeast, destroying everything in its path.

The official death toll rose to 3,373 confirmed dead, police said, with the number of those unaccounted for at 6,746. Officials have said at least 10,000 were likely to have perished.

In the only country in the world to have experienced a nuclear attack – two bombs dropped by the United States during World War II killed some 200,000 people – Japanese citizens are gripped by dread of nuclear catastrophe.

Emergency relief goods have not reached evacuation centres in the city.

More than 200,000 people have already been evacuated from the exclusion zone around the crippled plant.

The crisis at the ageing Fukushima nuclear plant has worsened daily since Friday’s quake and tsunami knocked out cooling systems. 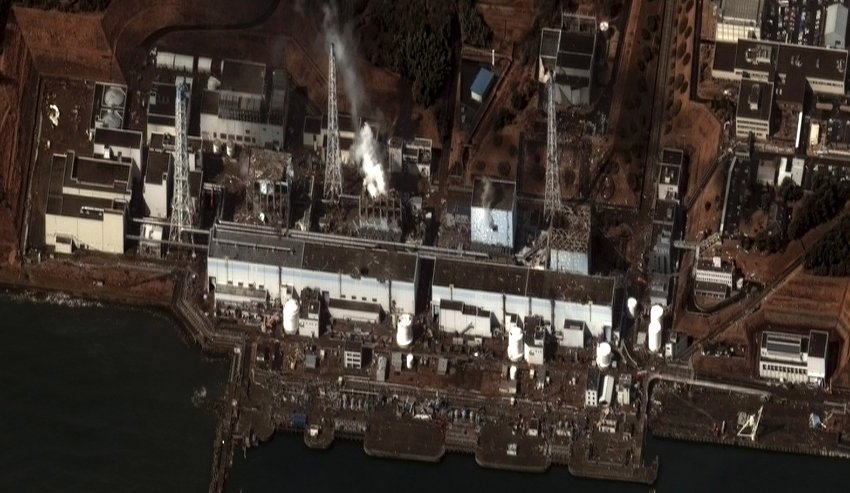 Explosions hit the buildings housing reactors one and three Saturday and Monday. On Tuesday, a blast hit reactor two at the plant and there was also an explosion at reactor four which started a fire.

The UN’s nuclear watchdog, the International Atomic Energy Agency (IAEA), said Tokyo had asked for expert assistance in the aftermath of the quake, which US seismologists are now measuring at 9.0-magnitude, revised up from 8.9.

The IAEA’s Japanese chief Yukiya Amano moved to calm global fears that the situation could escalate to rival the world’s worst nuclear accident at Chernobyl in Ukraine in 1986.

“Let me say that the possibility that the development of this accident into one like Chernobyl is very unlikely,” he said.

But he later told a news conference at the watchdog’s Vienna headquarters that there might be limited core damage at the No. 2 unit of the Fukushima nuclear power plant.

Nevertheless, the damage “is estimated to be less than 5 per cent of the fuel,” he said.

Earlier, the IAEA also said that the primary containment vessel of the reactor “may have been affected” by an explosion there and that a storage pond of spent fuel had caught fire but has since been extinguished.

“These are very worrying events,” Amano said, but he ruled out the possibility of a reactor meltdown at the current juncture.

Amano said he remained convinced that the situation at Fukushima was different from that of the 1986 Chernobyl disaster, the world’s worst.

The devastation in tsunami-hit areas such as Sendai city in the northeast, however, is absolute.

At the once-bustling regional airport small planes jutted out at awkward angles from thick mud, amid the wreckage of clusters of wooden beachfront houses that were splintered into flotsam in an instant by the waves.

The machinery of modern life has been crumpled almost beyond recognition as far as the eye can see – cars are stuck incongruously into the few remaining structures or balanced on top of wrecked homes.

Aid workers and search teams from across the world have joined 100,000 Japanese soldiers in a massive relief push in the shattered areas.

Rescuers pulled two survivors, an elderly woman and a man, from underneath the rubble, four days after the earthquake, public broadcaster NHK reported. 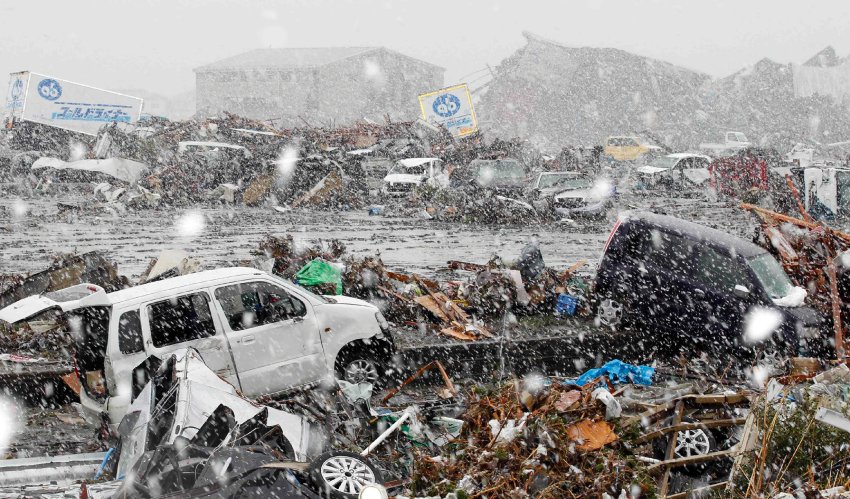 Millions have been left without water, electricity, fuel or enough food and hundreds of thousands more are homeless and facing harsh conditions with freezing temperatures overnight, and snow and rain forecast.

And with nerves still jangling, aftershocks continued to hit the country, while a strong and shallow earthquake of 6.0-magnitude rattled Tokyo late Tuesday – the epicentre was not the same place as Friday’s massive quake.

The government expects a “considerable” economic impact from the disaster, which has plunged the nation into what Prime Minister Kan called its worst crisis since World War II.

Singapore’s DBS Bank estimated that the twin disasters would cost Japan’s economy about $100 billion, or about two percentage points of its annual gross domestic product.