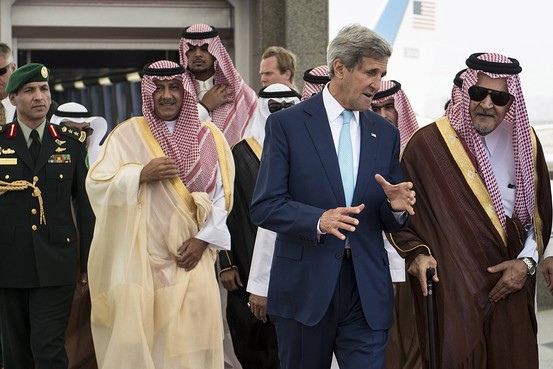 For those to whom the recent US campaign against Syria seems a deja vu of last summer’s “near-war” attempt to ouster its president Bashar al-Assad, which was stopped in the last minute due to some very forceful Russian intervention and the near breakout of war in the Mediterranean between US and Russian navies, it is because they are. And as a reminder, just like last year, the biggest wildcard in this, and that, direct intervention into sovereign Syrian territory, or as some would call it invasion or even war, was not the US but Saudi Arabia – recall from August of 2013 – “Meet Saudi Arabia’s Bandar bin Sultan: The Puppetmaster Behind The Syrian War.” Bin Sultan was officially let go shortly after the 2013 campaign to replace Syria’s leadership with a more “amenable” regime failed if not unofficially (see below), but Saudi ambitions over Syria remained.

That much is revealed by the WSJ today in a piece exposing the backdoor dealings that the US conducted with Saudi Arabia to get the “green light” to launch its airstrikes against ISIS, or rather, parts of Iraq and Syria. And, not surprising, it is once again Assad whose fate was the bargaining chip to get the Saudis on the US’ side, because in order to launch the incursion into Syrian sovereign territory “took months of behind-the-scenes work by the U.S. and Arab leaders, who agreed on the need to cooperate against Islamic State, but not how or when. The process gave the Saudis leverage to extract a fresh U.S. commitment to beef up training for rebels fighting Mr. Assad, whose demise the Saudis still see as a top priority.”

In other words, John Kerry came, saw and promised everything he could, up to and including the missing piece of the puzzle – Syria itself on a silver platter – in order to prevent another diplomatic humiliation.

When Mr. Kerry touched down in Jeddah to meet with King Abdullah on Sept. 11, he didn’t know for sure what else the Saudis were prepared to do. The Saudis had informed their American counterparts before the visit that they would be ready to commit air power—but only if they were convinced the Americans were serious about a sustained effort in Syria. The Saudis, for their part, weren’t sure how far Mr. Obama would be willing to go, according to diplomats.

Said otherwise, the pound of flesh demanded by Saudi Arabia to “bless” US airstrikes and make them appear as an act of some coalition, is the removal of the Assad regime. Why? So that, as we also explained last year, the holdings of the great Qatar natural gas fields can finally make their way onward to Europe, which incidentally is also America’s desire – what better way to punish Putin for his recent actions than by crushing the main leverage the Kremlin has over Europe?

But back to the Saudis and how the deal to bomb Syria was cobbled together:

The Americans knew a lot was riding on a Sept. 11 meeting with the king of Saudi Arabia at his summer palace on the Red Sea.

A year earlier, King Abdullah had fumed when President Barack Obama called off strikes against the regime of Syria’s Bashar al-Assad. This time, the U.S. needed the king’s commitment to support a different Syrian mission—against the extremist group Islamic State—knowing there was little hope of assembling an Arab front without it.

At the palace, Secretary of State John Kerry requested assistance up to and including air strikes, according to U.S. and Gulf officials. “We will provide any support you need,” the king said.
But only after the Saudis got the above mentioned assurances that Assad will fall. And to do that they would have to strongarm Obama:

Wary of a repeat of Mr. Obama’s earlier reversal, the Saudis and United Arab Emirates decided on a strategy aimed at making it harder for Mr. Obama to change course. “Whatever they ask for, you say ‘yes,'” an adviser to the Gulf bloc said of its strategy. “The goal was not to give them any reason to slow down or back out.”

Arab participation in the strikes is of more symbolic than military value. The Americans have taken the lead and have dropped far more bombs than their Arab counterparts. But the show of support from a major Sunni state for a campaign against a Sunni militant group, U.S. officials said, made Mr. Obama comfortable with authorizing a campaign he had previously resisted.
To be sure, so far Obama has refrained from directly bombing Assad, it is only a matter of time: “How the alliance fares will depend on how the two sides reconcile their fundamental differences over Syria and other issues. Saudi leaders and members of the moderate Syrian opposition are betting the U.S. could eventually be pulled in the direction of strikes supporting moderate rebel fighters against Mr. Assad in addition to Islamic State. U.S. officials say the administration has no intention of bombing Mr. Assad’s forces”… for now.

But why is Saudi Arabia so adamant to remove Assad? Here is the WSJ’s take:

For the Saudis, Syria had become a critical frontline in the battle for regional influence with Iran, an Assad ally. As Mr. Assad stepped up his domestic crackdown, the king decided to do whatever was needed to bring the Syrian leader down, Arab diplomats say.
In the last week of August, a U.S. military and State Department delegation flew to Riyadh to lay the ground for a military program to train the moderate Syrian opposition to fight both the Assad regime and Islamic State—something the Saudis have long requested. The U.S. team wanted permission to use Saudi facilities for the training. Top Saudi ministers, after consulting overnight with the king, agreed and offered to foot much of the bill. Mr. Jubeir went to Capitol Hill to pressed key lawmakers to approve legislation authorizing the training.
And once the US once again folded to Saudi demands to attack another sovereign, it was merely a matter of planning:

Hours before the military campaign was set to begin, U.S. officials held a conference call to discuss final preparations. On the call, military officers raised last-minute questions about whether Qatar would take part and whether the countries would make their actions public.

Mr. Kerry was staying in a suite on the 34th floor of New York’s Waldorf Astoria hotel, where he was meeting leaders attending United Nations gatherings. He called his Gulf counterparts to make sure they were still onboard. They were.

The UAE, which some defense officials refer to as “Little Sparta” because of its outsized military strength, had the most robust role. One of the UAE’s pilots was a woman. Two of the F-15 pilots were members of the Saudi royal family, including Prince Khaled bin Salman, son of the crown prince. In the third wave of the initial attack, half of the attack airplanes in the sky were from Arab countries.
The best news for Obama: it is now just a matter of time to recreate the same false flag that the Saudi-US alliance pushed so hard on the world in the summer of 2013 to justify the first attempt to remove Assad, and once again get the “sympathy” public cote behind him, naturally with the support of the US media.

But how does one know it is once again nothing but a stage? The following blurb should explain everything:

Saudi players in attendance for the Sept. 11 meeting included Prince Bandar bin Sultan, who as the king’s spymaster last year ran afoul of Mr. Kerry over Syria and Iraq policy. U.S. officials interpreted his presence as a sign the king wanted to make sure the court was united, U.S. officials said.
Actually, his presence is a sign that the same puppetmaster who pulled the strings, and failed, in 2013 to remove Assad, and as noted above was at least officially removed from the stage subsequently, is once again the person in charge of the Syrian campaign, only this time unofficially, and this time has Obama entirely wrapped around his finger.