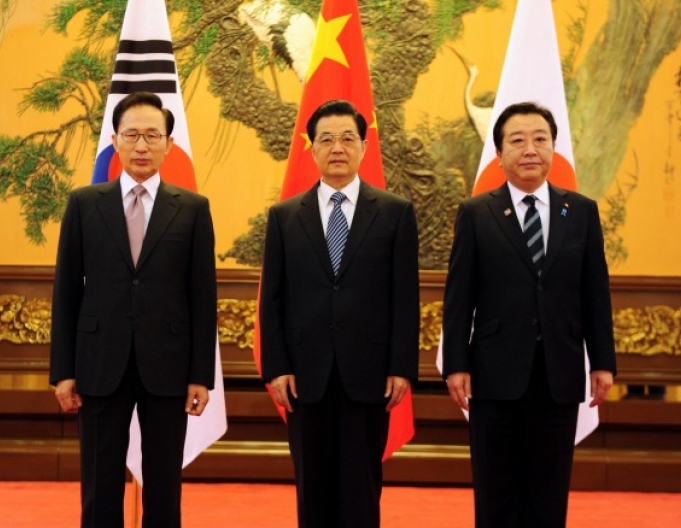 It has taken quite a lot of twists and turns for the three countries to get to where they are now.

“The CJKFTA negotiations will be launched this year”. It took a good four years for the three countries’ leaders to reach a consensus on signing these few words about a future Free Trade Agreement at the China–Japan–South Korea trilateral summit held in Beijing this May.

The trilateral summit was initiated by former Japanese Prime Minister Taro Aso, at the end of 2008, when the financial crisis spread from the United States to the rest of the world. The idea behind the meeting was “uniting the three East Asian countries to deal with the crisis.”

The relations between China, Japan and South Korea have always been very complicated. For example, at the Japan and South-Korea summit held in Kyoto at the end of last year, President Lee Myung-bak got into a fierce argument with Prime Minister Yoshihiko Noda by talking about the issue of the forced prostitution of Korean “comfort women” during the Second World War. Since then, Noda has held a grudge against Lee.

It hasn’t been plain sailing at all for these two countries. Before the meeting held two weeks ago in Beijing, the two countries’ delegations fought about where the meeting should happen. President Lee eventually made a concession and agreed to go to the hotel where the Japanese delegation was staying. The meeting only lasted 15 minutes. This set the record for the shortest meeting of the two countries’ leaders since the normalization of their relationship in 1965. Moreover, those 15 minutes replicated what happened last year with President Lee again launching into a long-winded speech about the comfort women.

At the same time, the two nations’ economic ministers were also supposed to meet. But when the Japanese minister Yukio Edano arrived at the hotel where the Koreans were staying, he was told that the Korean delegation wasn’t ready to see him – forcing his limousine to circle around the hotel until the delegation was all set.

As for the Chinese and the Japanese, even if it is the 40th anniversary of their resumption of diplomatic relations, their relations aren’t exactly cordial either. The two parties’ Prime Ministers – Wen and Noda – also got into a serious argument over the Diaoyu Islands issue at their May 13th meeting.

With terribly bad timing, the fourth World Uyghur Congress, an international meeting of exiled Uyghurs who oppose China’s occupation of East Turkestan, was held in Tokyo a day before the two prime ministers’ meeting. Diplomatic faux-pas. The summit meeting between President Hu Jintao and Noda, as well as the talks originally scheduled on May 14 and May 15 between the Chinese Foreign Minister and the Japan Federation of Economic Organizations, were cancelled.

However, it’s because of the tension between any two of the three countries that the formation of a trilateral community is particularly important.

Aside from bickering, the three countries managed to sign 18 ministerial-level agreements as well as over 50 framework agreements. The countries’ economic ties are also deepening. China is the biggest trade partner of both Japan and South Korea. The three nations account for 22% of the world’s population and 20% of global GDP and trade volume.

Japan and South Korea’s dependence on China is 20% and 30% respectively. They have both stepped into the “Chinese economic circle”.

So should Japan give precedence to the Trans-Pacific Partnership Agreement (TPP) with the U.S. as its core, or the Free Trade Agreement (FTA) led by China? This has certainly put the indecisive Noda and his government in a tremendous dilemma.

In Japan’s economic circles, where economic recovery is the priority, the majority of people hope for a quick and positive outcome with the trilateral FTA. After all, a combination of China-Japan-South Korea + ASEAN will create the world’s biggest economic community and trade market.

According to one Korean journalist who was present at the May summit, President Lee wants to sign the FTA with China before signing the trilateral one. Currently, the largest Korean objector to the Japan-South Korea FTA is the Hyundai Group, where President Lee once worked. Hyundai is sure to suffer if the agreement is signed.

I spoke to a Chinese scholar specialized in Chinese diplomacy. He used the NAFTA signed between America, Canada and Mexico in 1994 as an example, and believes that if the China-Japan FTA or the China-South Korean one were signed first, the trilateral FTA would be achieved more easily because the two smaller countries will both be worried about their rival monopolizing the Chinese market.

Of course, all three parties have realized by now that the negotiations will not be an easy task.

One of the Japanese foreign officials who participated in the May session expressed as much: “We call it diplomatic mahjong. In other words, there are continuous trade-offs and exchanges between the three parties in over 90 kinds of industries. In each industry, every country has to face objections from insiders or domestic politicians. This mahjong game is never going to be easy. ”

The analogy of a “diplomatic mahjong” is a very interesting one. Nevertheless, since there are only three players in the game, I wasn’t sure it was pertinent, because you generally need four for a mahjong game. But the Japanese official explained: “There’s a shadow player – America – the boss of Japan and South Korea.”

Since Prime Minister Noda stepped into the political arena last September, the announcement of Japan’s participation in the consultations around the trilateral FTA is the first time he has gone against America’s will. He is wondering how he is going to justify all this to the boss when he returns home.

Even though a China-Japan-Korea FTA will probably be signed eventually, a game with a shadow player is certainly going to be a long one.