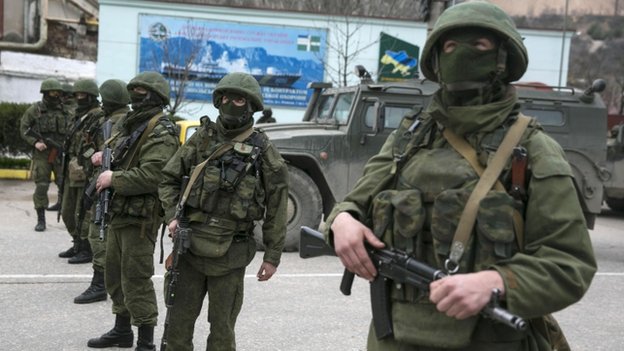 This is fast turning into the worst crisis between Russia and the West since the short conflict between Georgia and Russia back in 2008.

That war ended with Georgia humbled and the Russians firmly in control of two breakaway, largely Russian-speaking Georgian enclaves.

South Ossetia and Abkhazia were subsequently recognized by Moscow as separate states, though effectively protectorates of Russia.

The West for all its condemnation was left largely as a spectator on the sidelines.

The Crimea drama is of an altogether different significance.

If this turns into a full-scale battle of wills between Moscow and Kiev, the consequences could be unthinkable – at worst the provocation of a bitter civil war inside Ukraine; instability on Europe’s frontiers; and a bitter legacy between the Russian President Vladimir Putin and the West that could have serious ramifications across a range of international problems from Syria to the fate of Iran’s nuclear programme.

What in many ways is so remarkable is how predictable Russia’s behaviour has been; straight from the post-Soviet play-book.

It has involved a combination of political rhetoric (talk of threats to Russian minorities, orthodox religious sites and so on), threats of economic pressure (the imposition of new customs duties at the Russian-Ukrainian frontier), and overt military action at least in the Crimea with key installations and government buildings seized by troops in unmarked uniforms whose weaponry, vehicles and behaviour marked them out as regular service personnel taking their orders from Moscow.

For all the talk of a potential Russian invasion of Crimea, the facts on the ground are such that Russia, to a large extent, is already in control there.

The Black Sea Fleet headquarters in Sevastopol gives Moscow all the military clout it needs to overawe local Ukrainian defence forces, and the Russians look to have been bolstered by small numbers of specialist units flown in over recent days.

While the upper house of Russia’s parliament has given approval for a more widespread deployment of troops to Ukraine, many experts wonder if this really remains an option for the Russian president or is merely a signal intended to up the pressure on Ukraine’s new interim government.

The danger of course is that such bellicose rhetoric from Moscow may inflame local tensions in the more pro-Russian eastern part of Ukraine.

Disturbances and violence would inevitably give Russian forces a pretext to act though here their involvement is more likely to spark a bitter civil war.

Risks
The Russian president’s behaviour may be predictable in regard to past crises in Russia’s “near-abroad” but in another light it is more perplexing.

There are huge risks here for a Russia that for the moment may be buoyed up by strong oil and gas prices but which is highly susceptible to fluctuations in energy markets.

Russia has re-established itself as a diplomatic player on the world stage, not least given its pivotal (though not uncontroversial) role in the Syrian crisis.

Is Mr Putin really ready to put this international standing at risk? More significantly in the Ukrainian context, while this is fast developing into a crisis with overtones of Cold War tensions, the reality of Ukraine’s difficulties comes down to one simple truth.

It is fast becoming an economic basket-case due to the mismanagement and pilfering of the previous leadership in Kiev.

It needs massive external economic support. This cannot come from Russia alone. It would prove a millstone around the Russian economy’s neck.

Limited options
Any economic solution must draw in international financial institutions and Western governments too.

That is going to involve some kind of partnership with Moscow and there is not currently going to be much good will towards the Kremlin.

For all the noises of international disapproval of Russia’s course from European leaders and even from Washington, there is little these countries can do in the short term beyond registering their discontent.

US President Barack Obama has underlined that there will be costs to Russia for any military intervention in Ukraine. But Washington’s options are limited.

The crisis in many ways highlights how successive Obama administrations have struggled to form a new relationship with Russia.

The failed “re-set” in ties with Moscow of Mr Obama’s first term has given way to an uneasy effort at crisis management in the second, punctuated by moments of displeasure.

Mr Obama’s decision not to attend the Sochi Winter Olympics was seen by many as a gesture of disapproval at the growing harassment of gay people in Russia.

Washington and the European Union may seek to craft a more supportive policy towards the new authorities in Kiev.

But the Russian president has moved first to secure Russia’s interests, in the hope of ensuring that Moscow will continue to have a key role in helping to shape Ukraine’s political future.