Wave of change in the Arab world

Vice President of Egypt refuses to accept foreign interference .- The Minister of Health 13 confirmed dead and 1,200 wounded .- The pro-Mubarak hotels surround the press .- A Greek journalist, stabbed other journalists arrested and equipment smashed 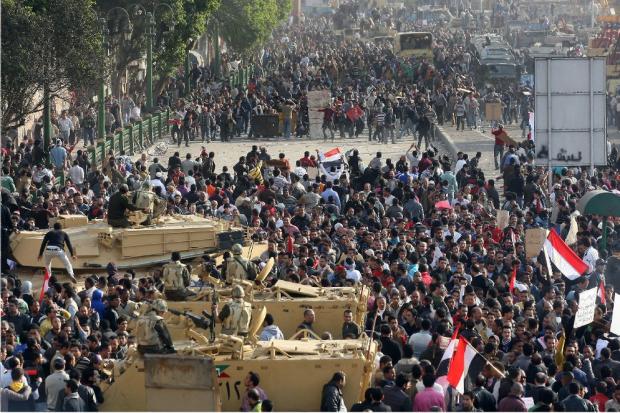 Central Cairo has again become the scene of a battle where violence and vandalism have continued, despite the military opted for a few hours to open fire, air, with the objective of dispersing clashes. Far from diluting the chaos installed on the streets of Cairo for two days, the shots have been lost in the noise of the Liberation Square, the heart of the fighting, and opponents of Mubarak move around the city a single goal: to silence any dissenting voice to the regime. As journalists and members of NGOs seeking safe places to avoid yesterday lynchings and robberies, have now been assaulted in their own hotels, they have dodged bullets and slashes and some have been arrested. Meanwhile, the government, through an interview given by Vice President Suleiman Oman, has denied any involvement with the violence and pledged to maintain a dialogue with the oposisón to initiate constitutional reforms.

Although the Egyptian vice president has stressed the idea of avoiding the chaos with a power led by Mubarak, the fact is that the clashes are becoming increasingly worrying. Already been confirmed Catalan six journalists, members of the TV-3 30 Minutes, Have been arrested by the Egyptian military police and taken on a bus blindfolded. Later, via Twitter Have confirmed they are safe and waiting to be released throughout the day.

With the violence installed in the streets of Cairo, Suleiman is the viewer sitting in front of the Egyptian state television and held a speech in which he assumes no responsibility for the clashes in the capital. The vice president has warned that “if protests continue, the country will be paralyzed,” so a third of the country’s income will be affected. Furthermore, it has been inflexible to international pressure and stressed that “it is unacceptable that foreign countries meddle in its” internal affairs. ” Although it has not allowed any international interference, the vice president himself has promised dialogue with the opposition.

Suleiman has said that Mubarak will meet with his words and leaves office in September after the presidential elections, which are not present his son Gamal, and has urged all political groups to participate in the dialogue with the Government to implement necessary reforms. Suleiman stressed that Mubarak has met the “legitimate demands” made by the Egyptians and insisted on the idea he will not stand for re-election in September. “Nor has any member of his family present,” he stressed. According to the former head of the intelligence services, which call for the resignation of President want the “chaos” because there can be “a state without a head.”

“There are 200 days to the election,” recalled the vice president, and therefore, before it reaches that point it is necessary to carry out “a series of constitutional and judicial reforms take time.” Suleiman has been much emphasis on the lack of time, and has ruled out going to dissolve the two houses of parliament, as this prevents progress the necessary constitutional reforms, especially those relating to the president.

Foreigners in the spotlight

While the Egyptian government is trying to convince the general view that tries to restore peace and order in the country, The U.S. has alleged that there is an orchestrated campaign by the Executive to silence journalists and foreign voices. Yesterday international reporters were harassed by supporters of Mubarak, With constant attacks while trying to get around the square. Today, supporters of President Mubarak has gone further: they have surrounded as the Ramses Hilton hotel, where many journalists are staying, and have finally begun to go looking for correspondents. What has already confirmed that Al Jazeera is a Greek reporter covering the protests from the Place de la Liberation has been stabbed. So far, no one knows the extent of injuries to the reporter. It is known that among the dead could include an alien who, according to Al Arabiya, was beaten by Mubarak supporters to death.

Although the military has tried unsuccessfully to disperse Mubarak supporters groups, Which are organized and armed thugs and supporters of Mubarak have violated the military cordon this morning, have tried to take the city and have fired on protesters. The factions are waging a fierce battle for control of the symbolic square, the center since last Tuesday’s massive protests against the Mubarak regime.

Amnesty International has condemned the arrest of one of their representatives and other human rights defenders after the military police took control of the Hisham Mubarak Center. The NGO partner has been arrested in Cairo with a representative of Human Rights Watch and other activists, and taken to an unknown location in the Egyptian capital. “We demand the immediate release of our colleagues and those who accompany them so they can continue to monitor the human rights situation in Egypt at this crucial time without being exposed to harassment or arrest,” asked Salil Shetty, secretary general of AI.

The violence erupted when the president announced he would not resign, despite the mass demonstration that was aimed his way. Today, in another attempt to ease tensions, the new vice president of Egypt, Omar Suleiman, has announced it will not be submitted to the next election of Mubarak’s son, Gamal, something the Egyptians long suspected would happen, once abandoned its parent power. Suleiman has also promised to punish all those involved in those involved in violence.

But are not the only movement that has begun to Mubarak’s government. The Egyptian general prosecutor has issued an order prohibiting leaving the country, several former leaders of the regime of Hosni Mubarak, including former Interior Minister Habib el Adli. The order also affects the former leader of the National Democratic Party (NDP) Ahmed Ezz. The Public Ministry has also decided to freeze their bank accounts until the country returns to stability and security, as reported by the Egyptian news agency Mena.

Thirteen officially been confirmed dead and 1,200 injured each, according to figures from the Ministry of Health, which includes the BBC and The Guardian . The Army has created a security zone 80 meters to prevent more victims, but has not intervened. The Egyptian Prime Minister Ahmed Shafiq, has called for “forgiveness” for violence, has insisted that the government has nothing to do with the violent clashes and ensures that due to a “clear error” in the security being investigated. He assured also that no further violence.

The Muslim Brotherhood, the main opposition to the president, has called for a national unity government to replace Mubarak. The group, the Islamic court, has a growing influence of concern for Egypt’s Western allies. Both this group as El Baradei Symbol of the Egyptian opposition and former director of the International Atomic Energy Agency, said, meanwhile, that refuses to attend the call of the government to find a joint solution as Mubarak remains in power.

U.S., EU and UN call for end to conflict

International diplomacy basically some European Union countries, Continues to press for court Mubarak violence and offer a solution to the conflict. Ban Ki Moon, UN secretary general has called on both parties to sit to resolve the conflict.

The U.S. president, Barack Obama, has also called for the end of violence in Egypt and wished that “the wishes and aspirations of the Egyptian people” will come true. ” “We pray that the violence in Egypt ends and the rights and aspirations of the Egyptian people come true and that a better day dawns in Egypt and worldwide,” said the U.S. president during the National Prayer Breakfast.

The clash between supporters of the president and the people who want their march has grown from Sticks and stones yesterday to firearms this morning in the Liberation Square, Cairo. The president’s supporters have been shot and thrown molotov cocktails into a crowd of opponents.

Undercover operation to bust the protest

The origin of the movement this morning is in the explosion of violence yesterday afternoon. The Egyptian president decided that only a bloodbath could save his regime and launched thousands of his thugs, disguised as protesters, on the symbolic center of the revolt. It was a day as violent as grotesque. Disguised repression of civil strife, while attending military revenge Mubarak as impassive as in previous days.

Mubarak’s speech on Tuesday night was a sign that the regime and their leader still felt strong. Never mind that hundreds of thousands of people had just beg on the streets of Cairo and other cities in the president’s resignation and a transition to democracy. Mubarak announced he will not seek re-election in September (A great sacrifice by a man in his 83 years with cancer), promised that he would die in Egypt and sent a message to its citizens working in which he appealed to the emotions, the past and the homeland. Sought to vibrate Egyptian nationalism, the oldest in the world. And he reiterated that he alone separating Egypt from chaos. Not advised, however, that he thought just wreak havoc within hours.

Several demonstrations of support for Mubarak formed in different areas. The largest march converged on the Place de la Liberation, which were concentrated thousands of opponents of the regime. At first, both crowds approached with relative ease. Opponents tried to block the way to the newcomers with a human chain. The loyal to Mubarak expressed their intention to “take the city to prove who the real majority.” “We do not want revolution, but peace, and these days we respected the opposition now demand respect us because the time is critical,” said Ahmad Osman, a pharmacist of 36 years seemed, in fact, a pharmacist. Other jalearon his words.

The return of the police

In the dust, noise, shock, screams and blood, something became clear: the police had gone, had been limited to preparing the time. Burly men who introduced themselves as pharmacists, with a newly learned English phrases, rebuked this reporter because, they said, the foreign press had lied in the past few days. When asked to show a document that certifies them as “pharmaceuticals”, responded with shock. The persecution of foreign journalists is a constant. Dozens were injured yesterday and theft of cameras and computers.

Violence is not abated within hours and continued at night. The regime’s opponents formed a human chain to protect women and children and tried to plug the entrances to the plaza. “We fight for our lives, we fight for our lives,” they chanted. The rich people threw Molotov cocktails regime and be heard automatic weapon fire. There were bloody people everywhere. Several opponents sitting on the floor crying. “No way, we lost again, we lost again,” said one of them.

Late at night, were throwing molotov cocktails at the plaza and nearby. Several of them fell by the Egyptian Museum, an area dominated by supporters of the regime. A truckload of police fired water pressure to prevent a fire in the building, full of archaeological treasures. Outside the Tahrir Square, the streets were relatively quiet. There are no known incidents as violent as those of Cairo in Alexandria and other Egyptian cities.