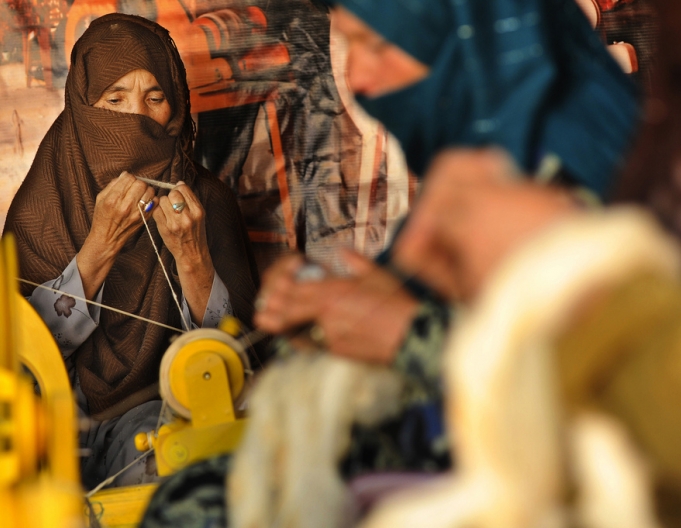 Girls are playing volleyball in a dusty courtyard. Gazing toward the foothills of the Hindu Kush offers some pretty spectacular scenery. But right now that’s the last thing on the girls’ minds. The landscape, after all, is nothing new for them. Playing sports is what’s changed for these girls, who openly laugh and whoop it up when they score points.

Back in their villages, under the eyes of the boys and men, sports are off limits. Here, at the Refugee Education Trust (RET) center in Charikar, the capital of Parwan province in eastern Afghanistan, sports are encouraged – along with reading, writing, computer work, learning to speak English and knowing about the fundamentals of human rights. It’s a kind of refuge in male-dominated Afghanistan that gives women and girls the kind of opportunities they simply aren’t going to get in a state-run school.

The RET is a 12-year-old rights organization headquartered in Geneva, Switzerland. Its center in Charikar has been up and running for three years, and so far 240 women and girls have received a basic education here. Some come here because their parents don’t like the fact that, at state-run schools, they would have contact with boys and male teachers, says Asma Sadat, the center’s director. With that in mind, the center chose to employ only women teachers. Its doctor is also female.

Most families visit the center first before allowing their girls to come here regularly. But there are also a lot of women students here, adults who are beyond school age but – during the three decades of constant conflict the country has been through – never had the opportunity to learn so much as the alphabet. They were either busy fleeing the fighters, or else the males in their family were against their getting an education.

Nervous about the future

More than a decade has passed since the fall of the Taliban. Internationally-funded projects like the one in Parwan are operating throughout the country, helping to improve opportunities for women seeking a greater role in public life. There are questions, however, about whether the various projects will survive the planned pullout of international troops in 2014.

Many Afghan women fear places like the RET center will no longer be financed and that women’s progress will come under threat. After all, the ideology that reduced women to the place they had under the Taliban is still alive and well. Equal rights for women in Afghanistan may be constitutionally guaranteed, but otherwise don’t have much of a foothold.

Recently, the country’s influential top religious council in Kabul published a paper that, among other things, outlined its views on the role of women in society. The council made it clear that it in no way considered women the equals of men. In fact it recommended that close attention be paid to keeping women away from men they don’t know, whether it be at school, out shopping or at the office.

By posting the council’s recommendations on an Internet site — even just for a brief period before taking them down again – Afghan President Hamid Karzai accorded them a certain amount of weight. Indeed he appeared to support the council’s ideas. Chances are, however, that it was some kind of ploy on the part of the ever-manipulative Karzai as he seeks to forge a deal with the Taliban by offering them a place in his government if they agree to lay down their weapons. The Islamists have so far been giving him the cold shoulder, however, and in an attempt to win them over he makes all kinds of overtures to appease them.

Even before Karzai’s latest move, Afghan women had been warning that hard-won rights could well be one of the bargaining chips, should the government and the Taliban ever really sit down together at the negotiating table.

Heather Barr of Human Rights Watch recently drew very mixed conclusions about the situation of women in Afghanistan. Although they theoretically have access to education, over half of Afghan girls do not go to school. “Beneath the apparently changed surface, deep-seated problems remain,” Barr wrote in her analysis.

Struggling to sleep through the night

Still, there’s no doubt that overall, the situation of women in the country has gotten better. During the Taliban rule, women were completely excluded from public life. Now women sit in parliament. There is a Ministry for Women’s Affairs. Women anchors deliver the news on TV. Yet conservative values regarding women are still strongly embedded in the society.

Take the example of Nadera Geya. She heads the authority for women’s issues in Kunduz, in the country’s north, not far from where the German armed forces in Afghanistan have their HQ.

Geya was initially reserved about our request for a meeting, but she ended up giving us quite a long interview at her office. Geya begins by pointing out how much progress has been made. “The situation of Afghan women has genuinely improved over the past few years, we can really see the changes,” she says. The involvement of the international community has really paid off, she explains, not least because of the number of Afghan women who have come to understand “that they even have rights at all.”

But the position of women is still very vulnerable, Geya carefully points out. She herself gets threatening phone calls, and two men recently drove past her on a motorcycle and threatened to kill her. She takes sleeping medication to be able to get some rest at night, but is determined not to let the intimidation get her down. As we take our leave, Geya tells us once again how determined she is to keep fighting for women’s rights.

That’s what Asma Sadat, the jurist who runs the education center in Charikar, intends to do as well. With much enthusiasm, she describes the options that a center like this offers. She talks about the significant boost to the self-confidence of the women who come here, and about how the experience opens doors for them to accomplish things.

But Sadat is more than aware of the hurdles that still have to be overcome: “Women have rights in Afghanistan – it says so in the Constitution. But [those rights] are still just on paper,” she says. In practice, men define what women in Afghanistan can — and can’t — do. “The biggest problem,” according to Sadat, “is that women still don’t know their rights.”

The school bell rings. The volleyball game winds down, and girls and women emerge into the court from inside the center. One of them tells us that she was never able to go to school before. The 20-year-old had to stay home and work. She learned about the Charikar center from media reports. She got her family to come and look around, and they decided she could enroll.

“I’m much more daring now about going out alone, for example to the bazaar,” she says. Her classmates stream past her, on their way home. Many of them slip burkas on over their clothes before heading back to their villages.