A ship flying in space:’ Earth seen through the eyes of an astronaut 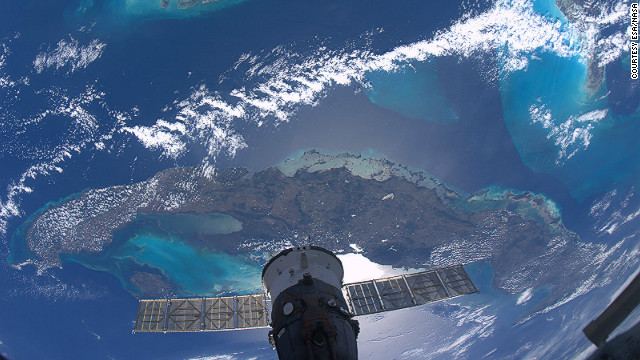 Nespoli posted regular updates on Twitter. “I was amazed by the response from people. It was very fulfilling for me,” he said.
STORY HIGHLIGHTS

(CNN) — As an estimated one billion people around the globe take part in events to mark the 42nd Earth Day, Paolo Nespoli’s images provide a striking reminder of our planet’s awe-inspiring beauty and fragility as an eco-system.

During a six-month mission to the International Space Station (ISS) last year, the Italian astronaut snapped around 26,000 images, posting daily updates on Twitter.

“I really tried to capture what I was seeing. I was amazed by the response from people. It was very fulfilling for me. I was doing something which was very interesting for me, but it made me more happy that I could share the images,” Nespoli said.

Nespoli explained to CNN what it’s like to see the world “turning around your feet” and the unique perspective space travel provides on our planet and humans’ collective impact on it.

Describe the view of Earth from space?

It’s a most unreal view you have from up there. It’s look as though it’s painted. It looks like a ship flying in space.
Paolo Nespoli, ESA astronaut

Paolo Nespoli: “It’s a most unreal view you have from up there. It’s look as though it’s painted. One of the things you gain up there is an appreciation of planet Earth as a kind of ship. It looks like a ship flying in space.

“A lot of the time you’re up there you are working so you don’t have a lot of time to look out of the window. When you do, most of the time you see oceans and clouds — which is really nice.

“But it really takes a little bit of time before you acquire a perception of where you are and what you are looking at and how to look at it in the best way.

“After a month, a month and a half, something strange happens — you look out of the window and you know where you are. You might be over Australia, Africa, you just know. It’s amazing how you just develop this.”

How high does the ISS orbit?

How did traveling to space change your outlook on Earth?

PN: “I felt like a human being, a terrestrial guy — not an Italian or a European. I felt like an earthling.

You see the atmosphere which covers the earth like a blanket. It looked like if I would blow on it too hard it would float away
Paolo Nespoli

“You get an appreciation of how delicate the planet is. You see the atmosphere which covers the Earth like a blanket. It looked like if I would blow on it too hard it would float away. We know if that get’s corrupted in a certain way that’s the end.”

How do you think humans are affecting the planet?

PN: “The impact we are having on this planet is surely microscopic when we look at one single event, but when you look at it and you repeat these events all over – a few miles across here, a few miles across there, a river here, a river there, a city here, a city there — and it’s clear we are a major force in shaping the crust of this planet and its clear we have the capability of imparting changes.

“I cannot say we are bad, or that we are causing the planet to go hot or cold. We don’t have enough data. But it’s clear that we are doing things that have a huge potential of making changes. We need to understand more. It’s a risky situation with a very delicate eco-system balance which can be dramatically skewed.”

Thoughts on the future of space travel?

PN: “I think space travel will become successful as a tourism activity. I wish everybody could go up there and see the world from a different point of view, with different eyes.

“I would, for sure, send up the politicians (some of them we should leave there!) to change the way they think, but I would also send up philosophers, journalists and theologians.”