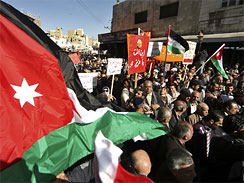 AMMAN – Jordan’s King Abdullah II fired his government Tuesday in the wake of street protests and asked an ex-prime minister to form a new Cabinet, ordering him to launch immediate political reforms.

The dismissal follows several large protests across Jordan inspired by similar demonstrations in Tunisia and Egypt — calling for the resignation of Prime Minister Samir Rifai, who is blamed for a rise in fuel and food prices and slowed political reforms.

The king named Marouf al-Bakhit as his prime minister-designate, instructing him to “undertake quick and tangible steps for real political reforms, which reflect our vision for comprehensive modernization and development in Jordan,” the palace statement said.

The king also stressed that economic reform was a “necessity to provide a better life for our people, but we won’t be able to attain that without real political reforms, which must increase popular participation in the decision-making.”

He asked al-Bakhit for a “comprehensive assessment … to correct the mistakes of the past.” He did not elaborate. The statement said Abdullah also demanded an “immediate revision” of laws governing politics and public freedoms.

Meanwhile, in Egypt, thousands of protesters staged their biggest demonstration yet calling for the ouster of President Hosni Mubarak.

When he ascended to the throne in 1999, King Abdullah vowed to press ahead with political reforms initiated by his late father, King Hussein. Those reforms paved the way for the first parliamentary election in 1989 after a 22-year gap, the revival of a multiparty system and the suspension of martial law in effect since the 1948 Arab-Israeli war.

But little has been done since. Although laws were enacted to ensure greater press freedom, journalists are still prosecuted for expressing their opinion or for comments considered slanderous of the king and the royal family.

Some gains been made in women’s rights, but many say they have not gone far enough. Abdullah has pressed for stiffer penalties for perpetrators of “honor killings,” but courts often hand down lenient sentences.

Still, Jordan’s human rights record is generally considered a notch above that of Tunisia and Egypt. Although some critics of the king are prosecuted, they frequently are pardoned and some are even rewarded with government posts.

It was not immediately clear when al-Bakhit will name his Cabinet.

Al-Bakhit is a moderate politician, who served as Jordan’s ambassador to Israel earlier this decade.

He holds similar views to Abdullah in keeping close ties with Israel under a peace treaty signed in 1994 and strong relations with the United States, Jordan’s largest aid donor and longtime ally.

In 2005, Abdullah named al-Bakhit as his prime minister days after a triple bombing on Amman hotels claimed by the al Qaeda in Iraq leader, Jordanian-born Abu Musab al-Zarqawi.

During his 2005-2007 tenure, al-Bakhit — an ex-army major general and top intelligence adviser — was credited with maintaining security and stability following the attack, which killed 60 people and labeled as the worst in Jordan’s modern history.