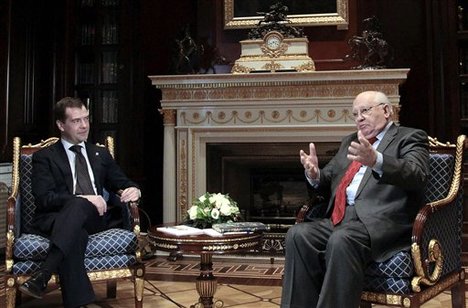 President Dmitry Medvedev has decorated Mikhail Gorbachev with the highest state honor in a rare recognition for the last Soviet leader, who is often ignored at home.

Mr Medvedev opened his suburban Moscow residence to Mr Gorbachev on his 80th birthday, exchanging jokes with the 1990 Nobel Peace Prize winner and awarding him a tsarist-era medal that now serves as Russia’s top state honour.

Many Russians refuse to forgive Mr Gorbachev for overseeing the demise of the Soviet empire and Mr Medvedev conceded that his role in history “can be assessed in different ways”.

But inviting Mr Gorbachev to a spread of sweets and champagne, Mr Medvedev said the Andrei Pervozvanny order, which was only restored in 1998, was “the proper recognition of your enormous work as head of state”.

“You headed our country in a very difficult, dramatic period,” Mr Medvedev said, adding that the decoration was a “symbol of the state’s respect” for his work.

Mr Gorbachev also received rare words of praise from Prime Minister Vladimir Putin, the former president and current de-facto leader, who once famously called the Soviet Union’s collapse one of the greatest misfortunes of history.

Mr Putin sent Mr Gorbachev a personal telegram calling him “one of the eminent statesmen of modernity who made a telling impact on the course of world history and did much to strengthen the authority of Russia”.

The congratulations marked a rare personal victory for Mr Gorbachev, who has had cool relations with the current authorities and expressed increasing bitterness over the way his contribution to history is assessed at home.

Moscow’s last Communist leader is known internationally as the man whose perestroika and glasnost reforms altered the course of history by burying the Soviet Union and liberating Eastern Europe.

But at home, he is largely despised for letting go of an empire and reducing Russia to a secondary role on the world stage.

Mr Gorbachev has admitted to being hurt by the criticism and he has used the unprecedented media attention accompanying his birthday to criticise the more recent course Russia has taken – particularly under Mr Putin.

He used one interview overnight to urge Mr Putin against running for another term as president and to warn of the dangers of Arab-style social revolt.