Gore’s rallying call: ‘Climate crisis is a struggle for the soul of America’

Gore evokes the Iraq war, credit crunch, civil rights and emancipation to argue the US electoral system is broken and only a mass movement can deliver reason on global warming 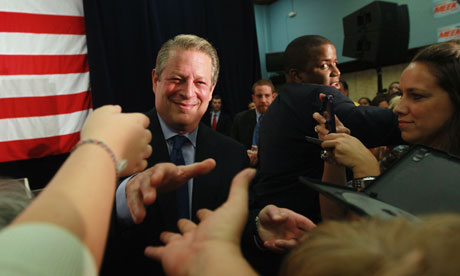 Al Gore, pictured in Florida in September 2010, argues in a news article that people pressure on politicians is key to solving the climate crisis. Photograph: Joe Raedle/Getty Images

Let’s start at the end, with Al Gore’s final paragraph in his long and fascinating piece for Rolling Stone magazine:

The climate crisis, in reality, is a struggle for the soul of America. It is about whether or not we are still capable — given the ill health of our democracy and the current dominance of wealth over reason — of perceiving important and complex realities clearly enough to promote and protect the sustainable well-being of the many. What hangs in the balance is the future of civilization as we know it.

The doom-laden last line will annoy as many as it pleases, true or not. But, writing from the other side of the Atlantic (though not out of reach of the effects of US carbon emissions, or anyone else’s), it is the critique of the current US electoral system that stands out: “crass, degrading and horribly destructive to the core values of American democracy”.

Gore argues that, through now unlimited and secret campaign finance, “Polluters and Idealogues” have captured US politics to the extent that reason and the common good can no longer win out in debates. He cites powerful examples: how, on the verge of the second Gulf war, 75% of Americans thought Saddam Hussein was behind the 9/11 atrocities; how the deregulation of Wall Street led the world’s economy to the brink of collapse.

Why does this matter when it comes to climate change? Because without the US, the world’s biggest historical polluter, on board genuine action on a global scale is unlikely. Gore says the failure of the 2009 UN climate summit in Copenhagen was “ensured” by President Barack Obama’s failure to pass laws to cut carbon emissions through the Senate. He is pretty tough on Obama, while pledging his support and acknowledging the extraordinary economic difficulties he faced when taking office.

President Obama has never presented to the American people the magnitude of the climate crisis. He has simply not made the case for action. He has not defended the science against the ongoing, withering and dishonest attacks. Nor has he provided a presidential venue for the scientific community — including our own National Academy — to bring the reality of the science before the public.

While that criticism of Obama has attracted most attention, it’s a small part of Gore’s argument. His solution to the problem is an old one, framed in the powerful context of the African-American civil rights movement and the emancipation from slavery:

President Franklin Roosevelt once told civil rights leaders who were pressing him for change that he agreed with them about the need for greater equality for black Americans. Then, as the story goes, he added with a wry smile, “Now go out and make me do it.”

This is not naive; trust me on this. It may take more individual voters to beat the Polluters and Ideologues now than it once did — when special-interest money was less dominant. But when enough people speak this way to candidates, and convince them that they are dead serious about it, change will happen — both in Congress and in the White House. As the great abolitionist leader Frederick Douglass once observed, “Power concedes nothing without a demand. It never did, and it never will.”

It echoes calls for a mass movement we have reported on this site, including that by former Friends of the Earth director Charles Secrett this month, and another by then UK climate change secretary Ed Miliband in 2008, who told us:

When you think about all the big historic movements, from the suffragettes, to anti-apartheid, to sexual equality in the 1960s, all the big political movements had popular mobilisation.

Without that mass movement applying pressure, it seems unlikely politicians will ever summon the courage to act until the worst impacts of global warming are upon us.

What then? It’s an ugly scenario of conflict and migration, but here’s one thought that might hold the attention of Gore’s “Polluters and Idealogues”, whose money courses through US politics. It’s a warning from economist Nick Stern that, without greenhouse gas cuts, the US could be shut out of international markets for being too dirty.