Former Speaker of the House Newt Gingrich declared Thursday night that President Trump is effectively ‘organizing’ a majority of support that will get him reelected by carrying through on promises and ‘standing up for America’.Gingrich made the comments during an appearance on Fox News Channel’s “Hannity,” comparing Trump’s leadership to that of the seventh US President Andrew Jackson. 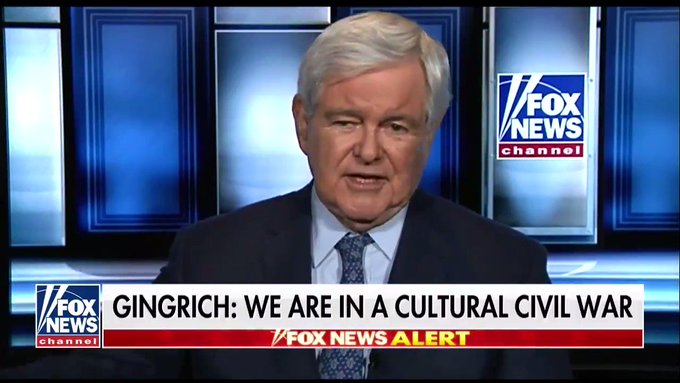 .@newtgingrich: “Inch by inch, #Trump is actually organizing, exactly like Andrew Jackson, a majority that, I think, will get him re-elected, and that will actually be decisive in changing America’s future.” #Hannity

“You see Trump doing what he promised he would do. You see him standing up for America.” Gingrich continued.

Gingrich noted that the US is engaged in a ‘cultural civil war,’ with Trump’s vision, shared by a majority of Americans winning out.

“And your choice is left-wingers who think it is OK to have thousands of people cross the border versus protecting America.” the former speaker exclaimed.

“You know, inch by inch, Trump is actually organizing, exactly like Andrew Jackson, a majority that, I think, will get him re-elected, and that will actually be decisive in changing America’s future.” Gingrich urged.

In an op ed published Thursday, Gingrich expanded on his comments, noting that Trump’s rise in popularity has coincided with the collapse of the “elite media.”

“Imagine the frustration building in elite media offices across the country. Lately, the members of the elite media have been relentlessly bashing President Trump,” Gingrich wrote.

“In weaving together this false narrative, members of the elite media are collectively building an effort to uplift left-wing values and diminish the achievements of conservative leadership – specifically the Trump administration.” he added.

“The elite media’s intense and pervasive hostility has begun to vaccinate the American people against its opposition to President Trump,”Gingrich continued.

“At the same time, the Trump presidency has a lot of good things going for it. The Republican tax cuts are working. People are getting bonuses and pay raises, and they are seeing companies beginning to reinvest in America.” he added.

Before Trump was elected, Gingrich predicted he would succeed despite all odds because he is an outsider, not an establishment Republican, and not part of the elite.