It seems that God can take a musical joke. Praise the Lord, Lady Gaga is to release an Easter single. The exotic singer has taken her interest in religion a step further with a song called “Judas” which will be launched next week. According to Lauriann Gibson, her choreographer, the new song is essentially “a conversation about salvation, peace and the search for truth”. God was “active in a big way” in the making of it.

Yet, even before it has been heard, there has been a fuss. News that her ladyship will be singing about Mary Magdalene and Judas Iscariot has caused alarm. Lyrics, said to be of the chorus of the song, have cast doubts on its seriousness of tone: “I’m just a Holy Fool, oh baby he’s so cruel, but I’m still in love with Judas, baby.” In America, the usual posse of the outraged have been out demonstrating, explaining how upset they are, and promising the singer and her “pervert ways” a special place in hell. How fragile their faith must be. The idea that a pop song can deliver any kind of assault on one of mankind’s most established religions is almost, but not quite, as silly as the belief that God was an invisible creative director while it was being recorded. The zealots should, if anything, be giving praise of thanks that Lady Gaga has joined the long tradition of pop singers traducing religion. History shows that, every time it happens, faith emerges not only unharmed but victorious. It is not the religiose warblings of musical goody-goodies, from Pat Boone to Cliff Richard, which communicate the power of belief, but the songs of those said to be doing the devil’s work.

When the American Catholic League spokesman Bill Donahue accuses Lady Gaga of “trying to rip off Catholic idolatry” he is, in an admittedly rather muddled way, on the right track. Christian faith involves sin, sacrifice, longing, ritual, surrender, pain and ecstasy; for many – particularly those going through adolescence – it has a powerful sexual element to it.

The reason why rock music uses its imagery, phrases and stories is that they still pack an emotional punch. In an age when excessive adoration and guilt are distrusted, the extremes of feeling contained in Christianity offer an obvious release.

By exploiting religion, these songs are also celebrating its power. Neither the controversy, nor the wailing and gnashing of teeth which greets it, are anything new. Madonna was playing the same game 20 years ago with “Like a Prayer” (“When you call my name. it’s like a little prayer, I’m down on my knees, I want to take you there”).

Even the very different musical tradition of songs mocking religion have failed to land a punch on their target. For all the fuss surrounding Jerry Springer – The Opera, it is unlikely that anyone questioned their faith having seen it. The 1980s band XTC found themselves in hot water with their rather solemn critique of Christianity “Dear God” which then went on to be a minor hit. Before that, the great “God’s Song” by Randy Newman revealed the Creator as mildly amused by mankind’s gullible adoration.

There was more trouble back in the 1960s when Tom Lehrer took aim at the madness of Catholic ritual in “Vatican Rag”. The tradition of mixing religion and musical irreverence goes back a long time – Thomas Dorsey, who in 1930 wrote one of the great gospel hymns of all time “Take my Hand, Precious Lord” was responsible, a couple of years before, for a rather jauntier – and considerably ruder – song called “Tight Like That”.

It seems that God can take a musical joke. The fact that Christianity is still being plundered by pop simply confirms that it is still alive enough to be reinvented. Maybe the choreographer was right, and a divine hand was at work as Lady Gaga wrote her Easter message, “I’m just a holy fool, Oh baby, he’s so cruel.” 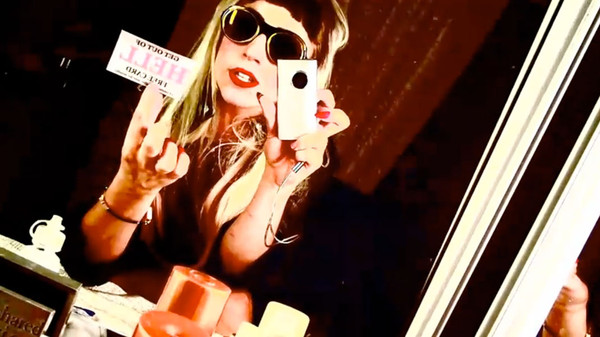 Lady Gaga gave her fans a treat for the weekend when she dropped her new single “Judas” days earlier than the previously announced April 19 release date. Right after the RedOne-produced song dropped, Gaga tweeted about the single, the second from Born This Way, due May 23.

“Even After Three Times He Betrays Me,” she wrote, harking back to the song’s lyrics about love and betrayal. “THE REAL JUDAS: HE’S EVERYWHERE, NOW. DON’T STOP UNTIL HE’S YOURS,” she added.

She also tweeted art for the song: In bright-red font, the word “Judas” appears in all caps, above a red cross with a heart in the middle. The art was teased in an installment of Gagavision earlier this week.

Shortly after the song was released, fans immediately reacted to the genre-defying track that mixes dance, metal and even reggae. “I’ve listened to it at least 20 times already…can’t get enough….going 2 b another number one for sure! PAWS UP!” SHforlife commented on MTV News’ article about the song’s release. “This song is legit…beat is fn hardcore to the max…genius…”