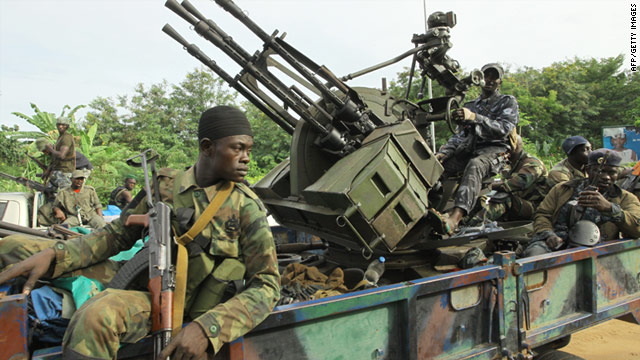 The fighters, loyal to President Alassane Ouattara, were 80% sure that Gbagbo was still in the residence, said Patrick Achi, a spokesman for Ouattara.

“We do not see why he shall not surrender,” adding the new government may seek to have Gbagbo tried by the International Court of Justice.

CNN could not independently confirm Achi’s claims, which include a report that Gbagbo’s TV station was destroyed.

But at least one resident in Abidjan said Gbagbo’s state TV station had been dark since Monday; early Tuesday, nothing was broadcast from the station.

The man, who did not want to use his name, said gunfire played throughout the town like a soundtrack leaving many feeling unsafe and scared.

Uncertainty and fear have been constant in parts of the Ivory Coast in recent weeks as a presidential stalemate has spiraled into a civil war.

The unrest dates back to November when Gbagbo refused to transfer power to Ouattara, who has been internationally recognized as the country’s president after elections.

Supporters from each side have clashed in many cities in the west African country, and in the last few days, international forces have jumped into the fray.

United Nations helicopters fired on a camp controlled by Gbagbo on Monday to prevent the use of heavy weapons against civilians and U.N. peacekeepers, a U.N. spokesman said.

U.N. Peacekeeping Director Alain Le Roy told reporters the body is not taking sides in the conflict, but had to act after three days of fire from Gbagbo forces left four U.N. peacekeepers seriously injured.

France also sent 350 peacekeepers to the country over the weekend and took control of the airport in Abidjan, the French Ministry of Defense said Sunday. The new French troops joined the existing U.N. peacekeeping mission of about 7,500 troops already in the country.

The International Committee of the Red Cross said Friday that 800 people had been shot to death in the western cocoa-producing town of Duekoue. A U.N. official put the death toll at 330 on Friday.