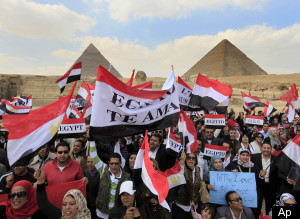 Why reject the Constitutional Amendments

Sobhi Saleh, a member of the judicial committee appointed by the military council, told Reuters news agency, that the army is set to cancel a law which gave ousted president Hosni Mubarak’s administration the power to decide who
was allowed to form a party, .

The panel is also expected to call a referendum in March on historic changes to the constitution unveiled on Saturday, including reforms that will open up competition for the post of president which Mubarak held for 30 years.

Both steps will be milestones along the road to elections, which officials have signalled could happen within months.

Egyptians hope for a new democratic era, though some are concerned that the transition from decades of autocracy is too fast.

“The military council hands power to the people in a gradual process,” Sobhi said.

“The parties law will be cancelled.”

The current procedures of the Supreme Council of the Armed Forces:

The formation of a legislative committee to draft a new constitution in the first combined meeting of the People’s Assembly and Shura Council.

A. According to the constituencies, and these departments do not reflect the population density per cycle

B. Electoral card does not obviate the possibility of them out there where the number of national voting cards issued under fictitious names will not be canceled.

Summary, you should focus on the following: