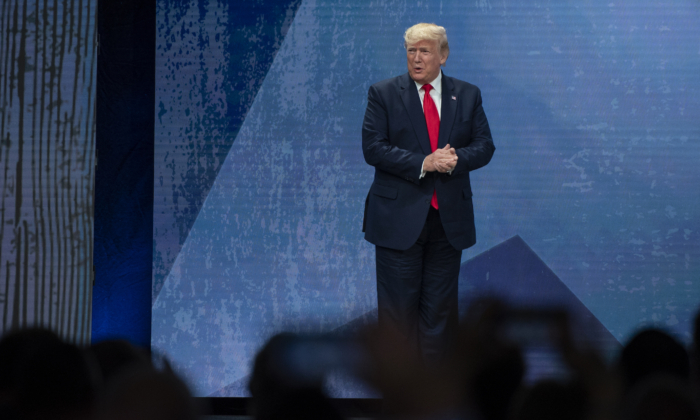 President Donald Trump’s attorneys called on the U.S. Senate to dismiss the articles of impeachment sent by the House and immediately acquit the president, calling the charges against the commander in chief a “brazen political act” that must be rejected.

In a trial memorandum released by the White House a day before the start of the third impeachment trial in U.S. history, the president’s attorneys argue that the articles of impeachment fail to state an impeachable offense and are the result of an “unconstitutional process” executed by House Democrats.

The articles are structurally deficient, the attorneys say, because each includes more than one alleged offense, making it impossible for senators to vote on isolated charges based on the evidence presented. The same issue had previously caused some senators to vote for acquittal during the impeachment trial of President Bill Clinton.

“The Articles of Impeachment presented by House Democrats are constitutionally deficient on their face,” the trial memo states. “The theories underpinning them would do lasting damage to the separation of powers under the Constitution and to our structure of government.”

House Democrats detailed their case for removing the president in a legal brief on Jan. 18. They allege that Trump abused the power of his office by withholding foreign aid from Ukraine in order to pressure Ukrainian President Volodymyr Zelensky to open investigations into Trump’s political rivals, including former Vice President Joe Biden.

“The facts are indisputable, and the evidence is overwhelming: President Trump abused the power of his office to solicit foreign interference in our elections for his own personal political gain, thereby jeopardizing our national security, the integrity of our elections, and our democracy. And when the president got caught, he tried to cover it up by obstructing the House’s investigation into his misconduct,” the Democrats allege.

Trump’s attorneys assert that the House impeachment inquiry failed to produce a single witness who claims to have firsthand knowledge of Trump conditioning the release of military aid or a White House meeting with Zelensky on Ukraine announcing investigations. The charges in the article alleging abuse of power also rely on a “theory” by the Democrats that there was no legitimate reason for Trump to ask Zelensky about interference in the 2016 presidential election and the controversy surrounding Biden’s son Hunter Biden and Ukrainian gas firm Burisma.

Kyiv’s involvement in the 2016 U.S. election is outlined in an investigative report by Politico, titled “Ukrainian Efforts to Sabotage Trump Backfire.” Trump’s interest in Hunter Biden, meanwhile, stems in part from a recording in which Joe Biden brags about forcing the firing of a Ukrainian prosecutor by withholding $1 billion in U.S. loan guarantees from Ukraine. Prior to his firing, the prosecutor, Viktor Shokin, had seized the assets of the owner of Burisma.

At the same time, Hunter Biden received as much as $83,000 a month to serve on Burisma’s board of directors.

Trump’s attorneys argue that the president was well within his constitutional authority to inquire about election meddling and potential corruption.

“Uncovering potential foreign interference in U.S. elections is always a legitimate goal, whatever the source of the interference and whether or not it fits with Democrats’ preferred narrative about 2016,” the memorandum states. “It also would have been legitimate to mention the Biden–Burisma affair.”

Trump has repeatedly indicated that he would prefer a brief trial in the Senate.

He wrote on Twitter on Jan. 20 that he opposes calling former national security adviser John Bolton as a witness: “They didn’t want John Bolton and others in the House. They were in too much of a rush. Now they want them all in the Senate. Not supposed to be that way!”

Bolton indicated earlier this month that he would be willing to testify if he were subpoenaed.

Last week, the Government Accountability Office (GAO) decided that the White House broke the law by withholding aid to Ukraine; the GAO had issued similar decisions regarding the Obama White House on several occasions. The Trump White House released the funds without any announcement of investigations by Ukraine, shortly after House lawmakers launched a probe into the hold on funds.

Trump is scheduled to leave late Jan. 20 for Davos, Switzerland, to join global leaders at the World Economic Forum. As a result, he will be overseas on Jan. 21, when lawmakers will decide whether to admit witnesses and documents into the trial.

Should the trial proceed, the senators, who serve as the jury, will eventually vote to either acquit or remove the president. A 67-vote supermajority is required for removal. Republicans hold a 53–47 majority in the Senate. No Republican has indicated that he or she intends to vote to remove Trump.

No president has ever been removed as a direct result of impeachment. Andrew Johnson and Bill Clinton were impeached by the House but acquitted by the Senate. Richard Nixon resigned before an impeachment vote was taken.