Giffords Certain to Survive and holding her own, Says Doc

Gabrielle Giffords’ doctor said on Tuesday that her chances for survival are 100 percent and that it’s likely that “she’s not going to be in a vegetative state.” She’s currently breathing on her own and is “progressing as expected” with “no issues or problems.” She is not in a coma but is heavily sedated, and she still remains in critical condition.

It seems only fitting that Giffords’ eyes were filled with the sight of her husband urging her on the moment she was able to fully open them. And there’s no doubt he’ll be there as she makes her recovery, holding her hand, and remembering, perhaps, the inscription on the ring he slipped on her finger on their wedding day: 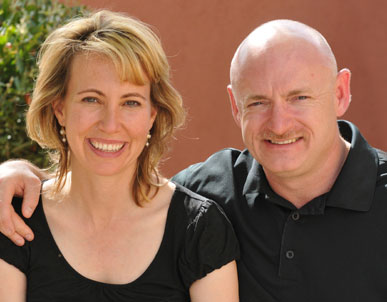 As a congresswoman married to an astronaut, Gabrielle Giffords is usually the one worrying about her spouse’s safety.

Her husband, Commander Mark E. Kelly, a Navy pilot and NASA astronaut, has been space traveling since 2001, and is slated to blast off once again later this spring to command STS 134 Endeavor, where he will rendezvous with his fellow astronaut and twin brother Scott. The penultimate scheduled shuttle of the NASA program is targeted for lift off April 1.

For Giffords, launch and re-entry are the most difficult parts of her husband’s trips. “You have to be strong and detach yourself from what could happen,” Giffords told me in an interview last fall about their unusual relationship. She described lift-off as “a combination of excitement and fear,” and an “awesome experience.”

For luck on his last voyage, she gave Kelly her wedding ring, which he had inscribed with the words, ”You’re the closest to heaven that I’ve ever been.”

The couple, who first met in China seven years ago, may have Washington’s most unique marriage. Since their wedding in 2007, they have yet to live in the same zip code. While he is based in Houston, she splits her time between Washington D.C. and Tucson. But wherever they are, they are in constant contact. Both carry Blackberrys, iPads, and iPhones and are “totally engaged” with what the other is doing, Kelly told me.

Launch and re-entry are the most difficult parts of her husband’s trips. “You have to be strong and detach yourself from what could happen,” Giffords told me last fall.

Their dialogue began when they met in China seven years ago at a conference aimed at strengthening relations between the U.S. and China. Kelly was married at the time, and Giffords was dating someone else. But after he divorced, the couple struck up an email and phone friendship. GIffords sometimes advised him on dating other women.

The couple had an unusual first date. In 2004, Giffords invited Kelly to come to Arizona for a tour of the state prison in Florence. She had been working on legislation relating to capital punishment—and she knew Kelly really wanted to sit in “the chair.”)

When she ran for Congress in 2005, he began showing up at her campaign stops. And Giffords was at the launch pad for the take off of his Discovery mission in 2006. They were married the next year at an organic farm in Amado, Arizona. “She had it all,” Kelly told The New York Times in 2007 in their wedding announcement. “Beautiful, smart, hard-working, balanced, fun to be with, and she laughed at my jokes.”

Because of their intense work schedules, the couple has never spent more than a few weeks at a time together. “It’s a unique situation, but it works well,” Kelly told me. Describing himself as “determined and resourceful” in getting where he wants to go, he commutes regularly to Tucson on weekends. “She has a more time-consuming job than I do. When she’s not working she’s asleep,” he observed.

Last fall, Kelly said he had yet to figure out his role as a political spouse, but believed he was “useful” on military and scientific issues and advised her on those areas. “I do think that’s somewhat helpful,” he said.

In interviewing both, I quickly grasped their commitment to their jobs and their devotion to each other. Kelly explained that before each space flight they exchange intimate letters that are ”very serious, honest, open, and straight from the heart.” Giffords always writes her spouse telling him how much she loves him and how proud she is of his achievements. She was talking about attending his launch in April when she confessed, “I’m always on pins and needles wondering, will this be the last conversation I am going to have with my husband?”