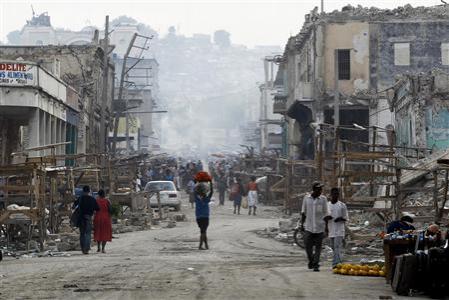 Reuters-When the ground shook Haiti on a Caribbean winter afternoon a year ago, toppling homes like cards and killing around 250,000 people, world leaders promised quick action to ease the human tragedy and rebuild the country.

A year on, the Western Hemisphere’s poorest country is still reeling from the earthquake, and the international community’s capacity to deliver and sustain aid effectively is being sorely tested.

The cold facts of one of the world’s biggest urban disasters make terrifying reading: at 16:53 local time on January 12, 2010, a magnitude 7.0 earthquake rattled the capital Port-au-Prince and surrounding regions. It only lasted 10-20 seconds but it killed around a quarter of a million, injured more than 300,000 and left more than 1.5 million homeless.

Despite billions of dollars of donations and aid pledges, a 12,000-strong United Nations peacekeeping presence and an army of U.N. and privately-funded relief workers, the debris that clogs much of the city and a million homeless people living in tents are blunt testimony to the unfinished recovery task.

Lofty promises at high-level diplomatic meetings to “build back better” ring hollow as Haiti marks the first anniversary of the quake this week, caught in the grip of a deadly cholera epidemic, a new political crisis and widespread pessimism over reconstruction plans that are barely off the ground.

The failures of the aid and recovery operations in a country less than two hours’ flying time from the United States, have called into question the world’s ability to deal with natural disasters of this magnitude.

In the run-up to the anniversary, some governments and many aid groups are raining a barrage of largely self-congratulatory details about their work in Haiti since the quake.

This jars with the view, expressed by many ordinary Haitians and a few aid groups, that a year into one of the world’s biggest humanitarian and reconstruction operations, there is little to show for so many promises.

Most Haitians are grateful for the solidarity shown around the world after the quake and the money already spent, but so much is wrong with Haiti that it’s difficult to be optimistic.

“When you go around the country and through the tents (in the survivors’ camps) and you look at the situation people are facing one year after the disaster, it’s hard to see much sign of how that money was spent,” said Mackenzy Jean-Francois, a 25-year-old university student in Port-au-Prince.

In almost every open space and hillside of the wounded city — in squares, outside the presidential palace, by the airport, in the main golf club, on slopes outside the capital — the faded, weather-beaten blue and white tents and tarpaulins of quake survivors are crammed higgledy-piggledy.

Collapsed and crumbling buildings, some wildly askew and many hiding bodies, still punctuate every street or hillside of the city. Piles of garbage and leaking sewage add to the chaos in many wrecked poor neighborhoods.

Haiti has suffered an unenviable list of woes in its 200-year history — hurricanes, floods, coups, massacres and uprisings that have killed tens of thousands, corrupt and cruel dictators who have become the stuff of literature, and even poverty-driven environmental desolation which has turned the country’s once forested hills into dusty, arid wastelands. 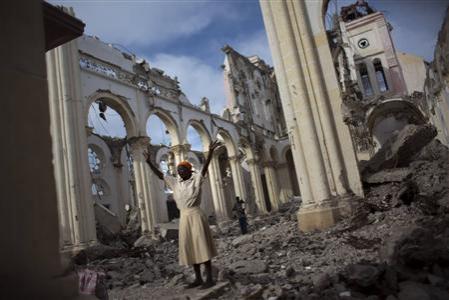 Criticism of the aid operation in the last year has come from a range of figures, including Hollywood actor turned humanitarian worker Sean Penn, and Cuba’s former leader Fidel Castro, who says Haiti has been “abandoned to its fate” by the world’s rich.

Even some prominent relief groups who have been active in Haiti over the last year are delivering scathing judgments.

In a hard-hitting report on January 6, the British charity Oxfam called Haiti’s post-quake recovery “at a standstill”.

Citing “a quagmire” of dithering and delay, it blamed lack of progress on “a crippling combination of Haitian government indecision, rich donor countries’ too frequent pursuit of their own aid priorities, and a lackluster Interim Haiti Recovery Commission” co-chaired by former U.S. President Bill Clinton.

The piqued commission said it was “absolutely floored” by the Oxfam criticism, which it called “blatantly inaccurate”.

The president of Doctors Without Borders/Medecins Sans Frontieres (MSF) International recently blasted what he called the “failure of the humanitarian relief system” to stem cholera epidemic deaths in Haiti, despite the presence of what he said was an estimated 12,000 private charities in the country.

“The aid community at large has failed to prevent unnecessary deaths in a population so tragically affected,” Unni Karunakara wrote in an op-ed piece.

The outbreak of cholera, which emerged in an area not affected by the quake and may even have been brought in by U.N. Nepalese peacekeepers, according to some experts — a charge the U.N. disputes — has already killed more than 3,600.

But other humanitarian actors view such judgments as either misconceived or not entirely fair.

“Maybe some people see a glass half empty, I see it half full,” said Pamela Cox, the World Bank’s vice president for Latin America and the Caribbean.

“I think the frustration with people in today’s world is they want a rapid fix … and … reconstruction is not a rapid process,” Cox told Reuters, although she said she understood the frustrations of aid groups working on the ground in Haiti.

Carleene Dei, who heads USAID operations here, staunchly defends U.S. relief efforts in the country and sees the criticism as “a problem of misperception”.

Dei says it is important to distinguish between the initial emergency response to help the injured and homeless, which she says went “very, very well”, and the much longer-term and far more complex reconstruction task.

Defenders of the emergency operation, which brought help from across the world, say it was able to deliver fast, massive and life-saving food and medical assistance to huge numbers of traumatized quake survivors.

The United Nations says around 4 million people received food assistance, emergency shelter materials were delivered to 1.5 million, safe water was distributed to more than a million, and a million more benefited from cash-for-work programs.