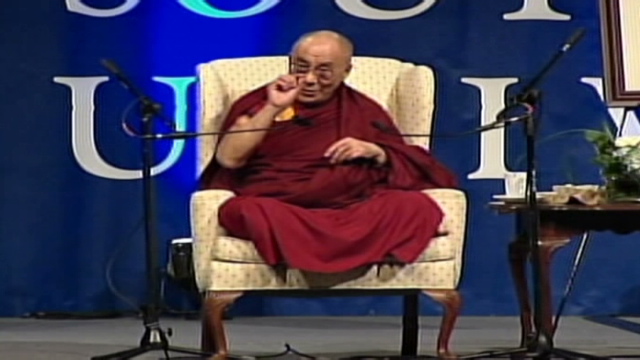 Tibetan lama cured his gangrene-stricken leg by meditating for a year. Now scientists are studying his brain, hoping to discover a medical miracle. Can the power of the mind help humans self-heal? That’s what a group of scientists are hoping to help determine by studying a Tibetan lama who believes he cured himself of gangrene through meditation.

When Tibetan Lama Phakyab Rinpoche immigrated to the United States in 2003, he was a 37-year-old refugee with diabetes and Pott’s Disease. His afflictions had gotten so bad that his right foot and leg had developed gangrene. He was hospitalized and examined by three different doctors in New York City who all gave the same treatment recommendation: amputate.

Few people would go against such medical advice, but Rinpoche (pronounced Rin-Poh-Chey) is no average person. Born in 1966 in Kham, Tibet, he was ordained at the age of 13 and named the Eighth Incarnation of the Phakyab Rinpoche by the Dalai Lama himself when he was working toward the highest level of Tibetan Buddhist study, the Geshe degree, in 1993. A deeply spiritual man who has devoted his life to the teachings of Buddhism, it was only natural that he should reach out to his mentor, His Holiness the Dalai Lama, when deciding whether to allow his leg to be cut off.

The Dalai Lama’s response was shocking: Do not amputate. Instead, Lama Rinpoche says, the Tibetan spiritual leader advised his protégé to utilize his virtuoso skills at Tsa Lung meditation—heal himself, and then teach others the value of the ancient tradition. He sent a letter prescribing additional mantras, such as the Hayagriva, which, at the outset of new endeavors, is said to clear obstacles and provide protection in their tradition. It was a decision that would require an incomprehensible leap of faith. But Rinpoche says there was no doubt within him.

Though doctors had made it clear he could die, he was not afraid. “As a Buddhist, what is the worst thing that could happen if I die?”  “I would be reborn again. But to lose a leg in one lifetime because I didn’t try to save it didn’t make sense.” And so he began to meditate. Rinpoche says he took no medicine and his diet was an ordinary one. He would break for meals—when the lama he was living with came home from work, they would have dinner and enjoy conversation—but then he would return to meditating before getting a good night’s sleep at the end of the day. In the morning, he would awake and return to his routine.


In the early days of this ritual, Lama Rinpoche remembers, the putrid ooze from his leg ran black; a few months later it turned cloudy, he said, and bruising started to appear. The swelling increased and it was more painful. The odor was sickening, he recalls. But still he felt no doubt. The progression of the degradation wasn’t simply halted—his leg was back from the dead. Then, after nine months, he says something began to happen that many Americans would consider a miracle.

The liquid leaking from his disabled leg began to run clear. The swelling went down. Soon he could put some weight on it. At ten months, he could walk again, first with crutches. A short time later he was down to one crutch, and then, before even a year had passed, he was walking on his own.

The progression of the degradation wasn’t simply halted—his leg was back from the dead. His diabetes and complicating Tuberculosis are gone today as well. Now, a group of doctors at New York University have begun studying Rinpoche—specifically, his brain.

Practitioners of Tsa Lung meditation like Rinpoche visualize a wind (or “lung,” or “prana”) that is one with the mind, moving down the center channel of their bodies, clearing blockages and impurities before moving on to ever-smaller channels. “This is a cognitive-behavioral practice that present East-West science suggests may be more effective that any existing strictly Western medical intervention,” says Dr. William C. Bushell, an MIT-affiliated researcher in medical anthropology and director of East-West Research for Tibet House in New York. Gangrene is not curable by current medical intervention once past a certain point in its progression, except by amputation.

This month, Dr. Bushell and NYU neuroscientist Zoran Josipovic, Ph.D. won Lama Rinpoche’s cooperation in undergoing a functional MRI scan of his brain while he meditated inside the scanner at NYU’s Center for Brain Imaging. In this first scan the Rinpoche participated in an ongoing study of the effects of different types of meditations on anti-correlated networks in the brain that Dr. Josipovic has been conducting at NYU. Bushell wrote a scientific analysis of the processes occurring in the same form of meditation used by Rinpoche in a letter to Joshua Lederberg, Nobel Prize winner in medicine, some 10 years ago. Dr. Lederberg was one of the giants of modern science, father of molecular biology, infectious disease medicine, and modern genetics. His foundation published the letter, which is actually an adaptation of a scientific paper, posthumously on his website.

It speaks of the mild to moderate hyperthermia resulting from the practice, which kills bacteria and aids the body in healing. “It is not entirely clear from a Western science perspective what the winds are, but the scientific evidence suggests to me and others that the meditative process involving winds includes increased local blood flow, metabolic activity, and oxygenation,’’ Bushell explains. “The original scientific model I developed (which is largely in a theoretical state) was based on, among other things, the pioneering work of Thomas K Hunt, MD, on the antibiotic properties of oxygenation in the blood and surrounding tissues, and was sponsored by the Institute of Noetic Sciences in Petaluma, Calif. Research shows that mental imagery directed to sites of the body, both superficial as well as deeper tissues, can with practice eventually lead to increased local blood flow, metabolic activity, and oxygenation.

Such increases could in principle combat even powerful bacteria such as Staphylococcus aureus, which not only can be the cause of gangrene, but is now often times resistant to antibiotics.” Dr. Bushell’s colleague Dr. Josipovic was also very curious about Rinpoche’s abilities and, in particular, about the way they may have affected the functional and structural organization of his brain. The early results of the test are significant at first glance, he says. They show changes in a wide network of brain areas mediating attention and awareness.

The team will publish their findings next year. “Over the past 10 years research into the effects of meditation on the brain has been gaining unprecedented public and scientific attention,” Dr. Josipovic explains. “What these studies have shown is that it is possible to optimize one’s life experience through cultivation of subtle cognitive states generated through meditation, and that these are accompanied by changes in the anatomical structure of the brain, or neuroplasticity. But what soon became evident was that a great variety of meditation techniques and states of consciousness they engender, pose a considerable challenge for understanding them in terms of the established constructs of Western science.” Dr. Josipovic says that a major new discovery in the field of neuroscience, that of spontaneously fluctuating resting-state networks in the brain, has the potential to shed some light on this issue.

“On a global level, the brain appears to be organized into two large-scale networks: extrinsic, or the task-positive network, composed of the brain areas that are active when we are focused on some task or external environment, and the intrinsic, or ‘default’ network, composed of the areas that are active when we reflect on ourselves and own experience.” These networks are usually anti-correlated in their activity—that is, when one is “up” the other is “down,” he says. “While this antagonism serves some healthy functions, for example, of allowing us to focus on a task and refrain from being distracted by daydreaming or irrelevant concerns, we suspect it may also underlie some unhealthy aspects of our everyday experience, such as excessive fragmentation between self/other and internal/external—in other words the ‘dualistic mind’ that many contemplative traditions see as the root of our suffering.’’

Those who wish to begin a Tsa Lung practice, which is an advanced but achievable discipline, are encouraged to seek a teacher. Rinpoche himself teaches often across the country, and is adding a website www.awakeningmindfoundation.org and Skype to his teaching sessions to reach more people around the world. This year he will lead a special New Year gathering in Tubac, Arizona sponsored by Pocket Sanctuary and the Helen Graham Park Foundation. MaryAnn Zitka, a medical researcher and senior student of Phakyab Rinpoche explains that the word Rinpoche is a Tibetan Buddhist honorific title that literally means the precious one. “This is a very appropriate title to me,” she says. “It’s not often that you meet someone so committed to helping others. Rinpoche freely teaches his wisdom traditions to all who wish to learn, and his only request is to practice.”

Maureen Seaberg is a NYC-based journalist whose work has appeared in the New York Times, the Daily News, Irish America, ESPN the magazine and on PBS and MSNBC. She won a scholarship to the inaugural Norman Mailer Writers Colony in 2009. She is also a synesthete and synesthesia researcher who is on the organizing committee of the Toward a Science of Consciousness Conference for the Center for Consciousness Studies at the University of Arizona, Tucson. Her first book, about synesthesia, titled Tasting the Universe, will be out in March 2011 from New Page Books.