Sarkozy has the Dollar on his mind 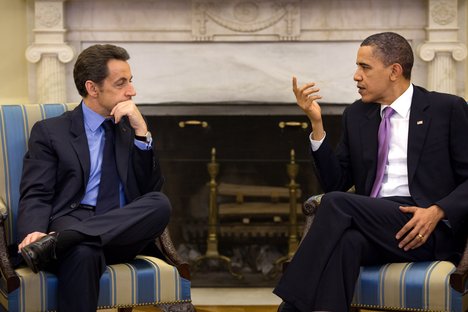 French President Nicolas Sarkozy plans on working to make some changes in the global financial system, and at a White House meeting on Monday he plans to press President Barack Obama to join him. France currently holds the presidency of the Group of Eight industrialized economies and the larger Group of 20 leading rich and developing nations; Sarkozy wants to lay out his priorities for the French tenure. He favors making the larger group the main body for global economic coordination. “Sarkozy thinks this is the best framework, and he wants to put an imprint on it,” said Daniel Hamilton, director of the Center for Transatlantic.

Speaking in the Oval Office alongside French President Nicolas Sarkozy, Obama said he looks forward to working with France to help frame the agenda for the upcoming G8 and G20 economic summits. France currently holds the presidency of both groups and will host the summits later this year.

Sarkozy says he recognizes the importance of the dollar to the global economy, but wants to work with the U.S. to address currency imbalances. Sarkozy thinks the global monetary system should not rely so heavily on the dollar as the world’s main reserve currency. He has not proposed specifics for an alternative future system.