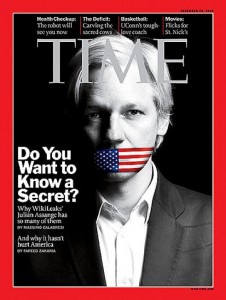 2010 has been a whirlwind of a year for WikiLeaks, the whistleblower website and its director

Little was known of WikiLeaks when it first opened operations in 2006, but the organization captured international attention in April this year when it released a 2007 video that showcased US brutality towards civilians and journalists in Iraq.

Later in July, WikiLeaks released 76,900 classified military documents about the US invasion of Afghanistan.

But not to be undone, in October the website released a package of almost 400,000 secret field reports from Iraq in conjunction with major media organizations across the globe.

Despite criticism from the US government that the release of documents undermined the security of its forces, WikiLeaks earned international acclaim for exposing state secrets and advancing transparency and freedom of expression.

Interest in WikiLeaks reached a crescendo when the website shifted its modus operandi by starting the slow leak of 250,000 US state department diplomatic cables in November 2010 that illustrated candid accounts of world leaders, political scenarios and secret dealings between nations.

The documents, released daily, in partnership with a host of international media organisations, presents unparalleled insights into the secret world of diplomatic exchange and has left diplomats around the world scrambling to deal with embarrassing consequences.

The latest approach — a painfully slow leak of classified information — captured the imagination of the world, seeing us all indulge in diplomatic gossip, blunt opinions and exchanges from those in the upper echelons of statehood, in addition to the the underhanded dealings of world governments.

Factor in revelations of multiple rape charges issued against Assange in Sweden, a warrant sanctioned by Interpol for his arrest, and talk of imminent extradition of a man involved in the publication of the most sensitive of government documents, and the WikiLeaks story turns into the stuff of a high-speed espionage thriller.

In response to the ambiguity over the legal issues around WikiLeaks’ operations, Amazon withdrew its servers as a host for the site and PayPal halted the transferal of independent funds that keeps WikiLeaks afloat; this new cyber war only turned WikiLeaks into a battleground for renewed debate on the limits to freedom of expression, the ambivalence of privacy in the internet age, and the future of diplomacy.

The promulgation of the sex scandal ushered in talk of political interference, and arguably deflected the focus from the leaked documents to Assange, the personality.

Despite the tangle the demonisation of Assange, seen until now as a prophet of liberty, and the continued release of classified files from WikiLeaks, form two analogous stories, which have dragged modern journalism to a precipice.

So, as a move away from the occasional leaked document, reporting on press conferences and working from press releases, will WikiLeaks shift the standards of journalism? Moreover, will WikiLeaks usher in more control over the internet, when it was precisely the control of information that it sought to undermine? Are we in the midst of the first information war?

It was only natural that WikiLeaks makes the top newsmaker of 2010.