Obama thinks that the rise of India will be good for American jobs. There is another side to the story 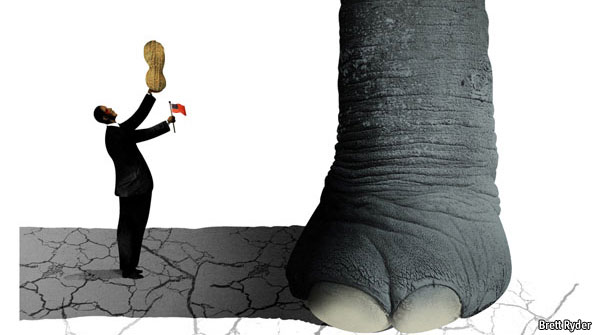 On November 5th Mr Obama, fresh from his humiliation in the mid-term elections, flies to India accompanied by an entourage of almost 250 businesspeople. His message for the folks back home will be that India could be a goldmine for American jobs. And he will clinch a succession of huge business deals with India—not least a $5.8 billion aircraft sale by Boeing.

Mr Obama’s win-win rhetoric is plausible enough. India is growing at about 8% a year at a time when America can barely manage 2%. It is also set to add 240m people to its working population by 2030. And America produces all sorts of things that Indians crave, from iPads to MBAs to fighter planes.

Yet the rise of new economic powers always brings problems as well as opportunities for incumbents. New companies displace old ones. New business models disrupt established ones. Comfortable workers in the rich world are forced to compete with hungrier ones in the poor world.

India is producing a legion of new global giants that are competing head-to-head with established American companies. Look at Arcelor Mittal and Tata Steel in steelmaking; Bharat Forge and Sundram Fasteners in car parts; Hindalco in aluminium rolling; and a host of companies, including Infosys, Tata Consulting Services (TCS), Cognizant and HCL Technologies, in information services. Twenty years ago India had no global companies worth mentioning. Today the Tata group earns 60% of its revenues abroad, and Indian companies ranging from natural-resource firms, such as Reliance Industries, to health-care companies, such as Pirmal Healthcare, have been snapping up American brands.

American companies are also setting up shop in India. Bangalore and Hyderabad have “electronic cities” crowded with America’s leading companies. In Bangalore Cisco spent $1 billion on its Globalisation Centre East and General Electric (GE) opened a swanky research centre. IBM employs more people in India than in the United States.

For American workers the most worrying thing about all this is the flight of brain-intensive jobs to India. Americans reconciled themselves to the loss of manufacturing jobs with the thought that they would keep the smart jobs. But they reckoned without two things: the power of the internet and the hunger of emerging-market companies.

India has long since turned itself into the world’s back-office—subjecting paper-processing hubs such as Kansas City to the same forces of competition that devastated former industrial cities such as Gary, Indiana. Now Indian-based companies are moving into an wider range of services: reading CT-scans and X-rays, processing legal documents and helping with animation. They are also moving into sophisticated niches. TCS and Infosys compete directly with IBM and Accenture in consulting. American companies are adding to the trend by moving more of their important operations to India: John Chambers, Cisco’s boss, has decreed that 20% of the firm’s leadership should be in Bangalore.

Most strikingly, Indian companies have produced a new type of innovation, variously dubbed “frugal”, “reverse” and “Gandhian”. The essence is to reduce the price of a product or service by a breathtaking amount—80% rather than 10%—by removing unnecessary bells and whistles. Tata Motors is selling its “people’s car” for $3,000; GE’s Indian arm offers a medical ECG machine for $400; Bharat Biotech sells a single dose of its hepatitis B vaccine for 20 cents and Bharti Airtel provides one of the cheapest wireless telephone services in the world. These frugal products are likely to disrupt established Western companies (including GE itself) by forcing them to engage in a bloody price war.

To add to this general turbulence Indian-based companies are also on a hiring binge. For decades America has gorged itself on a seemingly limitless supply of brilliant Indian PhD students and entrepreneurs. Half of Silicon Valley’s start-ups were either founded or co-founded by Indians. But these paragons are now returning en masse to the mother country (just as America makes life more difficult for immigrants). Why work for a sluggardly American firm when Infosys is growing at double digits? Why live in a flimsy bungalow in the Valley when an Indian company will provide you with a villa in a gated community, membership of a country club and a chauffeur-driven car?

There is an upside to these downsides. Frugal products will be a godsend for America’s pinched consumers. They may even prevent the American economy from being crushed by the health-care Godzilla. But Americans need to get back on the treadmill. In a recent speech Mr Obama told schoolchildren in Philadelphia that: “When students around the world in Bangalore or Beijing are working harder than ever, and doing better than ever, your success in school is not just going to determine your success, it is going to determine America’s success in the 21st century.” That is not a bad theme for the next two years of his presidency.