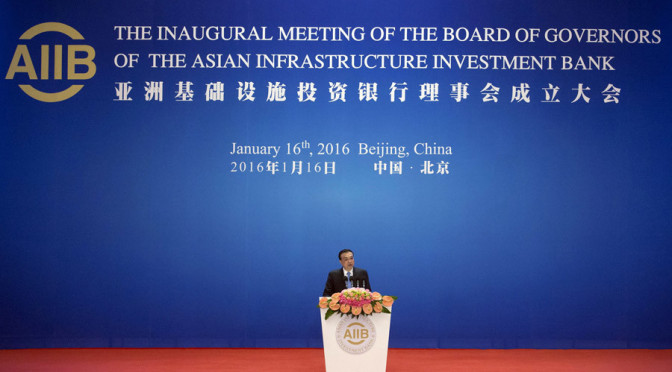 The new global development bank is now online and is ready to serve governments of the world. This is the official inauguration of the new financial system that will usher in a new era of massive economic development for humanity.

We shall remember this day as the time when real men stood their ground and did what they believed was right for the people.

The Board of Governors of the Asian Infrastructure Investment Bank (AIIB) has held its inaugural meeting, declaring the bank open for business and electing its first president, Jin Liqun.

Chinese president Xi Jinping, as well as Prime Minister Li Keqiang, delivered opening addresses at the official ceremony, which was also attended by high officials from other multilateral banks.

Premier Li Keqiang said that Asia needs investment in infrastructure and connectivity to remain the most dynamic region for global growth.

One of the main decisions made on Saturday was the selection of AIIB’s president. Jin Liqun, who has served as AIIB’s President-designate since September 1, 2015, was elected to that position.

“AIIB is now ready to join the family of multilateral financial institutions, investing in sustainable infrastructure for the improvement of lives across Asia,” Liqun said in his first statement as president.

The AIIB was established as a new multilateral financial institution aimed at providing “financial support for infrastructure development and regional connectivity in Asia.” It was founded in October, 2014, and will have its headquarters in Beijing. Its goals are also to boost economic development in the region, create wealth, prove infrastructure, and promote regional cooperation and partnership.

Luxembourg Finance Minister Pierre Gramegna sees the establishment of the bank as “further proof of the rebalancing of the world economy.”

The value of AIIB’s authorized capital amounts to $100 billion, with almost $30 billion invested by China. The bank, which unites 57 member states, expects to lend $10 billion to $15 billion a year for the first five years of its operations, beginning in the second quarter of 2016.

One more development bank with significant Chinese participation is the New Development Bank (NDB), also known as BRICS Development Bank, which was established last year. Russian officials believe that, despite the fact that the banks share similar goals, they will complement each other rather than compete.

“I think there is enough room for everybody. Our economy is so underinvested…So, the Asian bank, BRICS and other banks will have a field for investment,” Russian Minister of Economic Development Aleksey Ulyukayev said last summer.

What would prevent the Dragon Family from enhancing the funding of the AIIB to enable it to serve more people, as they have been silently funding the government of Taiwan for decades?

Long-time followers of this site are already exposed to the covert plan to defeat the Nazionist Crime Syndicate, now recognized specifically as the Khazarian Mafia, that’s been ruling the planet through fractional banking and rigged financial institutions, systematic hijacking of the mainstream media and its usurpation of the academia, and through the outright poisoning and genetic manipulations of our food systems, and the effective weaponization of the entire healthcare infrastructure.

They have also misused weather science and technology against smaller countries for purposes of extortion and economic plunder.

Our experience and understanding about all of these covert and sinister operations have inflicted us with a New World Order phobia to the point that even every move of the Reformist Collective is also held suspect. But is there really no hope for mankind on this planet anymore?

Are there no benevolent souls out there that will selflessly respond to the people’s call of respite from such oppression and outright attempts for global annihilation?

It appears that there’s still some progressive minds left that have banded together in a collective wisdom to stop the mayhem and planetary destruction by unleashing a wave of life changing, paradigm shifting technologies which may nurture life rather than defeat it.

The moment has arrived when, at least fifty of the Old Kingdoms of the Pacific and the East are all in agreement to use these suppressed scientific knowledge now for humanity to partake upon, and that which we truly deserve, i.e. the fruits of our own labor.

The Russians have never given up on their energy reserves to the Khazarian Mafia in spite of all the provocations and sanctions, and the use of economic hitmen in the past.

Iran did not allow the entry of Rothschild bankers into their economy, but instead hanged those who tried to sabotage their national banking system.

China successfully used its massive labor force as a potent weapon to suck in Western technologies and destroyed the industrial backbone of the Khazarian Empire.

The massive exposure of Western companies in China has enabled the latter to literally control the former’s economy at the press of a button. China is now in an enviable position to play in the global economy as it deems fit. But even with this immense economic power, she chooses to crash the whole fiat financial empire rather gradually.

Japan has also decided to hold talks aimed at reestablishing peaceful and productive relations with Russia. When agreements between the two parties are consummated, the total erosion of Khazarian influence in Asia is perfected.

“We need the constructive engagement of Russia,” Abe said in an interview with the Financial Times newspaper published Sunday, pointing to the war in Syria, tense relations between Saudi Arabia and Iran and the threat posed by radical Islamism.

Japan this year chairs the Group of Seven advanced economies group and is set to host a G7 summit in May. Abe told the Financial Times he was considering going to Moscow or inviting Russian President Vladimir Putin to Tokyo in his function as G7 chair.

The covert geopolitical war is just starting to surface into the mainstream consciousness, as the once Covert World War 3 is occasionally leaking.into the open in the form of kinetic attacks in Tianjin China [here], the deliberate shooting down of one Su-24 in Syria [here], or with the most recent “drifting” of the US Navy Seals close to Farsi Islands, Iran [here].

The Usurpers of the World will soon find themselves exceptionally shamed and punished. Their massive defeats in Syria and Iran are only the beginning.

Following is a very good summary of where we’ve been, where we are now, and where we will be in the near future, if we so choose to take the necessary action to inform others of what’s truly happening behind this Grand Facade, not to render them all passive, but to inspire them to act; that they may seek to abandon the system-induced fear and from so much despair they shall set themselves free.

In the end, Evil will be defeated because Good Men decided to do something, nay, gave their everything.

The Eastern Sun is dawning.