Syria was furious with Maliki for what happened in the summer of 2009. 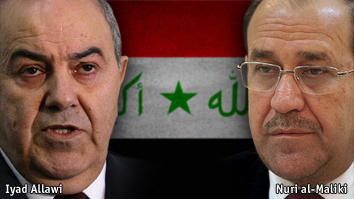 After a 14-month absence, Iraqi Prime Minister Nuri al-Maliki returned to Damascus on Wednesday, turning a page with the Syrians after he provoked a diplomatic crisis with them last August.

The former Damascus resident, hours after returning from a similar visit to that capital, accused the country of harboring Iraqi Ba’athists that allegedly carried out a triple bombing in Baghdad that killed over 100 civilians. The Iraqi ambassador was quickly withdrawn from Damascus – only to return last Sunday, three days ahead of Maliki’s visit.

For weeks, positive gestures have been exchanged between Damascus and Baghdad, and Maliki’s visit was an expected ulmination of the warming relations.

The rapprochement begun with a visit by Maliki’s government spokesman Ali al-Dabbagh in August, and was followed by a phone conversation between Maliki and his Syrian counterpart, Prime Minister Naji al-Ahmed, in September. A senior delegation from Maliki’s State of Law Coalition (SoL) then went to Damascus, followed by the return of Iraq’s ambassador on October 10.

Maliki’s visit to Syria comes amid a prolonged political crisis in Iraq that has lasted since its March election. Many believed that Syria and Saudi Arabia would ensure that Maliki was replaced with former premier Iyad Allawi, who had won a majority of 91 seats in parliament in the vote. However, neither Allawi nor Maliki have since been able to form a majority and end the stalemate.

Allawi is strongly allied to the Sunnis and preaches a secular agenda that differs greatly from the religious path Maliki has drawn since he became prime minister in 2006. The Saudis saw Maliki as a sectarian politician bent on empowering Shi’ites at the expense of Sunnis, while Syria was furious with Maliki for what happened in the summer of 2009.

Disappointed with Maliki, Syria saw him as an ungrateful neighbor who had blamed Syria for those infamous bombings to cover up for his own faults in managing Iraq’s security.

The Syrians had hosted Maliki in Damascus for more than 10 years, adamantly refusing to extradite him during the Saddam Hussein era. When he became prime minister a Syrian embassy was opened in Baghdad, helping legitimize Maliki in the eyes of ordinary Iraqis – especially Sunnis. This also helped promote him in Arab circles, where he was seen as a creation of the Iranians. Taking his cue from the Middle East neighborhood that was seemingly very hostile to Maliki, Allawi invested in a relationship with the Syrians and Saudis.

By September, however, Arab capitals had reasoned that Allawi would never make it to the premiership, regardless of how many seats he commanded in parliament. Simply put, he could not form a cabinet on his own – needing a total of 163 seats – which his Iraqi National List did not have.

Coinciding with this shift in Baghdad were several back-to-back visits by Iraqi players to Damascus, including Vice President Tarek al-Hashemi, Shi’ite cleric Muqtada al-Sadr, Ammar al-Hakim of the Supreme Iraqi Islamic Council (SIIC), and Allawi, who was in Syria two weeks before Maliki’s visit.

The Syrians made it clear to all their visitors – Maliki included – that they would not interfere at a micro-level in Iraqi politics, stressing nevertheless that any government needed to include all parties, Shi’ites, Sunnis and Kurds.

The Sunnis and Kurds have to date been reluctant to support Maliki’s bid for office
, for different reasons. The Sunnis did not trust Maliki, who had reneged on all promises made to them in 2006. He has not issued a political amnesty to set thousands of Sunnis free, done nothing about repealing the infamous de-Ba’athification laws that were passed in 2003, and repeatedly failed to disarm Shi’ite militias.

He persecuted armed Sunni tribesmen, known as the Awakening Councils, and refused to empower Sunnis within the government. When they collectively walked out on him in 2007, he did not lift a finger to appease them. Only Syria can talk them into a change of attitude today, Maliki has reasoned, offering to grant concessions that he had repeatedly refused since 2006.

Syria has the ear of influential Sunnis – tribesmen, notables and former Ba’athists – and can talk them into a u-turn if Maliki agrees to give them proper representation in any new government. He would also need to issue the general amnesty, revoke the anti-Ba’athification laws, and take serious action against armed militias, be they Sunni or Shi’ite.

Maliki appears to have reasoned that it was foolish – to say the least – to cross the Syrians over a matter that did not concern them. After all, the August bombings were followed by similar horrific attacks in October and December 2009, proving that the root of the problem was security in Iraq itself, and not Iraqi fugitives living in neighboring Syria.

By blaming it on the Syrians, Maliki actually enabled the real culprits – al-Qaeda – to repeat the same terrorist stunt within a four-month interval. The group reasoned, having got away with it in August, that Maliki would be incapable to stop them as this would entail admitting that security was completely lacking in Iraq.

Maliki also reasoned that just like having a Syrian ambassador in Baghdad did wonders to his image in the eyes of Sunnis, withdrawing him in 2009 had the exact opposite effect. Legitimacy granted – legitimacy withdrawn – is how Maliki viewed his diplomatic row with Damascus.

It was one thing to be recognized by a pro-Western country like Jordan, for example, but something completely different when this legitimacy is granted by a country like Syria that still preaches a strong brand of Arab nationalism and continues to champion the Palestinian cause.

Shortly before the Maliki visit, Allawi seemingly threw in the towel, agreeing to support a different candidate for the premiership – Adel Abdul Mehdi of the SIIC. Allawi’s chances of becoming prime minister, amid the new mood in the Arab neighborhood and within Iraq itself, have seemingly shrunk to very low levels.

Maliki has offered him a seemingly perfect exit strategy – the post of speaker of parliament in exchange for supporting Maliki’s bid for another term. With Syria willing to give Maliki the benefit of the doubt for another round in office
, several of Syria’s allies in Iraq are likely to follow suit, including Sunnis, Kurds and Muqtada.

Maliki has to live up to this new deal by seriously engaging all parties in the cabinet formation, making sure not to repeat the mistakes of 2006-2008. If not, he risks losing Syrian support all over again.