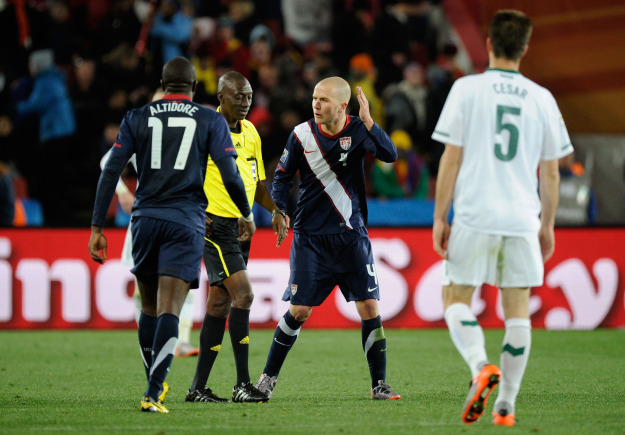 ALL`S FAIR IN LOVE AND SOCCER

Soccer-phobic Americans may feel more justified in their skepticism this week after watching a victory against Slovenia snatched away by referee Koman Coulibaly’s dubious foul call against U.S. midfielder Maurice Edu. Why bother watching a sport, they might think, where a seemingly arbitrary calls by referees determine the outcome of games, officials are notoriously corrupt, and players routinely disregard rules and fake injuries. This is missing the point. Strange as it might seem, rule bending is an integral part of international soccer. Everyone cheats, and there’s a lot to be learned and enjoyed from how each team does it.

Henry Kissinger famously wrote that national soccer teams reflect what political scientists used to call “national character.” It’s great fodder for a barroom debate, but if Kissinger wanted to pass academic muster, he’d have to track down measurable data. It’s not so easy to correlate ball handling with political engagement or goalkeeping with patriotism, but there is one element of national character where there’s measurable data and an easy soccer analog: corruption.

There are all sorts of measures of political and social corruption, including Transparency International’s famous annual index. And world soccer has more than its share of corruption-related headlines: recent months have seen criminal investigations into soccer corruption in Germany and league-wide corruption scandals in Italy. And, of course, every single soccer match is replete with examples of players bending and breaking the rules. A comparison shows that fans are right to give credence to some of the less savory national stereotypes — but they should also probably show more composure when confronted with bad behavior on the pitch.

Given national stereotypes and corruption statistics, we would expect South American and southern European soccer teams to be more prone to corruption and cheating in soccer. And, indeed, Argentineans and Italians, players and fans alike, have been known to embrace deception on the field — at the least, they prefer to push the limits of what they can get away with when the referee isn’t looking. 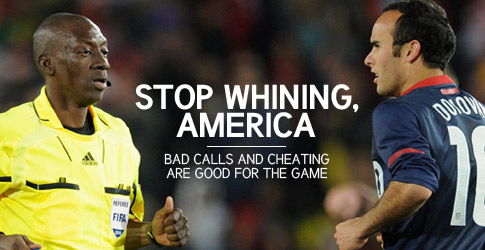 Fans and players in these countries tend to be nonchalant about time-wasting, clever tricks, and dissimulation — like diving in the penalty box to attract a penalty kick — accepting them as “part of the game.” In South America, soccer fans admire precisely the very tactics (for instance, the pulling of shirts and tugging on shoulders during corner kicks that are near impossible for referees to spot) universally condemned by soccer’s rule enforcers. It is no coincidence that Lucio, Maicon, and Samuel — the most notoriously sneaky stars of this year’s Champions League victors, Inter Milan (note: an Italian team) — hail from Brazil and Argentina. These are countries with a long tradition of El Gueguense, the game of deceiving colonizers. The rules of the game are simple: never tell a lie, but never tell the whole truth.

Latin America’s nonchalance toward rule-breaking was pivotal in one of the World Cup’s defining moments in 1986. When Argentinean superstar Diego Maradona used his hand to punch in an infamous goal against England on the way to winning the championship, few Argentineans felt compelled to express remorse. Instead, Maradona brashly claimed that the “hand of God” had intervened in the goal.

Other countries might take the rules more seriously, which certainly isn’t to say that they always follow them. France is only in this year’s World Cup because French striker Thierry Henry handled the ball twice on a late goal in a play-off game against Ireland. After the game, Henry confessed sheepishly to his crime, but the Irish press felt justified in vilifying him as an unrepentant cheater for not immediately alerting the referee, when it might still have made a difference.

Britain and Germany also have very low tolerance for such shenanigans. This attitude may also have its roots in historical political practices: Sportsmanship, like Christianity, was a major component of the ethic Europe used to justify its colonization of far-flung territory. There are exceptions, of course, to the link between social corruption and sporting malfeasance. Judging from the rampant stories of corruption recently in the U.S. headlines — from Jack Abramoff’s political lobbying, to Goldman Sachs’ alleged malfeasance — we should probably expect U.S. players to be diving in the box, stalling for time, pulling at shirts, and committing tactical fouls. But, in fact, America’s professional soccer league, Major League Soccer, has been very stringent about enforcing the soccer rule book.

And of course, as the United States learned in the Slovenia game, soccer refereeing is as much an art as a science. Refereeing styles, too, can reflect national character. For instance, Northern European referees often feel they have a mandate to prevent infractions and keep tight control over the game; they also don’t shy from demanding the respect of the much more highly paid athletes around them. Latin referees, meanwhile, are more inclined to allow the flow of the game to proceed. And in Italy, where referee-bribing scandals have plagued the national leagues in recent years, fans have entirely lost confidence in the independence and trustworthiness of their soccer officials. Even when Italian referees call obvious fouls to prevent injury risks to players, fans complain and impugn their integrity and newscasters second-guess their calls ad nauseum on post-game shows. (Disgruntled American fans can read what they will into the fact that Coulibaly’s home country, Mali, is tied for a not-exactly-stellar 111th place on Transparency International’s index.)

Scholars of the soccer ball often point to differences in on-the-field styles as being reflective of countries’ varying economic structures. The high inequality and lack of state welfare protections in Latin America means that the lower classes individually have to learn to be crafty to survive economically. This street-wise ability “to get away with it” is a widely admired economic skill in Brazil. (Rightly so, according to some scholars: studies show that in countries with unreliable business practices and low incomes, bribery can be an important way of keeping an economy moving.) By contrast, in England or Germany, countries with strong traditions of labor unions, players and fans learn that what counts on the field is the team’s collective efforts, just as it always has in the workplace. These are stereotypes, to be sure, but not so egregious as to be summarily dismissed.

And while no one likes it when their team is the victim of a bad call, the dissimulation on the soccer field may not be all that bad for the game. What, really, is the difference between cheering the guile of a fantastic dribbling and admiring the crafty deception of eliciting the call of a non-existent foul? The goal in soccer, after all, is to win the game, and one way to do that is to influence the referees, who like government regulators, have a crucial and difficult job and are themselves flawed human beings. In a sport that relies on only one person to police the actions of 22 players over the course of 90 minutes — and often longer — it’s not surprising that a few calls get missed, or called incorrectly. Moreover, it’s not unreasonable to think that Coulibaly’s controversial call, and the ensuing uproar in the U.S. media, might do more to get Americans to pay attention to the World Cup than a by-the-book 3-2 victory over Slovenia ever would.

So, instead of moralizing about corruption or incompetence when we see it in a sports competition, we would be better off sitting back and enjoying the “hand of God” in action.