Most people go on holiday to escape. They pick a far away destination in the assumption that the further away they are from home, the more rewarding and freeing the trip will be.” ~ Matthew Dawn

Sticker shock. Expect to pay a lot. Hellishly hot in the summer and shockingly less sexy than advertised.
But the city and local people, called Cariocas, are clean and the crime is greatly exaggerated. The Cidade Marvilhosa, or Marvelous City, is a must-see for spendy types, budget travelers and even bucket listers.

Spendy in every way possible, especially during the summer months of December, January and February and certainly during World Cup. Rio de Janeiro is one of the most expensive cities in the world, experiencing a real estate bubble. I lived there recently for 100 days and sampled Airbnb quarters, hostels, hillside camping and a small, furnished apartment. Certainly a feast for the eyes, wherever you go, as this photo of Friday evening in Ipanema shows. 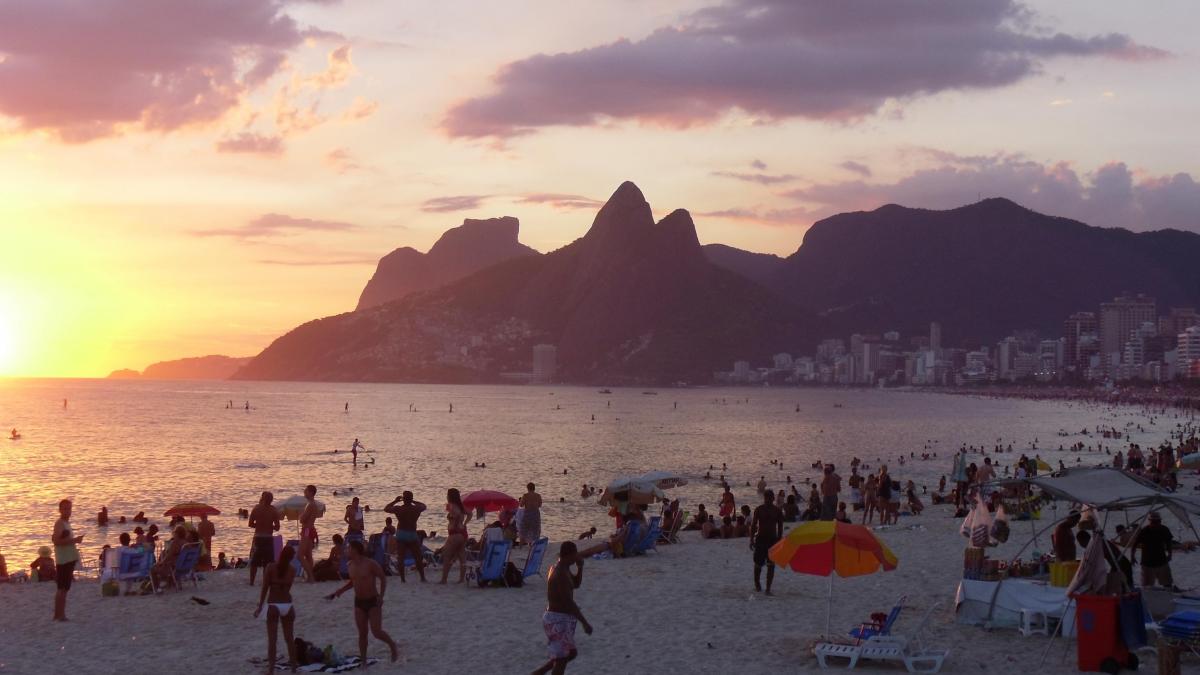 Long ago a movie director shot an amazing film atop one of those hillsides, right there in nearby Copacabana. The movie won an Oscar. Few Cariocas I talked to ever heard of the film (“Black Orpheus”), but I explored the foundations of the movie set high upon Morro da Babilonia. Well worth the hike, on an early Sunday morning to see the sun rise over the ocean. The sun rises across the mouth of the bay, just like it did in the movie. And the joys and sorrows portrayed in the movie are exactly the same, but magnified many times over.

The Marvelous City is amazing in many ways. But if you look closely, you see the same old corruption and thuggery, the same painful poverty and injustice, that plague many states. The beaches, the warm ocean breezes, the pretty girls in their bikinis distract the onlooker, tourist and native alike.

One moment you catch a glimpse of a pair of beautiful girls from Ipanema and, not 20 feet away, a pair of heavily armed Policia Militar guarding the sunseekers from groups of predators swift, daring and opportunistic. The police are hired from the same class of people as those they guard. Brazilians are approachable and know exactly what is going on, but seem uncertain how to change things. Does that remind you of any other country? 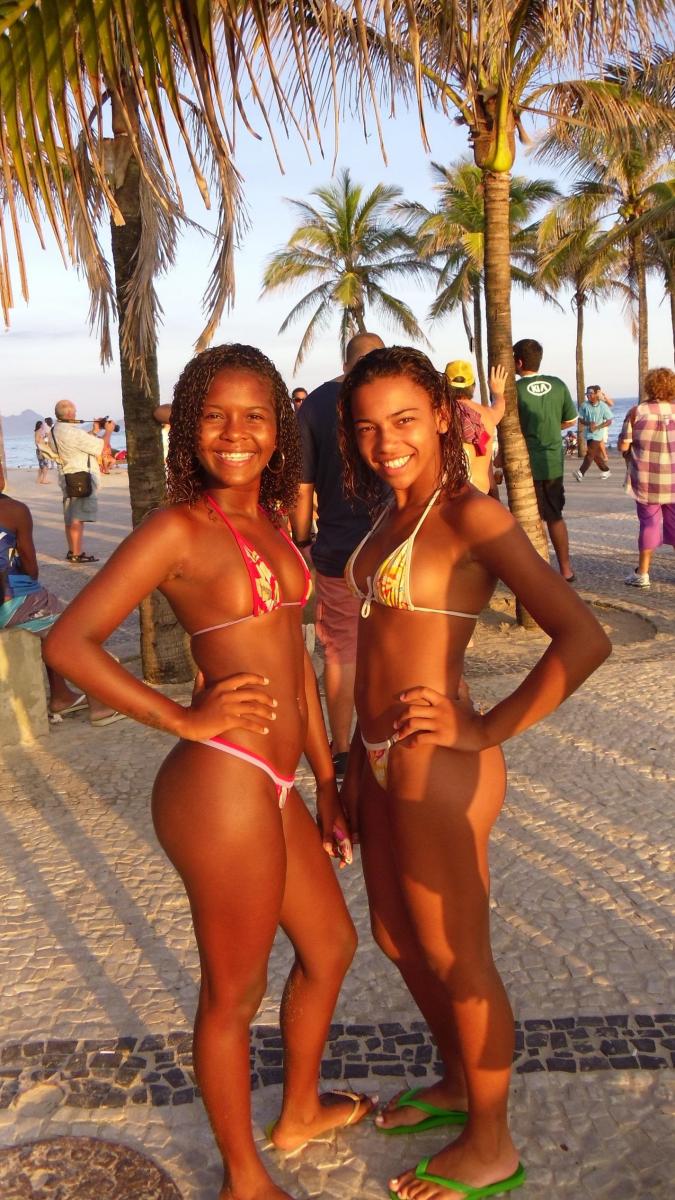 The marauding thieves that struck the beaches simply mirrored the behavior of their leaders. But street thieves suffer far more severe punishment if caught. While I lived there in Rio, the beaches of Copacabana and Ipanema witnessed wilding events usually seen here during Black Friday or the introduction of a new Air Jordan. The mayor and governor of Rio simply hired more cops.

One hundred fifty demonstrators recently made major news when they demonstrated in Sao Paulo—a transportation strike. The media didn’t add that more than 12 million people live in Sao Paulo. On any given night, more than 1,500 prostitutes show up to ply their wares in the Red Light district. When 15,000 or 150,000 or 15 million angry and determined people show up in force, things might change.

Brazil is like a sub-tropical USA. Filled with dispossessed, with the few wealthy elites protected by armed Policia Militar and easily-bribed local police, Brazil still retains a sort of modern, banana republic feel. Just like here in the USA.

Did I feel safe there? Probably I felt safer walking around in the slums of Rio than walking around in Chicago. I walked around alone at night in many central Rio neighborhoods, one old and slow gringo, and rarely saw a cop. The cops are stationed in Zona Sul, where the rich people live, and where bribes are openly paid. 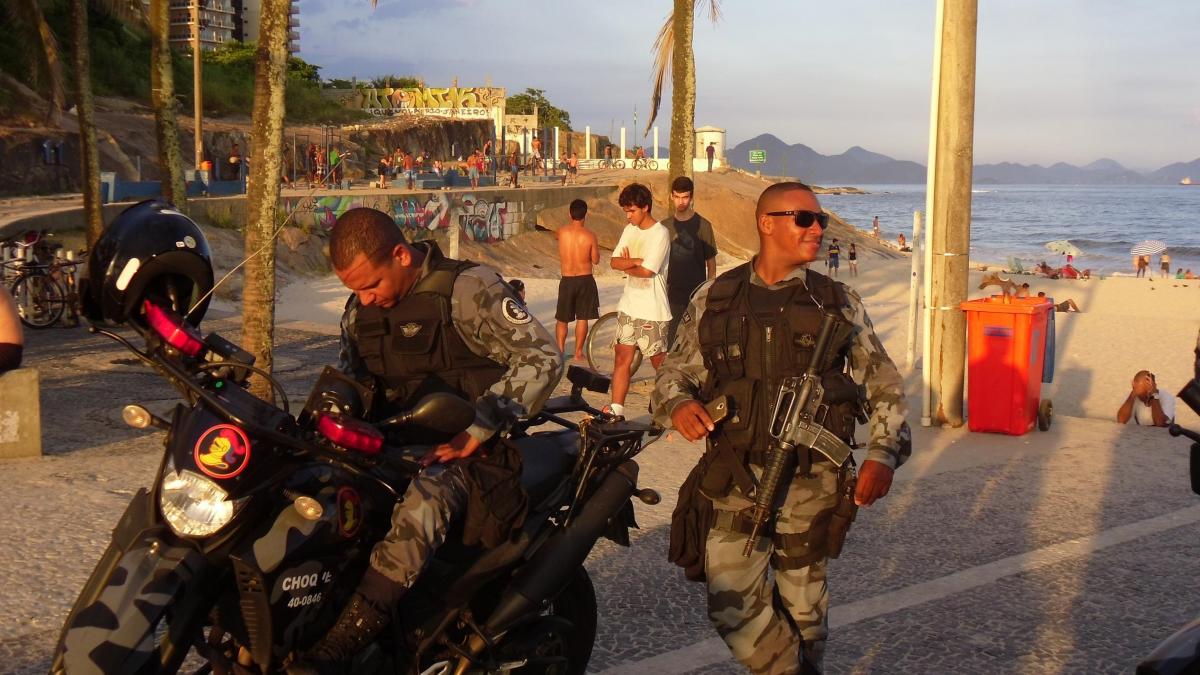 Imagine flying into Rio from some northern city enduring a bout of polar vortex. Late December or January, you catch a plane from Boston, New York or Buffalo in below zero temperature. You get off the plane in Rio. Outside on the curb, awaiting a taxi, with the heat and humidity, you realize there might be a hundred degree difference.

Now imagine a room without air conditioning. I slept in the largest 16-bed dorm of Rio Nature because the windows were large and the overhead fans whirled continuously. The same day that polar vortex arrived over New England, I remember taking eight cold showers in a 24-hour period. Each lasted no more than a minute, but the cool water felt heavenly.

Surrounded by wilderness, flowering trees, birds and small animals, Rio Nature had a rustic charm. Like a forgotten hillside hippie haven in Botafogo. Beds rented for R$28 per night, or around US$13, and included a continental breakfast and more monkeys than people attending breakfast on the veranda. The monkeys preferred sliced bananas, FYI.

According to Elliot Rosenberg, you can rent a nice place for a month in a hillside favela for the price of a single night in nearby Ipanema. Elliot makes a good pitch in his “7 Reasons to Live in a Favela.” The largest and most picturesque shantytowns in Rio, Rochinha or Vidigal, with sweeping seaside views, might be a good choice for those on a budget. Live in a small studio and immerse into the Carioca culture for a month or three.

Few gringos visited Rio while I was there. I met a handful of Americans in 100 days. The World Cup will be broadcast to billions worldwide. The world will see a slice of life, in between the incessant ads, of Brazil and Brazilians.

But What About Those Brazilian Prostitutes?

Brazilian prostitutes, called programas, frequent the bars and brothels of Copacabana and Ipanema as well as Central Rio. Probably the best known is the Balcony Bar in Copacabana. On warm weekend nights during the summer months of December, January and February, the bar is an ever-shifting fashion show of sensual styles. A wide variety of gringos from many nations peruse and choose, and World Cup will be no different.

Mostly older guys but some younger fellows, wide-eyed with the trepidation only the sexual hunt can cause. Hard to call them hunter and hunted. More exact to call everyone here prey, all of us hungry for a peculiar desire or needful thing that consumes everyone if not careful. Naturally the police were always nearby to protect and serve the commerce. Prices in the summer of 2014 at the Balcony? Between 250 and 300 Reals. One US dollar exchanged for 2.35 Brazilian Real while I lived in Rio recently. So 235 Reals equals US$100, more or less. The plural of Real is Reis, pronounced “hey-ice” but I prefer to use Reals here although not really correct.

According to reporter Julie Ruvolo, Rio’s multitude of sex establishments all stay open at the discretion of the government. All of them pay a price, or bribe, to officials to remain open. “We all know that certain police officials get a handsome chunk of change from the high-end termas (sauna) as silent partners,” says sex researcher Thaddeus Blanchette. “At the Monte Carlo brothel, they went in at the precise moment that a local top official was there, presumably to pick up the cash.”

Combination massage parlor, steam bath, bar and brothel, the Monte Carlo occupies a couple floors in a nondescript building adjacent to the Oceano Copacabana Hotel on Hilario de Gouveia. Lots of glass and polished stone inside the club. Alessandra the receptionist speaks fluent English. Costs 90 Reals to enter, or about US$40. Girls start at 200 Reals for 40 minutes or 400 for an hour. About US$175 US for an hour, which seemed kind of spendy for fleeting pleasure, but the price would be even higher during World Cup.

According to a woman I spoke with, who worked there for many months, the girls gets to keep all the money they earn. No pimps but girls are fined 200 Reals if they miss a shift. A massage costs 70-80 Reals and doesn’t include sex. I asked Alessandra if the masseuse provided sex upon request and was told no. I didn’t stick around to find out because Copacabana beach beckoned two blocks away.

One evening a friend took me to a red light area, far from the trendy beaches. We caught a bus and then walked through some foreboding streets few gringos ever see. The “City of Girls” is located along Sotero dos Reis, and the street resembled a movie set for Road Warrior IV. Yet we were only a mile or two from historic Maracana Stadium, home to the World Cup.

Unless you chose to live in Brazil and invest your body and soul in the place, perhaps as an English language professor, you will probably end up paying for your pleasure. Sometimes your fantasies are fulfilled but you will always, one way or the other, pay a steep price.

Rio is very expensive now. Times have changed. Brazil is part of the emerging BRICS nations. Gas is about $4 a gallon and a new car costs about twice what a similar model would in America. The new Ducati 1200 CC motorcycle here is priced at 105,000 Reis, or US$45,000. Stateside MSRP on that same Ducati is less than 15 grand.

The simplest things here, from bottles of sunscreen to lawn chairs to tickets to major events like the World Cup, cost more than back home, wherever that is. A lot of that money filters down through the fingers of the ultra rich and powerful, and trickles down to those below. Just like here.

People in Rio and Brazil are the same as anywhere. They want the same things. Happiness, diversion, laughter, distraction, the so-called good things in life. A slightly larger piece of the pie. The World Cup is just a showcase and a distraction.

Bread and circus on a grander scale.

Award winning artist, photographer and freelance journalist, Douglas Herman enjoys exploring the occasional ghost town or spooky conspiracy and can be found wandering the back roads of America. Recently Doug finished writing, directing and producing an independent feature film, naturally a “road movie,” and credits STR for giving him the impetus to write well, both provocatively and entertainingly. A longtime gypsy, Doug completed a 10,000 mile circumnavigation of North America, by bicycle, at the age of 35, and still wanders between Bullhead City, Arizona and Kodiak, Alaska with forays frequently into the so-called civilized world of Greater LA.