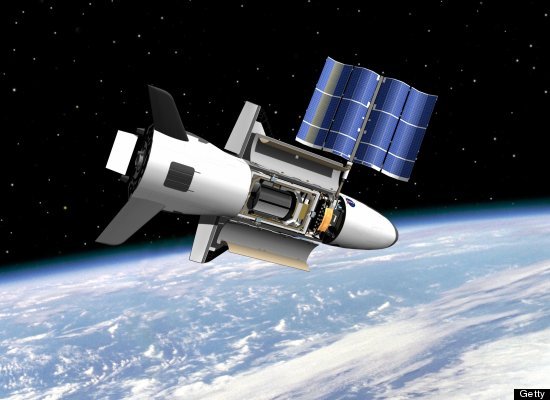 But the top-secret unmanned spacecraft continues to glide along its unusually low orbit nearly one year after it was launched in March 2011, leading Spaceflight magazine to suggest the vehicle is spying on a Chinese spacelab called Tiangong-1, the BBC reports.

The X-37B, also known as the Orbital Test Vehicle (OTV), is a 29-foot solar-powered craft NASA has been developing since 1999. In that time, the vehicle has been launched twice, including the most recent mission from which it has yet to return.

According to the Air Force, the craft’s purpose is to test “reusable spacecraft technologies for America’s future in space and operating experiments which can be returned to, and examined, on Earth.”

Since the Air Force took over operations of the shuttle in 2006, the Pentagon has remained mute on the program’s overall budget and plans, compelling amateur astronomers to keep an eye on its movements, The New York Times reported in May of 2010. They noticed the shuttle orbited over “global trouble spots” like Iraq, Iran, Pakistan, and North Korea.

According to the BBC, Spaceflight magazine cited the spacecraft’s advanced sensor technology and low orbit as evidence the shuttle is spying on the Tiangong-1, a satellite launched by China last year to carry out research as part of an effort to established a manned space station by 2020.

“The parallels with X-37B [and Tiangong-1] are clear,” editor Dr David Baker said in this month’s Spaceflight. “With a period differential of about 19 seconds, the two vehicles will migrate toward or against each other, converging or diverging, roughly every 170 orbits.”

But some experts doubt the X-37B is being used for surveillance, arguing that its orbit is in fact different from that of Tiangong-1 and that using it in a spy capacity would be impractical.

“I would go as far as to say, ‘no chance,'” Brian Weeden, a technical adviser with the Secure World Foundation and a former orbital analyst with the U.S. Air Force, told Space.com. “It’s not practical.”

He added that if the government wanted to spy on Tiangong-1, they have a “whole network of ground-based telescopes and radars, several of which can do imaging — either radar or optical imaging of space objects — that are better suited for this.”

Weeden conducted his own research on the X-37B in 2010 and concluded that the shuttles current function likely aligns with what the Air Force has already said: that it’s being used primarily to test out the technology.

But if the shuttle were being used to spy on Chinese spacecraft, Spaceflight’s Baker told BBC News there wouldn’t necessarily be negative consequences.

“If this is what the X-37B is doing, I think it really is no bad thing,” Baker told BBC News. “As with the Cold War, the proliferation of space surveillance systems enabled us to get arms agreements that would not have been possible without each side knowing fully what the other side was doing.”