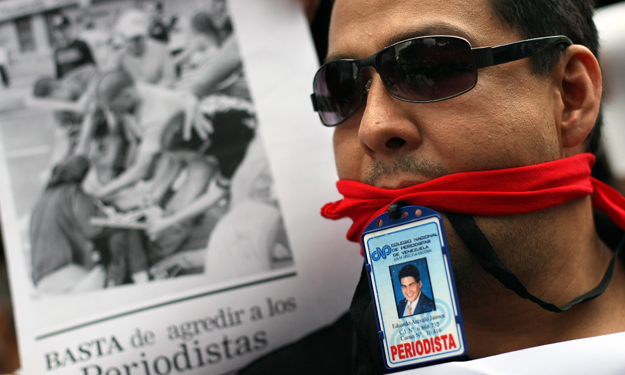 Latin America has never been a particularly accommodating environment for journalists, with threats stemming mostly from criminality (primarily of the narcotrafficking kind) and corruption, as practitioners of those dark arts are all too willing to eliminate anyone that dares to ask impertinent questions about their enterprises.

But things have taken a turn for the worse of late. More governments are starting to get into the act. These radical populists, which include Venezuela’s Hugo Chavez, Bolivia’s Evo Morales, and Ecuador’s Rafael Correa, are so determined to smash their respective ancien régimes and “refound” their countries that no opposition is brooked, and any media outlets not sufficiently supportive of their efforts must be put out of business — always under a patina of “legality,” mind you.

Not surprisingly, the primary culprit and ringleader in this regard is Hugo Chavez. On the very day of the subcommittee hearing, the owner of Venezuela’s last opposition television station was fleeing the country ahead of a government warrant for his arrest.

Guillermo Zuloaga of Globovisión has long been a target (he was briefly arrested in March for saying publicly that Venezuela lacked freedom of expression) because he has refused to knuckle under to Chavez’s pressure to broadcast only pro-government propaganda. In 2007, Chavez drove another independent station, RCTV, off the air by ordering that its license not be renewed. Since then, the few remaining outlets not controlled by the government have toned down any criticism of Chavez lest they meet the same fate.

Journalist support groups around the world have decried Chavez’s latest ham-handed attempt to silence his domestic critics, and the Obama administration weighed in with its own riposte: “We are seriously concerned in Venezuela about the arrest order for Guillermo Zuloaga,” State Department spokesman P.J. Crowley said this week. “This is the latest example of the government of Venezuela’s continuing assault on the freedom of the press.”

Chavez has responded vociferously to the administration’s criticisms (including those by Secretary of State Hillary Clinton during her recent swing through the region), claiming it is the Obama administration’s interventionist attitude that makes it impossible to have good bilateral relations, thereby placing it in the same position as — horror of horrors — the Bush administration.

So far, there is no indication the Obama administration is falling for this silly ploy. And that is a good thing. International affairs of state are not popularity contests, nor does one have to crawl down into the sewer with the likes of Hugo Chavez to get one’s point across, defend our interests, and stand with those who share our values. If the consequences weren’t so tragic for the Venezuelan people, one could almost thank Chavez for proving again those essential points