In the 10 years before his sudden death at 58 in 1987 Andy Warhol had more new, good ideas about making paintings than he knew what to do with. But he rarely let on.

“Self-Portrait (Strangulation),” a richly brushed grid of canvases by Andy Warhol in 1978.

Viewed in the unforgiving light of the New York art world, he had assumed the role of genius in decline or at least semiretirement. He was a celebrity in his own right, a gossip and shopaholic nonpareil, a magazine publisher and television personality and a besotted admirer of young ’80s art stars like Jean-Michel Basquiat. He was also an artist who accepted too many commissions, churning out works that diluted the Warhol brand.

During this decade the new series of paintings and prints that he exhibited most often were close to deplorable. The titles themselves speak volumes: The American Indian, Athletes, Torsos, Portraits of the Jews of the 20th Century, Dollar Signs, Knives, Guns, Myths, to name but a few.

Warhol was not ignorant of the poor reception of much of his new work; to some extent he agreed with his critics. He worried constantly about his legacy, the quality of his latest efforts and the imminence of death. He wondered whether he had made any good paintings since 1968, when Valerie Solanas attempted to assassinate him, leaving him seriously injured and, it seemed, permanently shaken.

So “Andy Warhol: The Last Decade” at the Brooklyn Museum begins on a perfect note: with the 1978 “Self-Portrait (Strangulation),” a richly brushed grid of 10 small canvases, each printed with an image of the artist with someone’s hands grasping his neck. His mouth is open in alarm, his eyes gaze upward as if seeking heavenly intercession. As Joseph D. Ketner II, the show’s organizer, notes in his catalog essay, this is a long way from the alternately pugnacious and aloof self-portraits that Warhol made in the 1960s and 1970s.

Given that the exhibition, which originated at the Milwaukee Art Museum, ends with three more equally shaken self-portraits from 1986, you may feel that Warhol’s demons never subsided. But by then you may have some notion that he did everything he could to keep them at bay. He threw himself into painting with a vengeance, grappling with it with a vigor that was nearly unprecedented in his career. He broadened the medium for himself and also made it more deeply personal, more reflective of his love of physically making art, his politics, his homosexuality and his religiousness.

“Andy Warhol: The Last Decade” is a revelatory, even mind-boggling effort, if also decidedly flawed. While few of Warhol’s better paintings from this period received much exposure during his lifetime, there have been many gallery exhibitions since — especially a stunning succession of shows at various Gagosian galleries in New York. But this is the first try by an American museum to come to terms with the full range of Warhol’s best late work, rather than to celebrate (and sell) it one series at a time.

Unfortunately this show is spread thin, its 45 canvases, many on the small side, representing a dozen different painting series. In addition, the exhibition has been rent asunder. About a third of the paintings are relegated to low-ceilinged galleries on the ground floor, where the show starts, and where they are interspersed with blaring videos exemplifying Warhol’s involvement with television. The first impression is of a hellish orientation gallery. The remaining works enjoy high-ceilinged splendor on the fifth floor.

Luckily Mr. Ketner has a good grip on his subject. His essay, written in plain English, is a great help in getting the most out of his show. It retraces the evolution of the paintings on view and the increasingly close collaborative methods of Warhol and his studio assistants. It also provides a vivid sense of Warhol’s relatively vulnerable frame of mind, his yearning for approbation and his encounters with old master painting, which helped revive his own interest in painting.

The show’s opening gallery makes it quite clear that as the ’70s drew to a close, Warhol was not averse to recycling golden oldies. In a luscious black-on-black painting from 1978 he simply reverses a quad of his famous images of Marilyn Monroe, creating ghostlike negatives.

But for the most part the works downstairs attest to a willingness to depart from established comfort zones. Warhol abandons the signature one-two technique in place since the early 1960s — fields of brushy color silk-screened with large, grainy photographic images — for more hands-on approaches. And he tackles abstraction, the language of his first artistic heroes, the Abstract Expressionists.

These spaces contain two small examples of Warhol’s ravishing Oxidation Paintings, from 1977, in which the brush-free method consisted of men and (it turns out) women urinating on canvas treated with metallic copper paint, to create an amazing fluorescences of golds, greens and blacks in a range of splatters and puddles that evoke Jackson Pollock’s drip paintings.

This is abstraction but reality based, as are the mysterious Shadows paintings. Their dark conical shapes and beams of color are derived from a photograph of cut-out poster board taken in the studio; they share qualities both with Franz Klein’s abstractions of the ’50s and the abstract photographs made by James Welling, an emerging Pictures artist, in the late ’70s. Commercial work had its benefits as in the Pollock-like images based on tangles of unraveled yarn, the result of an advertising commission from the Florentine yarn-maker Filpucci

Perhaps the most beautiful works here are two small canvases, both titled “Abstract Painting” and made using silk-screen but no photographic image. Ethereal loops of one pale color drifting across clouds of others, suggest languid wrist action, even though it is hard to figure out exactly what is printed and what is painted.

Upstairs the show breaks loose, as Warhol and his studio colleagues devise new hands-off techniques and new kinds of reality-based abstraction with the magnificent Rorschach paintings of 1984 and the slyly decorative Camouflage paintings of 1986. In addition Warhol’s friendships with Basquiat and Francesco Clemente culminate in collaborations that have him painting and drawing on canvas for the first time since his earliest Pop efforts.

The idea for the Rorschach paintings came from Jay Shriver, Warhol’s studio assistant, in response to a perennial request: “We need a new idea.” (Warhol’s “we” was simultaneously royal and collective.) Mr. Shriver proposed Rorschach blots and then made several small ones in the conventional inking-and-folding manner that harks back to the blotting technique that distinguished Warhol’s advertising work in the 1950s. 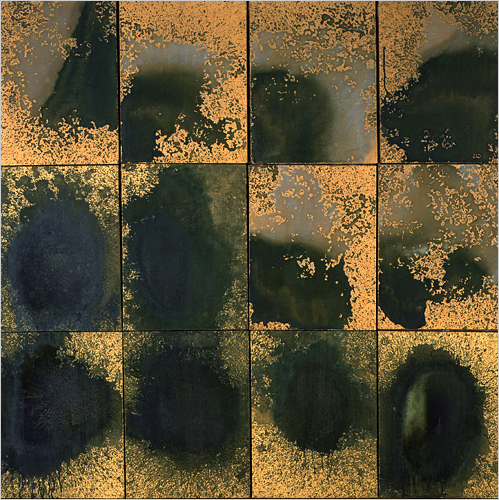 “Oxidation Painting (in 12 parts),” acrylic and urine on linen, 1978, an example of Warhol’s brush-free method.

These became the models for enormous paintings — the two here are more than 11 feet high — made exactly the same way but with paint, huge sheets of canvas and a larger work force. One has the planar expanse of a ship’s sail or pine tree. The other, more linear, resembles a bit of ancient ironwork, a butterfly or a fanciful account of the body’s internal organs.

At every point here more examples would have been better. But Mr. Ketner has made some excellent choices. The two paintings made with Basquiat show that both artists understood how to pit words, images and empty canvas against one another. In one, Basquiat turns a large rendering of dentures appropriated by Warhol from an advertisement into a regal mask. A third, smaller work, “Origin of Cotton,” which Mr. Clemente also worked on, is dense and not as distinctive — a generic ’80s painting. Yet it is marvelous, especially in its ripe colors.

Two small Camouflage paintings, both made with the same swatch of amoeboid designs, convey Warhol’s ability to find variety within narrow means. One is a combination of red, purple, pink and white that is all sharp-edged turmoil. The other is a series of lavenders and blues whose soft optical buzz hovers somewhere between Chinese silk and Chinese landscape painting.

Especially intriguing are a series of mostly black-and-white works in which Warhol, inspired perhaps by David Salle, starts using a projector to draw and paint existing motifs directly onto the image. In many ways they return to his earliest Pop paintings, full of Abstract Expressionist splashes and drips that friends told him to abandon in favor of the silk-screen images. But they are harsher and more pointed.

This imperfect show is also highly selective. Its 45 paintings represent around 1 percent of the more than 3,500 that the Andy Warhol Foundation estimates Warhol produced during his last decade. Still, the show floats a startling idea: Warhol made some of his best paintings during these years. Spurred by his sensitivity to criticism, by the example of younger painters he had influenced and perhaps by his own boredom, he became more fully himself as a painter, retrieving and expanding upon parts of his sensibility left behind in his rush to become Andy Warhol, Pop artist.