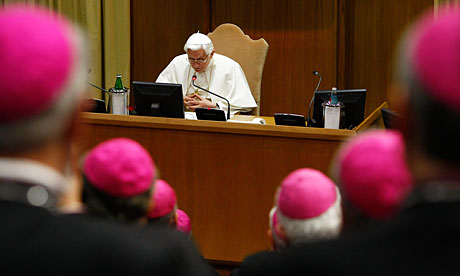 The pope delivers a speech at the conference of Italian bishops at the Vatican. Photograph: Pier Paolo Cito/AP

Forty women send unprecedented letter to pontiff saying priests need to ‘experience feelings, love and be loved’
Dozens of Italian women who have had relationships with Roman Catholic priests or lay monks have endorsed an open letter to the pope that calls for the abolition of the celibacy rule. The letter, thought by one signatory to be unprecedented, argues that a priest “needs to live with his fellow human beings, experience feelings, love and be loved”.

It also pleads for understanding of those who “live out in secrecy those few moments the priest manages to grant [us] and experience on a daily basis the doubts, fears and insecurities of our men”.

The issue was put back on the Vatican’s agenda in March when one of Pope Benedict’s senior advisers, Cardinal Christoph Schönborn, the archbishop of Vienna, said the abolition of the celibacy rule might curb sex abuse by priests, a suggestion he hastily withdrew after Benedict spoke up for “the principle of holy celibacy”.

The authors of the letter said they decided to come into the open after hearing his retort, which they said was an affirmation of “the holiness of something that is not holy” but a man-made rule. There are many instances of married priests in the early centuries of Christianity. Today, priests who follow the eastern Catholic rites can be married, as can those who married before converting to Roman Catholicism from Anglicanism.

One signatory, Stefania Salomone, 42, an office manager, said the message to the pope had been endorsed by nearly 40 women registered with an online forum linked to Il Dialogo website. But such was the sensitivity of the issue that only three had published their names.

The letter was posted on the internet on 28 March. But it was only reported on Wednesday by the online international news agency, globalPost.

Salomone said that because Catholics were taught to look up to priests, women dropped by their priest-lovers “often lose their faith in men altogether”. Her own five-year relationship had been platonic, but Antonella Carisio, one of the other signatories, said she had an affair with a Brazilian priest who frequently slept at her house.

When their relationship was discovered by another priest, he was transferred to Rome. “When he left, he even gave me an engagement ring,” she said.

But he subsequently returned to Brazil and this week told the globalPost news agency: “She was a friend and a confidante, but I was never in love with her.”