Oil Slick in the Gulf of Mexico

The Deepwater Horizon oil rig exploded on April 20, 2010, killing eleven men. The oil rig then sank on April 22, 2010. Since then, oil has been spilling into the Gulf of Mexico. Attempts to stop the oil spill have been met with only limited success.

In an interview with CBS, BP’s CEO said that while things are looking good in its efforts to stop the oil leak using a “top kill” method that involves pumping a lot of mud into the well, it’s still far too early to tell whether it will hold. There are several steps in the process. On Thursday, the company finished a phase of pumping heavy mud into the well. Early Friday, engineers tried what is known as the “junk shot” method, in which debris, including golf balls and shredded rubber, are injected into the blowout preventer. Later in the day, the company will continue pumping mud into the well and it will likely have to wait until Sunday to know whether this latest effort was successful. If it works, the company will then pour cement on the well to seal it shut, notes the Associated Press. BP’s CEO, Tony Haward, said the company thinks the chance of the method working stands at around “60 or 70 percent.” Others aren’t so confident, putting its odds of success at around 50 percent. Although it has worked in the past, no one has ever tried this technique at such depths before. Meanwhile, President Obama is traveling to the Gulf Coast Friday, as criticism continues to grow over whether the government has done enough to stop the spill that is now officially larger than the Exxon Valdez disaster. BP announced it has spent $930 million to deal with the consequences of the disaster, but that is hardly comforting to Americans who are growing tired of the spill that has been going on for more than a month. It marks the president’s second visit to the area since the Deepwater Horizon exploded and comes a day after he promised to “get this fixed.” In his daily Playbook, Politico’s Mike Allen cites CNN’s Ed Henry describing the president’s visit as a “moment of truth” because “the White House is VERY NERVOUS right now that more Democrats are going to start coming forward, demanding a more hands-on role from the president if this so-called top-kill procedure does not work.” As Reuters points out, the problem is that while Obama may want to act like he’s in charge, the truth is that the government doesn’t have the tools and technology to deal with this kind of disaster.

Every spring, Breton Island fills with the sounds of 40,000 nesting birds. Pelicans, terns and skimmers arrive in April and stay through July, or until their eggs hatch and their offspring can fly. But this year is different, as millions of gallons of oil swirl offshore.

Weeks ago, a small army of workers arrived to try to protect the fragile avian population from what could be a devastating disaster, as the Deepwater Horizon well continues to spew. They laid out layers of boom along every inch of the tiny island both onshore and off. BP employees monitor the situation from a temporary platform nearby.

Biologist James Harris, with U.S. Fish and Wildlife Services, has spent two decades at the Breton National Wildlife Refuge. “We’ve found 3 [live] oiled birds so far,” he tells a small group of journalists on a tour. “You can’t go chasing the lightly oiled birds through the nesting areas, because they can still fly. Trying to rescue them can disturb the other birds. If the pelican nests are disturbed, the eggs can get kicked out of the nests. The gulls will eat them.”

The 25-mile boat ride from Venice, La., takes less than an hour, and when land is spotted on the horizon, photographers pull out long lenses to try to get a glimpse of nesting pelicans, hidden in tall green sea grass.

But the first bird the group encounters is wrapped in a plastic bag: a dead brown pelican discovered by FWS enforcement officer Raul Sanchez only moments before. Its lifeless form and blood-soaked feathers can still be seen through the plastic as Sanchez tags the bag and hands it to a U.S. Coast Guard official. “Any dead bird that we find would be considered evidence,” Sanchez explains. “I saw a little oil residue on its wings.”

Sanchez and others also rescue a Laughing gull floundering in the sand, bobbing its head, unable to fly. Although no oil is visible, it will be taken for testing along with two other dead gulls found closer to the nesting area.

It is not unusual to find some dead birds in a colony this large. Harris speculates that the dead pelican probably got oiled while feeding in waters farther offshore. “Imagine wrapping yourself in a wet blanket to try to stay warm,” he explains when asked what happens when feathers meet fuel. “The oily feathers disrupt the birds’ insulation system.”

“We’ve been involved with oil spills before, but this is the biggest one we’ve ever responded to,” Harris says. “Most of them are very small, sometimes only one barrel.”

As he motors back toward Venice, he adds: “We’ve been very fortunate so far, with the winds, tides and currents, that the oil hasn’t reached the island. I just hope they get it shut off pretty quick.” 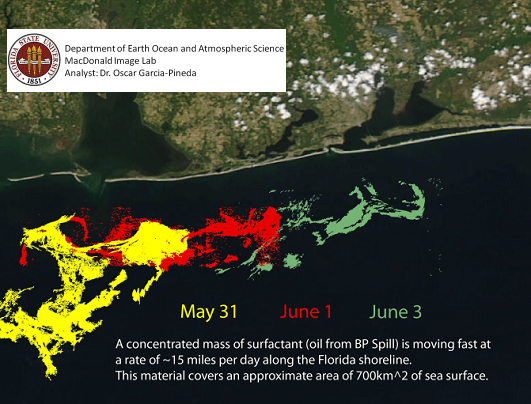